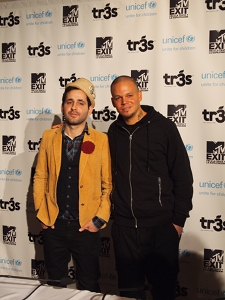 UNITED NATIONS, Nov 27 2011 (IPS) - It happens every day across the globe, with many of its young victims lured by false promises into the world’s third most profitable criminal activity. This is human trafficking.

While human rights groups say it’s hard to pinpoint an exact statistic, the International Labour Organisation has estimated that around 2.4 million people worldwide have become trafficking victims. In Latin America and the Caribbean alone, more than 550,000 children have been trafficked.

Hahn told IPS that poverty, violence and lack of education are the main issues leading young people to fall into trafficking.

“While it is hard to quickly change these underlying causes of trafficking or exploitation, UNICEF is trying to install more knowledge and awareness around the issue,” she said. “Young people are looking for opportunities overseas for study or work and this is how (others) can exploit them.”

“This is one of the most pressing issues drawing young people in and we need to educate them to have a better understanding of situations to avoid and how to prevent themselves from being exposed.”

Hahn said UNICEF has linked trafficking around the world with migration, especially in Latin America, from where there is a strong flow into the U.S.

However, migration can be internal as well, Hahn said. “This could happen when people migrate from rural to urban areas. There have been times when some children get stuck in Mexico when they travel from Central America to the U.S.”

In mid-November, UNICEF launched a new campaign to tackle the issues of trafficking, exploitation and HIV in Latin America, joining forces with MTV Latin America and TR3S to create MTV EXIT.

The campaign will primarily use social media outlets and a documentary, to be broadcast on MTV Latin America and debuting Nov. 29. It will also enlist the help of Calle 13, a band that has won multiple Latin Grammy awards, to help spread the message to youth.

“We have been working with Calle 13 over the past few months on the production of the documentary and music video and we feel that this collaboration is going to have a strong impact on the issue,” Simon Goff, CEO of MTV EXIT, told IPS.

“We believe Calle 13’s involvement will have a big impact in engaging and inspiring youth on this issue,” Goff added, citing the group’s credibility among both Latin American and U.S. audience and their commitment to the issue.

Rene Perez Joglar, who makes up half of the band, said at a press conference on Monday that he was drawn to the campaign when he found out about victims of child labour and those being sexually exploited.

Joglar likened the situation in Latin America to the 21st century version of slavery, calling it devastating, “because children are the future of every country’s development.”

Hahn said prevention through education was the best chance of decreasing trafficking numbers.

“We created the documentary, particularly targeting Latin America, after the success of similar campaigns by MTV EXIT in Asia and Eastern Europe,” she said.

“This way we don’t have to recreate the wheel, just adapt it for Latin America. The main message is to be aware through an effective campaign. We are also utilising social media networks to spread the word.”

Bernt Aasen, UNICEF regional director for Latin America and the Caribbean, said the partnership provided key cultural references for young people and allowed the organisation to reach millions of potential victims by communicating with them directly, using their language.

“Increasingly adolescents and young people are vulnerable to being trafficked and exploited in the region,” said Aasen. “We can reduce the risks they are exposed to if we provide them with the necessary education and tools to protect themselves.”

Goff, of MTV EXIT, added that the partnership created a powerful combination to effectively promote social change. “These programmes, we hope, will only represent the first step in a long term commitment to combating trafficking in Latin America,” he told IPS.

“It will help us a lot because they are the biggest band in Latin America. They are at their peak and they have a very powerful and direct contact with young people in their region. When a message comes from someone you look up to, it will have an entirely different impact.”