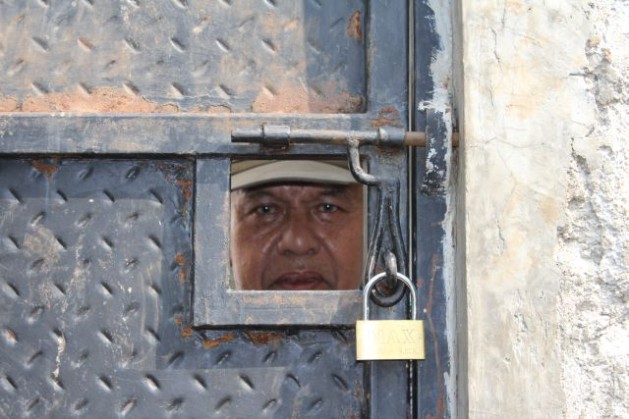 The caretaker at the Al Misbah mosque in Bekasi looks through a hole of the sealed door. Credit: Rebecca Lake/IPS

JAKARTA/NEW YORK, May 31 2013 (IPS) - Standing in front of the two-metre concrete wall, barbed wire and corrugated iron fence that surrounds his mosque, Muhammad Iqbal says he feels like a second-class citizen in his own country.

The head of a beleaguered Ahmadiyya Muslim sect in the Bekasi, West Java was forced out of his mosque in April after local authorities shut it down following protests from Islamic hardliners.

“The Yudhoyono government’s failed to confront militant groups whose thuggish harassments and assaults on houses of worship and members of religious miniorities has become increasingly aggressive." -- HRW's Andreas Harsono

The Al Misbah mosque in Pondok Gede, about an hour away from Indonesia’s capital Jakarta, was barricaded with an iron sheet by the local municipality to prevent its members from entering.

Sixteen people from the Ahmadiyya community remain locked inside as a means of protest, relying on the community to throw food and supplies over the high barricade.

“I feel uncomfortable because there is no freedom to practice religion,” Iqbal told IPS on Tuesday in front of his mosque, which has been offering a place of worship since 1998.

“The head of the Satpol PP [regional public order agency] said that we couldn’t practice here. But we have nowhere else to go. As an Indonesian, we should get the same treatment. We are very sad and uncomfortable.”

This situation experienced by Bekasi’s Ahmadiyya is certainly not an isolated one.

In the same province as the Al Misbah mosque, local authorities demolished a Christian church in March after they claimed the congregation did not hold a valid building permit to worship.

Pastor Torang Simanjuntak of the HKBP Taman Sari church in Setu, could only stand back and cry with his congregation as they watched the destruction unfold before their eyes.

“Where is your heart and feeling Mr. SBY?” a congregation member screamed in reference to Indonesia’s President Susilo Bambang Yudhoyono before the church was knocked down.” When people cry out in other countries, people will hear. But when we cry out in our own country, people don’t hear us.”

Intolerance on the rise

International world leaders have often praised the archipelagic nation, which requires its citizens to choose from one of only six official religions, as a model for religious harmony.

But recently human rights groups have documented a rise in religiously motivated conflict and discrimination. Attacks on minority religious groups including Ahmadiyahs, Bahai, Christians, and Shia Muslims have increased, from 244 violent attacks in 2011 to 264 in 2012 according to the Jakarta-based Setara Institute.

Many critics, including international rights group Human Rights Watch, point to the government’s “inaction”, “complicity” and the nation’s discriminatory laws which include permit regulations for houses of worship and the highly controversial 2008 Ahmadiyya decree, which bans the minority Islamic faith from propagating their belief.

But Indonesia’s secretary general for the Ministry of Religious Affairs, Bahrul Hayat, dismisses any ideas of intolerance in his country, deeming the nation a model place of religious harmony.

“In Indonesia, the process of democracy I think gives open space to everybody and of course there are limitations,” Hayat explained. “So I don’t see that this [intolerance] is appropriate to label this as an increase in terms of religious conflict in the country.”

Indonesia is among the top 15 countries in the Pew Research Center’s 2012 social hostilities index, which monitors religious freedom of 197 countries, and is listed as a country with “very high government restrictions on religion,” alongside Afghanistan and Sri Lanka.

Daniel Baer, the U.S. Department of State’s deputy assistant secretary for the bureau of democracy, human rights and labour, who was a witness at last week’s Human Rights Commission Hearing on Indonesia in Washington D.C., acknowledged that Indonesia’s issues regarding religious intolerance were complicated.

He highlighted a combination of factors that are fueling the issue which he said included “deep societal prejudices which are something that won’t be solved in the short term by the government.”

However, Baer noted that despite the complexity there were certainly proactive actions that the government could and should take now.

“There are steps the government can take including repealing blashphemy laws. They can change the laws regarding the anti-Ahmadiyya decree in 2008. Laws send a signal. They not only have a direct implication but they send signals to the broader community about who counts and who deserves sole protections.”

After significant criticism from Indonesians, which included protests and petitions, Yudhoyono accepted the World Statesman award in recognition of his work to support human rights and religious freedom in the country.

The Foundation, whose officials declined to be interviewed for this story, instead issued a statement explaining their decision to honour Yudhoyono.

“As the first directly elected President of the world’s most populous Muslim Country, President Yudhoyono is recognized for his pursuit of peace and helping Indonesia evolve into a democratic society and an opponent of extremism,” the Foundation said.

An IPS request for comment from the Indonesian Mission to the United Nations was not responded to by deadline.

However, John M. Miller, National Coordinator for the East Timor and Indonesia Action Network, who organised the protest, told IPS there has been little willingness to prosecute previous human rights abuses.

“[ETAN’s] position is that the Indonesian Foreign Ministry has been asked to find awards for the president, and are trying to burnish his image as a statesman and humanitarian” before he leaves office, Miller said.

Kurnia Hutapea, an architect, traveled from Baltimore to attend the protest. A Christian, his family had their church destroyed in Indonesia.

“To [have to] get a permit to build churches, that’s not freedom of religion at all, and that’s why I smell something behind this award,” Hutapea told IPS.

“The Yudhoyono government’s failed to confront militant groups whose thuggish harassments and assaults on houses of worship and members of religious miniorities has become increasingly aggressive,” Harsono told IPS.

Iqbal said on Tuesday that he hoped the award would be an incentive for improvement.

“Wouldn’t it be nice if the president could fix religious intolerance in his own country first?” the Ahmadiyya leader said.

“He is happy to help other countries fight intolerance like in Myanmar, but he needs to fix intolerance problems in his own country first. He hasn’t directly instructed his government to fix the problems.”

It would be OK for him [the president] to accept the award, but he has to solve the problems of minorities before he decides to go,” Az told IPS, who gathered with minority groups on Sunday to present a mock award to the president showcasing images of intolerant acts from across the country.

“He’s saying that this is for the Indonesian people, but all these minority groups’ problems have not been solved.”