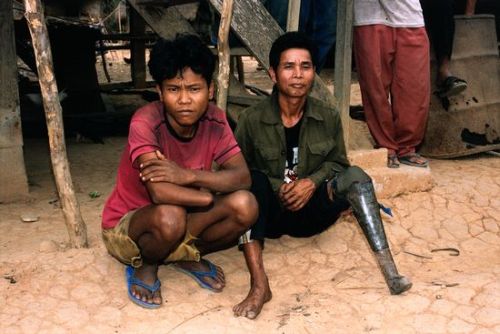 UNITED NATIONS, Nov 18 2011 (IPS) - Deliberations are underway for a United States-backed proposal to allow the continued use, production, trade and stockpiling of cluster munitions at the Fourth Review Conference of the Convention on Conventional Weapons (CCW) in Geneva.

Delegates from some 100 countries have been meeting since Monday and will continue until Nov. 25 to consider whether to allow a controversial new protocol to the CCW permitting the use of cluster munitions produced after 1980.

Cluster munitions are an indiscriminate weapon designed to break open mid-air and release between a dozen and a few hundred sub-munitions. Each is the size of a soda can and impacts an area as large as several football fields.

When the sub-munitions explode, they fire hundreds of fragments of metal that travel at the speed of a bullet, which can kill or seriously injure anyone in the area.

The CCW currently bans the weapons, requires destruction of stockpiles within eight years, and mandates clearance of areas contaminated by cluster munitions within 10 years and assistance to victims.

In his opening statement, the U.S. delegation head Phillip Spector said, “A CCW protocol based on this (new draft) text offers the only chance of bringing the world’s major cluster munitions users and producers — who represent between 85 and 90 percent of the world’s cluster munitions stockpiles, and are not in a position to join the Oslo Convention — into a legally binding set of prohibitions and regulations.”

“In other words, the pre-1980 rule alone will prohibit more cluster munitions for the United States than the Oslo Convention has prohibited for all of its member states combined. We know the protocol will have a strong impact on other states as well,” he said.

However, several prominent humanitarian organisations say the draft is unacceptable and would inevitably cause more civilian deaths.

“We have gone through this process in creating the Convention on Cluster of Munitions (also known as the Oslo Convention), this strong treaty, to protect civilians from the harm that cluster munitions can cause,” Zach Hudson, coordinator of the U.S. Campaign to Ban Landmines and Cluster Bombs for Handicap International, told IPS.

“This backslide is really unacceptable. In the concept of protecting civilians, we have the strongest law possible – we already have that, there is no point in creating cover for the country. It essentially undermines the norm that’s been created by the Convention on Cluster Munitions, so it’s weaker than the national legislation,” he said.

Hudson said the U.S. should stop backing the proposed CCW protocol and discontinue pressuring other states to support an international law “which is far less stringent”.

Steve Goose, Cluster Munition Coalition chair and executive director of the Human Rights Watch Arms Division, agreed. “Cluster munitions were banned three years ago due to the unacceptable harm that they cause to civilians,” said Goose. “It’s reprehensible to even consider creating another law allowing their use.”

Emma Ruby-Sachs, campaign director at Avaaz, said hundreds of thousands of people across the world have raised their voices in support of the hard-won treaty to ban cluster bombs.

“They are calling on their governments to stand up to U.S. bullying and ensure these cruel and indiscriminate weapons aren’t reintroduced at this week’s meeting, endangering innocent lives.”

“By destroying stockpiles, carrying out clearance operations and adopting new laws, the state parties have made considerable efforts to adhere to this treaty,” said Paul Vermeulen, advocacy and international relations manager for Handicap International.

“After just one year in force, the progress made is outstanding. Adopting this protocol would constitute a huge step backwards in international humanitarian law. A setback of this significance is unprecedented. States using cluster bombs are hiding behind this text to legitimise their use of these weapons, 98 percent of whose recorded victims are civilians.”

The report notes that in 2010, state parties destroyed almost 600,000 cluster bombs that contained more than 64.5 million cluster munitions. Almost 60,000 unexploded cluster munitions were destroyed in decontamination operations throughout the world and 18 million square metres had been cleared of mines.

While 31 countries or territories remain contaminated by cluster munitions, more than half are already committed to abolish these weapons by becoming state parties to the treaty, including Afghanistan and Lebanon.

However, two non-state parties, Libya and Cambodia, used cluster munitions this year, and at least 16,921 cluster munition victims have been identified worldwide – with more victims that remain unreported.

Of the 119 countries that have joined the CCW, 76 have also joined the Convention on Cluster Munitions and are bound by the higher standards. But even though some of these nations have banned the weapons, including France, Australia, Germany and the United Kingdom, they have also supported the new protocol.

Hudson told IPS that most older cluster munitions have already been destroyed, and that recent incidents of cluster munition use by Thailand, Cambodia, the U.S., Georgia and Russia involved weapons produced after January 1980.

Other issues include the use of cluster munitions with a safeguard mechanism, a self-destruct option for munitions left unexploded on the ground, and a deferral period of 12 years to allow states to continue using cluster munitions that will later be banned by the protocol.

“If you speak to states who support this, they will say something like, this will capture states who are not part of the Convention on Cluster Munitions, but this is very misleading because it doesn’t actually bind them to very much, it binds them to the weapons they wouldn’t use anyway and even the requirements are optional,” Hudson told IPS.