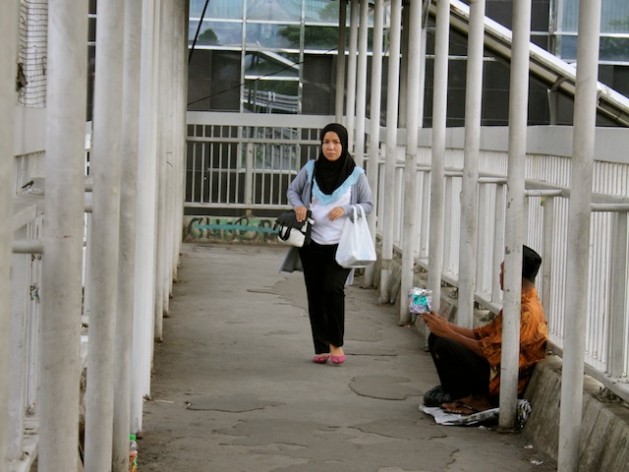 JAKARTA, May 13 2015 (IPS) - Every afternoon, Wahyu sets up his wooden food cart by the side of a busy road in Central Jakarta to sell sweet buns, known as ‘bakpao’, to people passing by. In a good month, the street vendor can make around 800,000 rupiah, which amounts to roughly 62 dollars.

Across the road from where Wahyu hawks his wares stands one of the many malls that dot Indonesia’s capital city, home to 9.6 million people, filled with high-end designer labels like Louis Vuitton, Chanel and Gucci.

"We [...] need the government to take a welfare approach to make sure that our low-income workers are protected." -- Said Iqbal, chairman of the Indonesian Trade Union Confederation (KSPI)
Despite Wahyu’s position literally opposite the entrance to the plaza, it’s unlikely he will ever step foot inside it, let alone shop there.

Indonesia’s wealth gap has widened over the years, with the nation’s Central Statistics Agency (BPS) revealing that the country’s Gini index – a ratio measuring wealth distribution on a scale of 0-1 – increased from approximately 0.36 in 2012 to 0.41 in 2014.

While some are making their fortunes in this Southeast Asian nation of 250 million people, scores are languishing in destitution.

When Indonesia’s President Joko Widodo came into office last October, he pledged to work towards minimising the country’s income inequality.

At the same time, the president, who is fondly known as Jokowi, emphasised that he was keen to boost the investment appeal of the world’s fourth most populous country, a plan that has some trade unions on edge, fearing the impact of unchecked foreign investment on a vulnerable workforce.

“We agree with the government’s plan to invite investors as we need investment for economic growth in the country. We support him,” explains Said Iqbal, the chairman of the Indonesian Trade Union Confederation (KSPI).

“But we also need the government to take a welfare approach to make sure that our low-income workers are protected,” he tells IPS.

The nation’s average minimum wage is around 1.5 million rupiah, the equivalent of 115 dollars, according to data from BPS.

Each province or district sets their own minimum wage in line with the amount needed for workers to achieve a decent standard of living. The current rate for the capital city is 2.7 million rupiah per month, about 206 dollars, a figure that labour unions argue is not in line with the rising costs of basic needs.

“We [labour unions] have met with Jokowi and we welcome his vision. But we haven’t seen any action; we need him to implement policies. We need to see wages increased to reflect the increase in oil prices and consumer goods.”

As pointed out in a January 2015 report by the International Labour Organisation (ILO), one in three regular employees – or 33.6 percent of the total workforce engaged in full-time work – receives a low wage.

While low wages in some emerging economies can symbolise a workforce about to move into a higher income bracket, “for many Indonesian workers low-wage employment tends to be the norm, rather than a springboard,” the ILO found.

The report also found that 45.9 percent of regular wage employees were “receiving wages below the lowest wage that is permissible by law in August 2014.”

Sharan Burrow, the general secretary of the International Trade Union Confederation (ITUC), tells IPS that Indonesia is not doing enough to tackle the country’s rising inequality or its growing informal economy – two things she says pose economic and social risks.

“The unions here have fought the low-wage culture for many years […]; it is still not a wage on which people can live with dignity against rising costs for basic needs,” Burrow, who was in Jakarta for the May Day celebrations, explains.

“Likewise, social protection is still not deep enough and is not universal.”

According to the World Bank, employment growth has been slower than population growth, while “public services remain inadequate by middle-income standards.”

Health and infrastructure indicators are also poor, and the country is a ways off from achieving the Millennium Development Goals (MDGs), the United Nation’s poverty-reduction blueprint that is set to expire at the end of the year.

For instance, the country continues to be plagued by high infant and maternal mortality ratios, with 228 infant deaths and 190 maternal deaths for every 100,000 live births.

Meanwhile, only 68 percent of the population has access to improved sanitation facilities, far short of the MDG target of 86 percent.

With 153.2 million people – or 62 percent of the total population – living in rural areas without easy access to medical, educational and financial institutions, experts say there is an urgent need for the country to devise schemes that will allow a more equitable sharing of wealth among its people.

While some analysts say Indonesia’s low wages act as a magnet for investment, business insiders disagree.

“The business community is aware that low wages are no longer the attraction they used to be,” says Keith Loveard, a senior risk analyst with Concord Consulting in Jakarta, adding that increased inequity over the past decade has seen the bottom 50 percent of the population make very few gains.

The government could reverse this tide by tackling bureaucratic bottlenecks in various sectors.

According to Loveard, “Indonesia’s logistics costs make up more than a quarter of production costs and the only way companies can deal with that is to squeeze workers. So realistically, until you lower logistics costs with better infrastructure and cut the red tape, it’s very difficult to do business in areas such as manufacturing that create lots of jobs.”

Indonesia’s manufacturing sector is the second largest contributor, after the service sector, to regular wage employment and a strong factor for economic and employment growth in the country, according to the ILO.

Organisations like the World Bank, which estimate that Indonesia has one of the fastest rising rates of income inequality in the Southeast Asian region, say that unless the country adopts social protection programmes for the poorest people, and invests in infrastructure that will enhance their productive capacity, Indonesia will find itself losing social, political and political cohesion in the years to come.