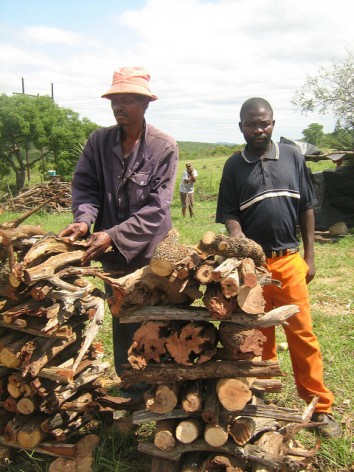 Moses Ginindza (l) and Mphumuzi Magwagwa, Swazi firewood vendors. While wood poaching is illegal under environment laws in many African countries, researchers note that nothing is being done in providing alternative sources of energy to curb deforestation.Credit: Mantoe Phakathi/IPS

BULAWAYO, Zimbabwe, Jun 2 2014 (IPS) - Despite a raft of legislation dealing with the environment, African countries are still falling short when it comes to enforcing the legal instruments that respond to challenges posed by climate change, researchers say.

“Most African countries have robust legislation on the environment. But good on paper as they are, they fall far short of implementation,” Samuel Ogalla, programme manager at the Pan African Climate Justice Alliance (PACJA), a coalition of civil society organisations from the continent, told IPS.

Many countries have acts of parliament and statutory laws in place that, for example, punish those contributing to global warming. Deforestation is a huge challenge towards implementing Reduced Emissions from Deforestation and Degradation (REDD+) programmes and while wood poaching is illegal under environment laws, researchers note that nothing is being done to provide alternative sources of energy to curb deforestation.

While there has been a push to familiarise African parliamentarians on climate change issues to assist them with drafting climate legislation for their local realities, existing country laws have also failed to follow up on climate change concerns.

“African countries need to go beyond mere crafting of environmental laws to full implementation of such laws with clear monitoring, reporting and verifiable mechanisms if the continent must address climate change and other environmental challenges facing the region,” Ogalla said.

One such example is Zimbabwe. According to the United Nations Framework Convention on Climate Change (UNFCC), this country has one of the most comprehensive environmental legislations in southern Africa.

Yet Zimbabwe faces huge drawbacks in addressing and meeting its REDD+ commitments because of decades-long deforestation.

Heinrich Böll Stiftung Southern Africa, the German Green Political Foundation, says Africa lacks comprehensive legal frameworks and this “may present barriers to the implementation of adaptation responses, and possibly increase the vulnerabilities of certain groups such as women and the poor.”

The organisation has also noted that while there are campaigns to raise climate change awareness, there has been “fewer investments in legislative aspects.”

Researchers say this has relegated the climate change drive to the periphery of public policy at a time when the call is for African countries to domesticate international conventions of which they are signatories such as the UNFCC.

Laws must go beyond punishing wood poachers and polluters to addressing the core issues, says Charles Ndondo, director of Carbon Green Africa, a company established to facilitate the generation of carbon credits through validating REDD projects in Zimbabwe.

“Legislation to address climate change issues [in Zimbabwe] has always been there if you consider the Forestry Act … and various legislations which deal with the environment,” Ndondo told IPS.

“The only challenge with these acts is that they are more punitive rather than addressing the root causes of climate change. The Forestry Act prohibits people from cutting firewood for fuel purposes but does not provide alternatives and hence the challenge,” he said.

The South African-based Trade Law Centre, in recommendations to Africa’s regional blocs, including the Southern African Development Community, East African Community, and the Common Market for East and Southern African, noted that the constraints that African countries face in implementing successful strategies to address climate change include “weak institutional and legal frameworks.”

“Regional and national legal frameworks can enable countries in the region to build adaptive capacity and reduce their vulnerability to the effects of climate change,” the centre observed.

These are the “bottlenecks” GLOBE International legislators across the continent are trying to address, says Innocent Onah, director of GLOBE Nigeria.

GLOBE International brings together parliamentarians across the world and helps them draft laws “in pursuit of sustainable development” and convenes the World Summit of Legislators to advance relevant climate legislation.

“While it may be correct that without climate change legislation a lot would not be achieved domestically, I am of the opinion that even where laws exists, if there’s lack of capacity to implement or enforce the laws, we are back to square one,” Onah told IPS.

“Legislation is one of the tools that governments can use to tackle climate change problems, in Africa, [but] the major issue is not the absence of laws but lack of resources and the political will to implement established laws and policies,” he said.

While Onah observed that “parliamentarians from different countries have different levels of environmental competencies,” PACJA’s Ogalla says that more laws are not necessarily the answer.

“More and new legislation are being crafted on environment across the continent but the irony is that with all these laws, the continent still remains the vulnerable hot spot to climate change and other environmental problems,” Ogalla said.

Domesticating international agreements allows “countries [to] forge ahead with distinctive national actions that run alongside international collective action,” says the International Institute for Environment and Development.