In this column, Alejandro Encinas, Senator in the Mexican Congress and International Vice President for the Americas of the Global Legislators Organisation (GLOBE), looks at the progress on climate change now being made worldwide.

Jun 2 2014 (IPS) - It is now two years since Mexico passed the General Law on Climate Change, a landmark piece of national environmental legislation.

This was a truly significant move and came at a time when the country had also just approved a far-reaching REDD+ law that has set the benchmark for international best practice on tackling deforestation and forest degradation. 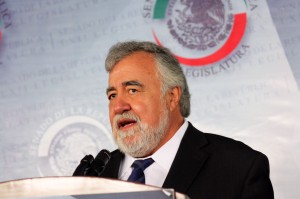 Passage of Mexico’s far-reaching climate law (which was supported, significantly, on a cross-party basis) highlights the progress on climate change now being made globally. Numerous national economies have passed landmark climate and energy-related legislation over the last few years.

These countries are advancing laws at a pace that contrasts sharply with the U.N.-brokered climate change talks that formally convene again in Peru in November.

This trend comes at a time of pivotal change in international relations with a period of economic downturn in recent years in the West being counterpoised with the increasingly rapid shift of power to some emerging economies.

Mirroring this is a fundamental repositioning of the centre of gravity of the global climate change debate towards domestic climate change legislation. This is nothing less than game changing.

“Until now, it [the political debate on climate change] has been largely framed by the narrative of sharing a global burden – with governments, naturally, trying to minimise their share” – Alejandro Encinas

In the last two years, there has been substantive legislative progress right across the developing world.

In the Americas, for instance, Bolivia passed its Framework Law on Mother Earth and Integral Development to Live Well; El Salvador adopted its National Climate Change Strategy; In Ecuador, Decree 1815 established the Intersectoral National Strategy for Climate Change; and in Costa Rica a draft General Law on Climate Change was introduced, and subsequently approved this year.

As in Mexico, adoption of such initiatives is – with a few notable exceptions­ – largely cross-party.

One key reason for this encouraging move towards political consensus is that many legislators increasingly recognise the positive co-benefits of climate change legislation. These range from greater resource efficiency and increased energy security to the reduction of air pollution.

All this, in turn, mirrors a crucial shift in the political debate on climate change. Until now, it has been largely framed by the narrative of sharing a global burden – with governments, naturally, trying to minimise their share.

Now, legislators increasingly view the issue as one of national self-interest, with each nation trying to maximise the benefits of climate change legislation.

Indeed, those countries with strong national legislation are in a better position to promote inward investment on low-carbon technologies because there is greater business certainty rather than high regulatory risk.

Encouraging as this shift is, it is as yet insufficient to avoid dangerous climate change of greater than 2 degrees Celsius.

Nonetheless, the national legal and policy frameworks to measure, report, verify and manage carbon that are now being created have the potential of significant tightening.

This will be the more likely as governments experience the benefits of lower energy use, reduced costs, improved competitiveness and greater energy security.

As this happens, the goal must be to translate such progress into a comprehensive, global deal in 2015 in Paris. And, this will be a key focus of the June 6-8 World Summit of Legislators that the Global Legislators Organisation (GLOBE)is hosting in Mexico City.

Such a deal will be made more likely when even more countries are committed to taking action on climate change because it is to their advantage rather than out of perceived altruism. In other words, such a deal will reflect domestic political conditions, not define them.

The U.N. negotiations should be used as the forum for countries to invest more in climate diplomacy and practical international cooperation.

This will help to expedite the creation of conditions within nations, both developed and developing, as well as its provincial regions, municipalities, specific cities and its metropolitan areas, that will enable them to agree a comprehensive global treaty in 2015.

It is ironic that countries that have found it hard to agree to international action are now outdoing their commitments in domestic legislation.

Having taken those steps at home they will find it much easier to commit to a global agreement which confirms the decisions they have already taken of their sovereign free will. (END/IPS COLUMNIST SERVICE)