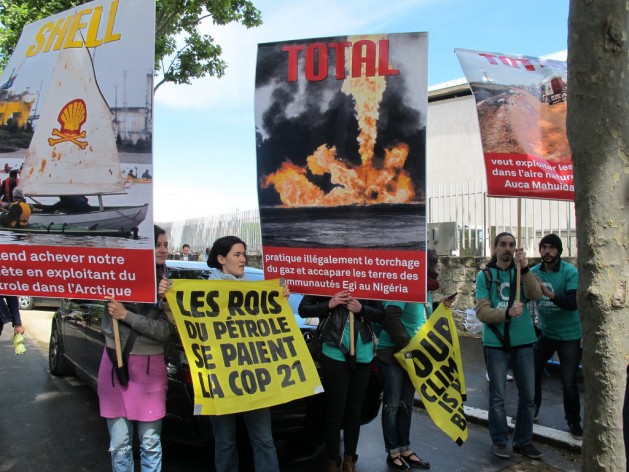 Demonstrators protesting at the Business & Climate Summit in Paris, May 20. Credit: A.D. McKenzie/IPS

That was the view of Eldar Saetre, CEO of Norwegian multinational Statoil, as international industry leaders met in Paris for a two-day Business & Climate Summit, six months ahead of the next United Nations Climate Change Conference (COP 21 ) that will also be held in the French capital.

Subtitled “Working together to build a better economy”, the May 20-21 summit brought together some 2,000 representatives of some of the world’s largest retail and energy concerns, including  companies that NGOs have criticized as being among the worst environmental offenders.

Throughout the conference, participants stressed that businesses will have to change, not only to protect the environment, but for their own survival. “Taking climate action simply makes good business sense. However, business solutions on climate are not being scaled up fast enough,” declared the summit organizers.

They pledged to lead the “global transition to a low-carbon, climate resilient economy.”

Saetre, for example, said his company wanted to achieve “low-carbon oil and gas production” and that it had embarked on renewables in the form of offshore wind energy. But he said that fossil fuels would still be needed in the future, alongside the various forms of renewable energy.

Acknowledging the widespread scepticism about multinational companies’ commitment, business leaders said that they could not “go it alone”, and called for support from governments as well as consumers.

Mike Barry, Director of Sustainable Business at British retailer Marks & Spencer, told IPS in an interview that global commitment was important in the drive to transform industry to have more environmentally friendly practices.

“Collective action can bring about real change,” he said. “We’re here today because we believe that climate change is happening and it’s going to have a significant impact on our business in the future and our success.

“Our customers would expect us to take the lead on this, and we want governments to take this seriously as well in the run-up to COP 21 [the 21st session of the Conference of the Parties to the United Nations Framework Convention on Climate Change to be held in Paris from Nov. 30 to Dec. 11].”

He said that Marks & Spencer and other companies in a network called the Consumer Goods Forum wanted to “stand shoulder to shoulder with government to say ‘this matters and we’re here to help’.”

But government consensus on how to address climate change has proved difficult, and even French President Francois Hollande, who opened the summit, conceded that it would require a miracle for a real agreement to be reached at COP 21.

“We must have a consensus. It’s already not easy in our own countries, so with 196 countries, a miracle is needed,” he said at the Business & Climate Summit, expressing the conviction, however, that agreement will be reached through negotiation and “responsibility”.

Hollande and other officials said the involvement of businesses was essential, and France, with its huge oil and electricity companies, evidently has a big role to play.

However, demonstrators outside the summit, held at the headquarters of the United Nations Educational, Scientific and Cultural Organisation (UNESCO), slammed big business.

“These multinationals (and the banks that finance their activities) are in fact directly at the origin of climate change,” read a statement from organisations including Les Amis de la Terre (Friends of the Earth, France) and the civil disobedience group J.E.D.I. for Climate.

Saying that it was ironic to have fossil-fuel companies represented at the summit, the groups asked: “Can one imagine for a second that the tobacco industry would be associated with policies to combat smoking aimed at ending the production of cigarettes? No, that would be the best way to ensure that the world continued to chain-smoke.”

The protesters added that if Hollande and his ministers wanted to show a real commitment to the environment, they should make it clear that “the climate is not a business”.

“The fight against climate change is not the business of fossil-fuel multinationals: they belong to our past,” the groups said in a joint release, handed out on the street.

At the summit, Christiana Figueres, Executive Secretary of the U.N. Framework Convention on Climate Change (UNFCCC), said that businesses should not be “demonised” and she called for collaboration rather than confrontation.

“We all start with a carbon footprint,” she said. “It is not a question of demonising anyone but realizing that we’re all here … This is not about confrontation. This is about collaboration. If you’re thinking about confrontation, forget it. Because we’re not going to get there.”

The summit – co-hosted by Entreprises Pour l’Environnement, an association of some 40 French and large international companies, and UN Global Compact France, a policy initiative for businesses – also addressed the vulnerability of island states in the face of climate change.

Tony de Brum, the Marshall Islands’ Minister of Foreign Affairs, said that island states in the Pacific and elsewhere had an interest in keeping pressure on carbon emitters because their populations’ survival was at stake.

Angel Gurría, Secretary General of the Paris-based Organisation for Economic Cooperation and Development (OECD), also highlighted the threat to vulnerable countries, saying that for them, climate change is not about protecting the environment for future generations, but “it’s about how long the water will take to overcome the land.”

Gurría said that greater reductions in carbon emissions were required than has so far been proposed by states, and he stressed that countries over time needed to “develop a pathway to net zero emissions globally” by the second half of the century.

“Governments at COP 21 need to send a clear directional signal that will drive action for decades to come,” he said. “We are on a collision course with nature, and unless we seize this opportunity, we face an increasing risk of severe, pervasive and irreversible climate impact.”