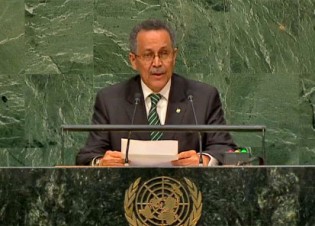 By Ramesh Jaura
The Sustainable Development Goals (SDGs), adopted at a summit meeting of world leaders at the U.N. headquarters in New York on Sep. 25, reflect the five strategic domains the ACP Group is gearing to focus on, as it repositions itself as a more effective organisation in the global arena, says the 79-nation bloc’s head Dr Patrick Gomes.

By Ramesh Jaura
UNFPA's Liberia representative Remi Sogunro talks to IPS News Agency, explaining the importance of Disaster Risk Reduction strategies to address epidemics such as Ebola and keep women's concerns on top. Sogunro was taking part in the Third World Conference on Disaster Risk Reduction in Sendai, Japan, from 14 to 18 March 2015.

From Delhi Through New York to Paris

By Ramesh Jaura
Norway's foreign affairs minister Jonas Gahr Støre has called for giving new priority to nuclear disarmament that has been assigned to oblivion since the fall of the Berlin Wall in 1989.
ADVERTISEMENT ADVERTISEMENT