Dr Patrick Ignatius Gomes of Guyana was elected the Secretary-General of the African, Caribbean and Pacific Group of States (ACP) at the 100th Session of the Group’s Council of Ministers, held at ACP Headquarters in Brussels on Dec.10, 2014. 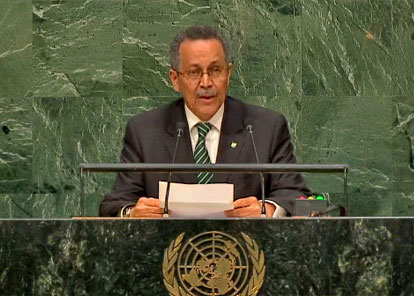 BRUSSELS, Oct 2 2015 (IPS) - The Sustainable Development Goals (SDGs), adopted at a summit meeting of world leaders at the U.N. headquarters in New York on Sep. 25, reflect the five strategic domains the ACP Group is gearing to focus on, as it repositions itself as a more effective organisation in the global arena, says the 79-nation bloc’s head Dr Patrick Gomes.

These domains include: rule of law and good governance; global justice and human security; intra-ACP trade, industrialization and regional integration; building sustainable, resilient and creative economies; as well as financing for development, he said in an email interview with IPS, adding that South-South and Triangular Cooperation informs the Group’s approach to all these domains.

Following is the full text of the interview:

IPS: The ACP Group is composed of 48 countries from Sub-Saharan Africa, 16 from the Caribbean and 15 from the Pacific. How far has it been possible for the ACP Group to evolve a joint strategy?

Dr Gomes: From the outset, the Committee of African, Caribbean and Pacific Ambassadors in Brussels recognised the importance of the post-2015 development agenda as a platform for global action to address the enormous needs of developing countries.

In 2014 the ACP Group set up an ad-hoc Ambassadorial Working Group to focus solely on crafting a joint position on the matter, highlighting key areas which are important to our Member States – climate change, financing for development, technology transfer, for example. At the heart of it all, is the desire to create conditions for our countries to succeed in development and industrialise in a sustainable manner, in order to raise the standards of living of our peoples.

This work fed into the joint declaration with the European Union on the post-2015 agenda, which was adopted by the ACP-EU Joint Council of Ministers in June 2014. That was a true milestone and it highlighted very clearly our joint interests while providing a guide for our future cooperation.

The ACP Group of States also more recently agreed on a position on the U.N.’s international conference on Financing for Development in July, and we are working on one for the Climate Change Conference COP21 in Paris in December. Through a number of different platforms, the ACP Group has been able to articulate a common position on issues of direct relevance in our countries’ prospects for sustainable development.

IPS: How far do the 17 SDGs address, in your view, the problems and aspirations of such a diverse group as the ACP?

Dr Gomes: The ACP Group is indeed a diverse group. All are developing, but each has specific conditions – amongst the membership, there are 40 Least Developed Countries, 37 Small Island Developing States (some are both), and 15 landlocked developing states. This is also captured at the regional level, whereby the ACP is organised in six regions (East, West, Southern and Central Africa, as well as the Caribbean and Pacific). The concept of national ownership and country-driven policies becomes very important.

Furthermore, the ACP Group has called for the establishment of a vulnerability index that takes into consideration the specific challenges that affect a country’s ability to develop. This doesn’t mean that member states cannot stand together on common issues, or support each other’s causes in the name of solidarity. We also follow a principle of subsidiarity and complementarity.

The SDGs reflect the five strategic domains the ACP Group is gearing to focus on, as it repositions itself as a more effective organisation in the global arena. These domains include rule of law and good governance; global justice and human security; intra-ACP trade, industrialization and regional integration; building sustainable, resilient and creative economies; as well as financing for development. South-South and Triangular Cooperation informs our approach to all these domains.

IPS: The Addis Ababa Financing for Development Conference in July, the Sustainable Development Summit and the Paris Climate Change Conference end of November through December have the semblance of a triumvirate determining the fate of the world in the coming years. At its core lies financing. How do you expect the financing problem to be solved? Does the European Development Fund provide adequate framework? Does it suffice?

Dr Gomes: We need to do development differently in the post-2015 era. It is clear that traditional Official Development Assistance (ODA) is, quantitatively, simply not enough to address the development demands of our countries. In fact, ODA now accounts for far less than Foreign Direct Investment, equity participation and remittances from diasporic communities investing in their countries of origin. In terms of long-term sustainable financing, we must look at mobilising domestic resources in our own developing countries. This means refining our tax laws, tackling tax evasion and curbing corruption in order to curtail the billions of dollars haemorrhaging through illicit financial flows.

To add to that, private funding to finance investments, improved public debt management, boosting trade – all these avenues need to be addressed in a comprehensive manner. The ACP Group also takes particular interest in South-South and Triangular Cooperation to complement the traditional North-South models of development finance.

Notwithstanding, ODA will remain an essential part of post-2015 development finance. Developed countries must still honour their previous pledges to allocate 0.7 percent of their Gross National Income (GNI) to development aid. So far, only a few European countries have achieved and surpassed this level of ODA – imagine if all the industrialised countries did so. Moreover, since developed nations recommitted to the 0.7 percent GNI goal for ODA in Addis Ababa in July, we have to look now at implementing this in the ACP-EU framework.

The European Development Fund for ACP countries is significant, but obviously not enough to achieve the SDGs. However, what is unique about the EDF is that it is part of a legally binding agreement between two sets of sovereign states. In the framework of our partnership, the EU provides a predictable source of finance and the ACP Group co-manages the funds. At the same time, issues of flexibility in the EDF regulations and better planning in ACP countries, mean that actual absorption rates by ACP countries can still be improved.

IPS: How far does the Sustainable Development Summit mark a watershed in global development cooperation? Do you expect it to turn out more of a success than its precursor, the MDG?

Dr Gomes: The attainment of SDG’s will be as successful as we make it. That is, these goals need have sufficient resources for work to be implemented and results delivered. Contrary to the momentum and hope generated by enormous pledges made by developed countries in international fora, the reality is that the state of financing for development is currently handicapped. In fact, amongst the challenges faced by the MDGs, were the inadequate implementation of commitments listed in Goal 8 (Global Partnership for Development), the global financial crisis of 2008, as well as issues of mutual accountability.

However, I remain positive. There is a growing awareness across the globe about development issues. There is also an interest in reviewing current systems to better deliver on development goals, as seen in the reforms currently being pursued at the UN and ACP Group. There is no doubt that the resources and means to achieve the Post-2015 Development Agenda do exist – it is a matter of collective will to wield them in the right direction. (END)