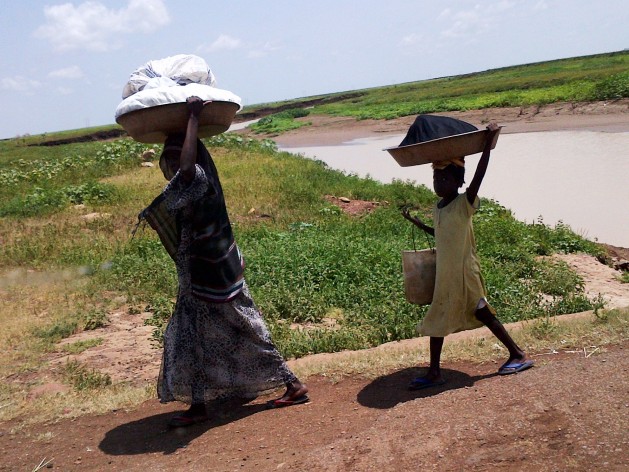 The European Commission is calling for SDGs to address poverty eradication and sustainable development together in three dimensions – economic, social and environmental. Photo credit: UNFPA Sudan

BRUSSELS, May 5 2015 (IPS) - In the run-up to the international Conference on Financing for Development from Jul. 13 to 16 in Addis Ababa, Ethiopia, the European Union has called for a “true paradigm shift” in global development cooperation.

The Addis Ababa conference will be followed by the U.N. post-2015 Summit in New York and the Climate Change conference in Paris in December. “These meetings will define our future and will set the level of ambition of the international community for the years and decades to come,” according to European Union Commissioner for International Cooperation and Development Neven Mimica.

The European Commission, which represents the interests of the 28-nation European Union, believes that the sustainable development goals (SDGs) to be agreed in New York in September should not only cover “traditional” development challenges such as poverty, health and education, but go much further and address poverty eradication and sustainable development together in three dimensions – economic, social and environmental.

The Commission is pleading for “moving towards a universal agenda”. This means that the goals and targets to be agreed in New York will apply to all countries, challenging them to achieve progress domestically, while contributing to the global effort. “Such a far-reaching agenda can only be delivered through a true global partnership,” said Mimica.

The E.U. Development Commissioner is backed by an eminent group of experts from Finland. France, Germany and Luxembourg, who have authored the fifth edition of the European Report on Development (ERD), which focuses on ‘Combining Finance and Policies to Implement a Transformative post-2015 Development Agenda’.

Mimica wants the agenda to serve to mobilise action by all countries and stakeholders at all levels: governments, private sector and civil society, all of which would need to play their part.

The key message of the ERD report, launched on May 4, is that policy and finance go together and that they are both crucial to implement a transformative post-2015 development agenda.

Based on existing evidence and specific country experiences, the report shows that finance alone is not enough – it seldom reaches the intended objectives, unless it is accompanied by complementary policies, the right combination of financing and enabling policies, says the report.

According to Mimica, “the findings and analysis contained in the report provide a most valuable research-based contribution to the debate, particularly in view of the Addis Conference on Financing for Development – but also beyond”.

“In this crucial year for international development cooperation, the 2015 European Report on Development can serve as a key point of reference, not just for the European Union, but for the international community at large,” Mimica said at the launching of the report.

The findings of the report are in line with three major guidelines which would drive the E.U. Commission’s action to implement the new development agenda:

In many ways, the report complements and supports the work of the Commission in advocating a comprehensive approach to the means of implementation for the post-2015 development agenda. At the same time, it challenges the Commission to keep pushing our thinking forward, said Mimica.

The significance of the report is underlined by the fact that the European Union as a whole has consistently remained the biggest global aid donor, even in times of significant budgetary constraints.

According to latest figures, the European Union’s collective official development assistance (ODA) (by E.U. institutions and member states) has increased to Euro 58.2 billion (up by 2.4 percent from 2013) – growing for the second year in a row, and reaching its highest nominal level to date. Collective European Union ODA represented 0.42 percent of E.U. gross national income (GNI) in 2014.

A 0.7 percent ODA/GNI target was formally recognised in October 1970  when the U.N. General  Assembly adopted a resolution including the goal that “each economically advanced country will progressively increase its official  development  assistance  to  the  developing  countries  and  will  exert  its  best  efforts  to  reach  a minimum net amount of 0.7 percent of its gross national product at market prices by the middle of the decade.”

To date, the target has not been achieved but it has been repeatedly re-endorsed at the highest level at international aid and development conferences.

“We are committed to playing our full part in all aspects of the post-2015 agenda, including means of implementation,” Mimica stressed.

He added: “In our February Communication [on a Global Partnership for Poverty Eradication and Sustainable Development after 2015], the Commission was very clear. We proposed to the Member States a collective E.U. re-commitment to the 0.7 ODA/GNI target – and we hope indeed that there will be agreement amongst Member States on this ahead of Addis.”

Official development assistance will certainly remain important in a post-2015 context – in particular for the least developed countries (LDCs), according to Mimica.

“At the same time, we expect other partners – including other developed economies and emerging actors – to also contribute their fair share. The efforts of the European Union alone will not be enough.”

Aware that this is a rather controversial issue, he added: “To be able to speak of an ambitious outcome in Addis and New York, we will all need to raise our level of ambition. The EU is ready to engage with all partners to achieve this. We have been active and constructive in the negotiations so far, and we will continue to do so, taking a responsible, bridge-building approach.”