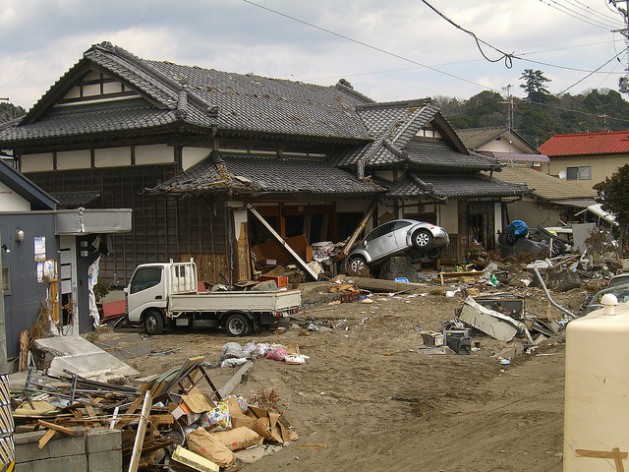 SENDAI, Japan, Mar 19 2015 (IPS) - The United Nations Development Programme (UNDP) has announced a new 10-year global plan to support country efforts to reduce the risk of disasters that kill people and destroy livelihoods. The plan was unveiled at the Third World Conference on Disaster Risk Reduction which ended on Mar. 18.

“Called ‘5-10-50’, the programme will support countries and communities to deliver better risk-informed development, and targets 50 countries over 10 years, with a focus on five critical areas: risk awareness and early warning; risk-governance and mainstreaming; preparedness; resilient recovery; and local/urban risk reduction,” UNDP Administrator Helen Clark said at a special event on Mar. 17 in Sendai, in the centre of Japan’s Tohoku region, which bore the brunt of the 2011 earthquake and tsunami that led to the Fukushima nuclear power plant disaster.

"It makes sense, doesn’t it? If you can actually invest in DRR, you don’t actually have to spend so much money after the crisis to feed the population." -- Izumi Nakamitsu

The report is a review of UNDP support in 125 disaster-prone countries since 2005, and draws on detailed findings from a selection of 17 countries. The findings from the report are to be used in the development of the new programme.

Following are excerpts of an IPS interview in which the UNDP Assistant Administrator Izumi Nakamitsu, who heads the agency’s Crisis Response Unit, explains what this Unit in particular and the agency in general are doing to reduce disaster risk (Interview transcript by Josh Butler at IPS U.N. Bureau in New York):

IPS: What was the idea behind setting up the Crisis Response Unit, and what does it do?

Izumi Nakamitsu (IN): UNDP is obviously a development cooperation organisation. But if you look at the world, there are so many crises. We have to make sure we become, or are, a development cooperation organisation that can also respond to crises properly and fast. If you can respond quickly to crises, you can from the start put perspectives of early recovery and also resilience. We can actually become much more strategic in the way the international community can actually respond to crises.

You hear this terminology of ‘fit for purpose.’ U.N. organisations need to change with the changing environment and context. That was the reasoning behind this rather dramatic restructuring of UNDP (in October 2014). As one of the outcomes, it’s not the only one, is a new entity called the crisis response unit.

I should also emphasise it’s not just a natural disaster context. In fact, if you look at the number of victims of humanitarian crises, 70-80 percent are in a conflict setting. It’s much more complicated to respond to that sort of crisis.

IPS: So disaster risk reduction is one complement of your activities?

IN: Risk reduction perspective has to be integrated into everything we do. The whole development actions will have to be risk-informed. All parts of UNDP are integrating perspectives.

It’s not just my little unit that coordinates and manages a crisis response, but there’s a large team that is specifically looking at how to mainstream DRR (disaster risk reduction) perspectives into everything UNDP does. It’s not just the crisis context. It has to be part of normal development work.

It makes sense, doesn’t it? If you can actually invest in DRR, you don’t actually have to spend so much money after the crisis to feed the population. We think it makes sense to integrate and mainstream these DRR perspectives throughout the development process.

IPS: How does the cooperation function in this case?

IN: Obviously we have to work together. A lot of the risk reduction part is to create a national sort of legal framework on the ground in different countries. We still have very good disaster management law, for example. We have been working quite a lot; in 70-80 percent of our programme countries, UNDP has been part of preparing that legislative framework to properly invest in DRR.

But that’s only the beginning of the work. We have to then create the actual capacities at the country level, so that thIs legislation will actually have an impact in terms of DRR.

IN: I wouldn’t say it’s difficult. It takes time. It’s about capacity building. For that to happen, we need to have good partners on the ground that are engaged with those stakeholders.

I was meeting with the secretary general of the federation of Red Cross societies, they have huge strength, because they have national chapters, national committees, who will be implementing those things in terms of capacity building. We have been partnering with them also in terms of preparing legislation as well.

The next step is to create capacities on the ground. We’re doing a lot of that. We think it makes sense to invest in those types of activities. We can’t prevent disasters. That is not possible. But if we can minimise the risk, we can manage the impact, then probably much smaller humanitarian interventions would be required. The whole international support will probably become much more sustainable.

IPS: Disaster prone countries lack funds, they also lack technologies. These will have to come from rich and industrialised countries. Isn’t that a problem?

IN: Of course . . . Japan just pledged 4 billion USD during the conference (as a gesture of goodwill). But it’s not just about the amount of money . . .There will have to be an understanding on the part of all governments that they have to invest in building DRR frameworks. They have to invest in building resilience and ensuring that resilience. It’s not just the amount of money but how you spend it.

IN: 2015 is a critical year: especially on the eve of (the finance for development meeting in) Addis Ababa, many countries are looking at what it is that they will have to agree. Sendai is the first one.

IPS: What would you suggest developing countries should expect from Addis?

IN: Let’s hope these intergovernmental processes will produce a strong enough policy framework that will actually fully recognise that these are in fact DRR, development concerns, and will be treated as such. Also that the countries will understand, you need to actually make investments in resilience and risk reduction.

We have invested 2 billion USD in the last 10 years in this area, DRR. In terms of implementation capacity, we are the one who will have to actually take those policy frameworks, look at them, and reflect them into our country programmes. Our work will probably be much more intense when these frameworks are ready.

We will have to take them and operationalise them. Those are the hopes. These are all intergovernmental processes. We’re here to support the governments and inform, in our view, what works and what doesn’t work that well. And feeding those perspectives into government delegations in the form of advice.

IPS: We are entering the minefield, where it’s a question of: what does international cooperation achieve?

IN: I think national governments also have a huge responsibility, but that’s why we work with them. We are the largest partner of those governments, especially in DRR areas. I talked about disaster management laws in different countries.

That’s a prime example of governments taking their responsibilities and then creating the capacities to make sure these legislative frameworks will actually have an impact and work with them also. (National) Governments’ responsibilities and our support, they are probably both sides of the same coin.