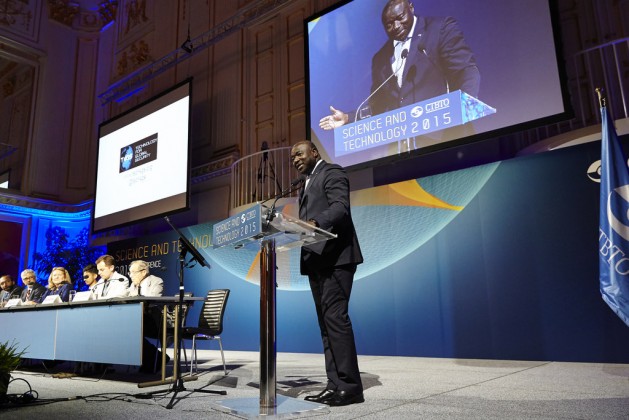 VIENNA, Jun 30 2015 (IPS) - An international conference has highlighted advances made in detecting nuclear explosions,tracking storms or clouds of volcanic ash, locating epicentres of earthquakes, monitoring the drift of huge icebergs, observing the movements of marine mammals, and detecting plane crashes.

The five-day ‘Science and Technology 2015 Conference’ (SnT2015), which ended Jun. 26, was the fifth in a series of multi-disciplinary conferences organised by the Comprehensive Nuclear-Test-Ban Treaty Organization (CTBTO), which has been based in the Austrian capital since 1997.

The conference was attended by more than 1100 scientists and other experts, policy makers and representatives of national agencies, independent academic research institutions and civil society organisations from around the world.

“With a strong verification regime and its cutting edge technology, there is no excuse for further delaying the [Comprehensive Nuclear-Test-Ban Treaty] CTBT’s entry into force” – UN Secretary-General Ban Ki-moon

SnT2015 drew attention to an important finding of CTBTO sensors: the meteor that exploded over Chelyabinsk, Russia, in 2013 was the largest to hit Earth in at least a century.

Participants also heard that the Air Algérie flight between Burkina Faso and Algeria which crashed in Mali in July 2014 was detected by the CTBTO’s monitoring station in Cote d’Ivoire, 960 kilometres from the impact of the aircraft.

The importance of SnT2015 lies in the fact that CTBTO is tasked with campaigning for the Comprehensive Nuclear-Test-Ban Treaty (CTBT), which outlaws nuclear explosions by everyone, everywhere: on the Earth’s surface, in the atmosphere, underwater and underground. It also aims to develop reliable tools to make sure that no nuclear explosion goes undetected.

These include seismic, hydro-acoustic, infrasound (frequencies too low to be heard by the human ear), and radionuclide sensors. Scientists and other experts demonstrated and explained in presentations and posters how the four state-of-the-art technologies work in practice.

170 seismic stations monitor shockwaves in the Earth, the vast majority of which are caused by earthquakes. But man-made explosions such as mine explosions or the announced North Korean nuclear tests in 2006, 2009 and 2013 have also been detected.

CTBTO’s 80 radionuclide stations measure the atmosphere for radioactive particles; 40 of them also pick up noble gas, the “smoking gun” from an underground nuclear test. Only these measurements can give a clear indication as to whether an explosion detected by the other methods was actually nuclear or not. Sixteen laboratories support radionuclide stations.

When complete, CTBTO’s International Monitoring System (IMS) will consist of 337 facilities spanning the globe to monitor the planet for signs of nuclear explosions. Nearly 90 percent of the facilities are already up and running.

An important theme of the conference was performance optimisation which, according to W. Randy Bell, Director of CTBTO’s International Data Centre (IDC), “will have growing relevance as we sustain and recapitalise the IMS and IDC in the year ahead.”

In the past 20 years, the international community has invested more than one billion dollars in the global monitoring system whose data can be used by CTBTO member states – and not only for test ban verification purposes. All stations are connected through satellite links to the IDC in Vienna.

“Our stations do not necessarily have to be in the same country as the event, but in fact can detect events from far outside from where they are located. For example, the last DPRK (North Korean) nuclear test was picked up as far as Peru,” CTBTO’s Public Information Officer Thomas Mützelburg told IPS.

“Our 183 member states have access to both the raw data and the analysis results. Through their national data centres, they study both and arrive at their own conclusion as to the possible nature of events detected,” he said. Scientists from Papua New Guinea and Argentina said they found the data “extremely useful”.

Stressing the importance of data sharing, CTBTO Executive Secretary, Lassina Zerbo, said in an interview with Nature: “If you make your data available, you connect with the outside scientific community and you keep abreast of developments in science and technology. Not only does it make the CTBTO more visible, it also pushes us to think outside the box. If you see that data can serve another purpose, that helps you to step back a little bit, look at the broader picture and see how you can improve your detection.” 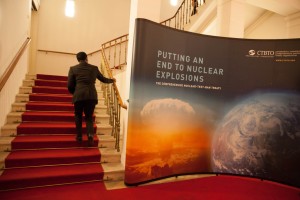 In opening remarks to the conference, Zerbo said: “You will have heard me say again and again that I am passionate about this organisation. Today I am not only passionate but very happy to see all of you who share this passion: a passion for science in the service of peace. It gives me hope for the future of our children that the best and brightest scientists of our time congregate to perfect the detection of the bomb instead of working to perfect the bomb itself.”

United Nations Secretary-General Ban Ki-moon set the tone in a message to the conference when he said: “With a strong verification regime and its cutting edge technology, there is no excuse for further delaying the CTBT’s entry into force.”

South African Minister of Science and Technology, Naledi Pandor, pointed out that her country “is a committed and consistent supporter” of CTBTO. She added: “South Africa has been at the forefront of nuclear non-proliferation in Africa for over twenty years. We gave up our nuclear arsenal and signed the Pelindaba Treaty in 1996, which establishes Africa as a nuclear weapons-free zone, a zone that only came into force in July 2009.

Beside the presentations by scientists, discussion panels addressed topics of current special interest in the CTBT monitoring community. One alluded to the role of science in on-site inspections (OSIs), which are provided for under the Treaty after it enters into force.

This discussion benefited from the experience of the 2014 Integrated Field Exercise (IFE14) in Jordan. “IFE14 was the largest and most comprehensive such exercise so far conducted in the build-up of CTBTO’s OSI capabilities,” said IDC director Bell.

Participants also had an opportunity to listen to a discussion on the opportunities that new and emerging technologies can play in overcoming the challenges of nuclear security. Members of the Technology for Global Security (Tech4GS) group joined former U.S. Secretary of Defense William Perry in a panel discussion on ‘Citizen Networks: the Promise of Technological Innovation’.

“We are verging on another nuclear arms race,” said Perry. “I do not think that it is irreversible. This is the time to stop and reflect, debate the issue and see if there’s some third choice, some alternative, between doing nothing and having a new arms race.”

A feature of the conference was the CTBT Academic Forum focused on ‘Strengthening the CTBT through Academic Engagement’, at which Bob Frye, prestigious Emmy award-winning producer and director of documentaries and network news programme, pleaded for the need to inspire “the next generation of critical thinkers” to help usher in a world free of nuclear tests and atomic weapons of mass destruction.

The forum also provided an overview of impressive CTBT online educational resources and experiences with teaching the CTBT from the perspective of teachers and professors in Austria, Canada, China, Costa Rica, Pakistan and Russia.

With a view to bridging science and policy, the forum discussed ‘technical education for policymakers and policy education for scientists’ with the participation of eminent experts, including Rebecca Johnson, executive director of the Acronym Institute for Disarmament Diplomacy; Nikolai Sokov of the James Martin Center for Non-proliferation Studies; Ference Dalnoki-Veress of the Middlebury Institute for International Studies; Edward Ifft of the Center for Security Studies, Georgetown; and Matt Yedlin of the Faculty of Science at the University of British Columbia.

There was general agreement on the need to integrate technical issues of CTBT into training for diplomats and other policymakers, and increasing awareness of CTBT and broader nuclear non-proliferation and disarmament policy issues within the scientific community.

Yet another panel – comprising Jean du Preez, chief of CTBTO’s external relations, protocol and international cooperation, Piece Corden of the American Association for the Advancement of Science, Thomas Blake of the Dublin Institute of Advanced Studies, and Jenifer Mackby of the Federation of American Scientists – looked ahead with a view to forging new and better links with and beyond academia, effectively engaging with the civil society, the youth and the media.

“Progress comes in increments,” said one panellist, “but not by itself.”

[With inputs from Valentina Gasbarri]