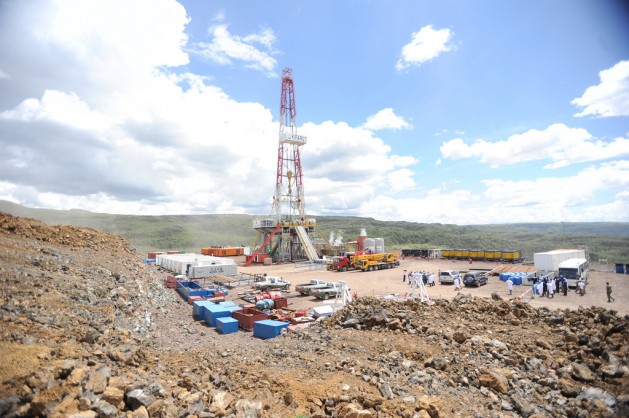 A geothermal drilling rig at the Menengai site in Kenya's Rift Valley to exploit energy which is more sustainable than that produced from fossil fuels. A Climate Change Bill now before the Kenyan parliament seeks to provide the legal and institutional framework for mitigation and adaption to the effects of climate change. Credit: Isaiah Esipisu/IPS

NAIROBI, Jul 27 2015 (IPS) - Alexander Muyekhi, a construction worker from Ebubayi village in the heart of Vihiga County in Western Kenya, and his school-going children can now enjoy a tiny solar kit supplied by the British-based Azuri Technologies to light their house and play their small FM radio.

This has saved the family from use of kerosene tin-lamps, which are dim and produce unfriendly smoke, but many other residents in the village – and elsewhere in the country – are not so lucky because they cannot afford the 1000 shillings (10 dollars) deposit for the kit, and 80 weekly instalments of 120 shillings (1.2 dollars).

“Such climate-friendly kits are very important, particularly for the rural poor,” said Philip Kilonzo, Technical Advisor for Natural Resources & Livelihoods at ActionAid International Kenya. “But for families who survive on less than a dollar per day, it becomes a tall order for them to pay the required deposit, as well as the weekly instalments.”

“Once it [Climate Change Bill] becomes law, we will deliberately use it as a legal instrument to reduce or exempt taxes on such climate-friendly gadgets and on projects that are geared towards low carbon growth” - Dr Wilbur Ottichilo, Kenyan MP

It was due to such bottlenecks that Dr Wilbur Ottichilo, a member of parliament for Emuhaya constituency in Western Kenya, and chair of the Parliamentary Network on Renewable Energy and Climate Change, moved a motion in parliament to enact a Climate Change Bill, which has already been discussed, and is now being subjected to public scrutiny before becoming law.

“Once it becomes law, we will deliberately use it as a legal instrument to reduce or exempt taxes on such climate-friendly gadgets and on projects that are geared towards low carbon growth,” said Ottichilo.

In collaboration with development partners, the country is already investing in increased geothermal electricity in the energy sector to counter this situation, switching movement of freight from road to rail in the transport sector, reforestation in the forestry sector, and agroforestry in the agricultural sector.

“With a legal framework in place, it will be possible to increase such projects that are geared towards mitigating and adapting to the impacts of climate change,” said Ottichilo.

The Climate Change Bill seeks to provide the legal and institutional framework for mitigation and adaption to the effects of climate change, to facilitate and enhance response to climate change and to provide guidance and measures for achieving low carbon climate-resilient development.

“We received the Bill from the National Assembly towards the end of March, we studied it for possible amendments, and we subjected it to public scrutiny as required by the constitution before it was read in the senate for the second time on Jul. 22, 2015,” Ekwee Ethuro, Speaker of the Senate, told IPS.

“After this, we are going to return it to the National Assembly so that it can be forwarded to the president for signing it into law.”

The same bill was first rejected by former President Mwai Kibaki on the grounds that there had been a lack of public involvement in its creation. “We are very careful this time not to repeat the same mistake,” said Ethuro.

Under the law, a National Climate Change Council is to be set up which, among others, will coordinate the formulation of national and county climate change action plans, strategies and policies, and make them available to the public.

“This law is a very important tool for civil society and all other players because it will give us an opportunity to manage and even fund-raise for climate change adaptation and mitigation projects,” said, John Kioli, chair of the Kenya Climate Change Working Group (KCCWG).

Evidence of climate change in Kenya is based on statistical analysis of trends in historical records of temperature, rainfall, sea level rise, mountain glacier coverage, and climate extremes.

Temperature and rainfall records from the Kenya Meteorological Department over the last 50 years provide clear evidence of climate change in Kenya, with temperatures generally showing increasing trends in many parts of the country starting from the early 1960s. This has also been confirmed by data in the State of the Environment reports published by the National Environment Management Authority (NEMA).

As a result, the country now experiences prolonged droughts, unreliable rainfall patterns, floods, landslides and many more effects of climate change, which experts say will worsen with time.

Furthermore, 83 percent of Kenya’s landmass is either arid or semi-arid, making the country even more vulnerable to climate change, whose impacts cut across diverse aspects of society, economy, health and the environment.

“We seek to embrace climate-friendly food production systems such as use of greenhouses, we need to minimise post-harvest losses and food wastages, and we need to adapt to new climate friendly technologies,” said Ottichilo. “All these will work very well for us once we have a supporting legal environment.”