Burkhard Gnärig, Executive Director of the International Civil Society Centre, has over 30 years’ experience working in international development, including serving as the CEO of Save the Children International, Greenpeace Germany, and terre des hommes Germany. 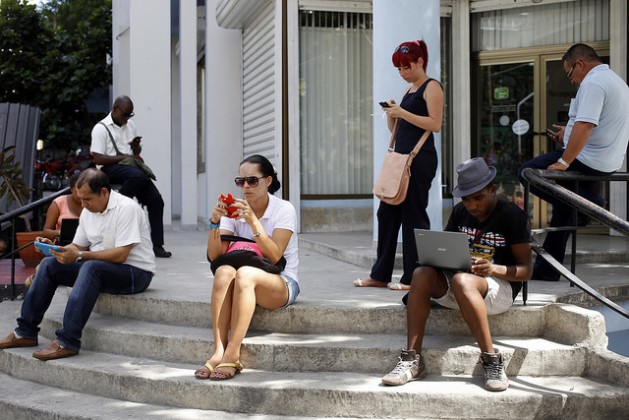 "Many governments are trying to bring their digitally empowered citizens back under control." Photo credit: Jorge Luis Baños/IPS

BERLIN, Aug 22 2016 (IPS) - The United Nations’ Universal Declaration of Human Rights of 1948 provides the foundation for citizens’ rights to participate in shaping their communities.

Sadly these and other human rights have never turned into reality for a majority of the world’s population. While we have seen a strengthening of pluralism and individual rights after the fall of the Berlin Wall, we observe a negative trend more recently: people’s space to actively participate in their communities is shrinking.

The – usually unrealistic – promises of protection come at the price of restrictions to people’s rights to express their opinion, organise themselves or engage in any other way which does not support the government’s policies.

Two major developments undermine our rights to participate in shaping the future of our communities, our countries and our planet.

On the one hand, many governments are trying to bring their digitally empowered citizens back under control.

Since the beginning of the new millennium, digital technology has empowered individuals to communicate and cooperate world-wide without the intermediation of governments and other state and non-state actors.

Together with their near monopoly in informing, framing and directing the discussions and actions of their citizens, governments have lost much of their control over the individual. At present we see a wide variety of government activities – from censoring the internet to jailing activists – aiming to bring their citizens back under control.

On the other hand, many citizens are willing to trade in some of their fundamental rights on their governments’ promises of protection against terrorists, migrants, or foreign competition.

At the same time we observe a dramatic increase in the number of citizens who are prepared to sacrifice some of their rights on the promise to exterminate terrorism, refuse refugees’ and migrants’ entry, or stop economic and cultural globalisation. A growing number of people world-wide follow ultra-nationalist and authoritarian leaders offering national protection against the aspiration of the global community. The – usually unrealistic – promises of protection come at the price of restrictions to people’s rights to express their opinion, organise themselves or engage in any other way which does not support the government’s policies.

In this situation a growing number of actors in civil society, business, governments, political parties, UN institutions, the media, funders, schools and universities are suffering from infringements on their work, and many are considering how to react. My organisation, the International Civil Society Centre, is working to deliver three specific contributions to the fight for civic space:

Firstly, we have been facilitating the development of a Civic Charter which – in a concise, easily understandable document – brings together all of the major provisions framing the space for civic participation. Thus we want to provide a common global basis for the fight for our rights.

Secondly, we are convening an International Civic Forum with key representatives from civil society, governments, the UN, business, the media, academia, funders, and other key influencers, to analyse the situation and create a basis for common activities.

And, thirdly, we will embark on an exploratory journey looking at new forms of civic participation and developing prototypes for effective future action.

As the initiators and owners of the Universal Declaration of Human Rights, the United Nations has a special role to play in the defence of civic space. We expect the new Secretary General to explicitly and frequently remind governments that they are supposed to serve, to report to – and be controlled by – their citizens and not the other way around. We expect all UN Agencies to engage more systematically and effectively in cooperation with civil society organisations fully using, and thus protecting, the space for people’s participation. We expect the UN to engage in a global campaign that promotes human rights world-wide and specifically citizens’ rights to participate – at local, national and global level – in shaping our common future.