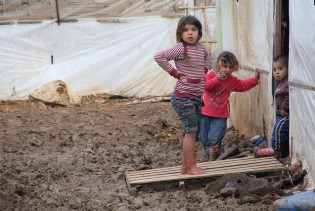 By Silvia Boarini
Despite formally adopting progressive laws, such as Law Number 4, and ratifying the UN Convention on the Rights of People with Disability, Palestinian authorities still struggle to get beyond rhetoric when it comes to supporting the 7 to 11 per cent of the population that is affected by disability.

By Silvia Boarini
Despite ostensibly freezing the Prawer Plan -- a proposed bill to 'regulate Bedouin settlement in the Negev’-- in 2013, Israel continues to push for forced closure of unrecognised Bedouin villages in this southern region. The village of Umm al-Heran, near the Bedouin township of Hura, is amongst those slated for demolition.

By Silvia Boarini
In the safety of his sister's bare flat in Beit Hanoun, Gaza, 42 year-old Iyad Yusef still shakes his head in disbelief when he recounts the journey that from war-torn Syria, brought him and his family to the relative safety of the blockaded strip.