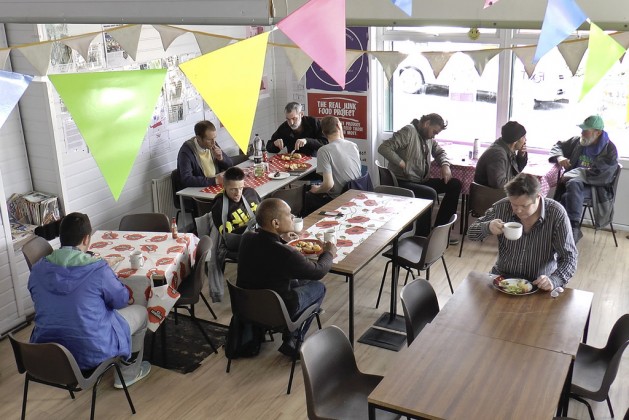 Customers enjoy a ‘Pay As You Feel Lunch’ at The Armley Junk-Tion, Armley, Leeds, where food destined to waste and intercepted by volunteers is cooked into perfectly edible and nutritious meals. Credit: Silvia Boarini/IPS

LEEDS, England, Aug 31 2015 (IPS) - A new grassroots initiative born in the northern England city of Leeds has set itself the ambitious goal of ending food waste, once and for all.

Founded in December 2013, ‘The Real Junk Food Project’ (TRJFP), is the brainchild of chef Adam Smith.

It consists of a network of ‘Pay As You Feel’ cafés where food destined to waste and intercepted by volunteers is cooked into perfectly edible and nutritious meals that people can enjoy and give back what they can and wish, be it money, time or surplus food.

TRJFP is run on a volunteer basis through customers’, crowdfunding and private donations and with only a handful of paid positions at living wage level.

Sitting at a table in the first café opened by TRJFP, The Armley Junk-Tion in the struggling suburb of Armley, Leeds, 29-year-old Smith is still infectiously enthusiastic about it all. 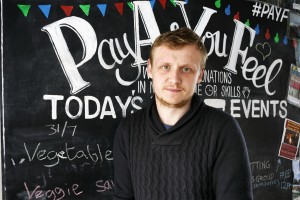 “It’s the right thing to do and it’s something that has a positive impact,” he told IPS. “We believe that we can empower people and communities and inspire change across the whole system through the organic growth of these cafés.”

In under two years, TRJFP has grown into a worldwide network of 110 cafés: 14 in Leeds, one of which in a primary school, 40 across the United Kingdom and the rest in countries as diverse as Germany, Australia, South Africa or France.

TRJFP volunteers are out every day and at all hours intercepting food from households, food businesses, allotments, food banks, wholesalers, supermarkets and supermarket bins.

“The [U.K.] government is spending million and millions of pounds on campaigns to stop people from wasting food but all we are doing is just feeding it to people. We say, ‘if you know it’s safe to eat, why don’t you eat it?’ That’s all it takes, it didn’t cost us any money“ – Adam Smith, founder of ‘The Real Junk Food Project’

TRJFP has also been able to secure surplus chicken from the Nando’s restaurant chain and part of the food ”waste” generated by local Morrisons supermarket branches.

“We ignore expiry dates or damage and use our own judgment on whether we think the food is fit or safe for human consumption,” said Smith.

The number of tonnes of food intercepted, though, pales in comparison with the amount of food that is still wasted each year. The Food and Agriculture Organization (FAO) estimates food wastage globally at one-third of all food produced – that is 1.3 billion tonnes each year. This means that one in four calories produced is never consumed. On the other hand, FAO also reports that 795 million people worldwide are chronically undernourished.

‘Food waste’ is often described as a “scandal” and yet top-down actions seeking to put an end to it still treat the above statistics as two separate problems requiring two separate solutions – recycle more in rich countries and produce more food in and for developing countries – that effectively leave a faulty system intact and the interests of a multi-billion dollar industry unchallenged.

According to Tristram Stuart, campaigner and author of ‘Waste – Uncovering the Global Food Scandal’, “all the world’s nearly one billion hungry people could be lifted out of malnourishment on less than a quarter of the food that is wasted in the United States, United Kingdom and Europe.”

But our short-sightedness and unwillingness to change our habits are laid bare in laws such as the one approved last May by the French parliament. In France, large supermarkets will be forbidden from throwing away unsold food and forced to give it to charity or farmers.

Although hailed as a breakthrough in the fight against food waste, critics such as food waste activists ‘Les Gars’pilleurs’ say that such laws only circle around the problem, offering a quick fix. For starters, supermarkets are hardly the only culprits. For example, as the U.K. charity Waste and Resources Action Programme (WRAP) reports, they produce less than two percent of U.K. food waste, while private households are responsible for roughly 47 percent of it and producers 27 percent.

“The government is spending million and millions of pounds on campaigns to stop people from wasting food but all we are doing is just feeding it to people,” Smith cut short. “We say, ‘if you know it’s safe to eat, why don’t you eat it?’ That’s all it takes, it didn’t cost us any money.“

As a grassroots and independent initiative, TRJFP does not categorise food waste as an environmental, economic or social malaise. It tackles it holistically and works to educate the public but also lobbies ministers and parliamentarians to develop relevant policies.

“We have been to Westminster (seat of the U.K. parliament) a few times already to talk about this problem. There are many interests at stake but we will keep working until there is no more waste,” Smith said, adding that he hopes to prepare a waste-food lunch for members of parliament.

In Armley, the café fills up for lunch. On the menu are delicacies such as meat stew, steak and lentil soup. The clientele represents a cross-section of society that normally travels on parallel paths. Hipsters, homeless, professionals or unemployed all eat the same food, sit at the same tables and enjoy the same service. No referrals needed, no stigma attached, as often happens with other such services.

Richard, a recovering alcoholic, has been having lunch at The Armley Junk-Tion for a few months. “The café has been a real focus point for the community to come and eat together irrespective of background,” he told IPS. “It doesn’t matter what you want to eat. There’s always something on the menu for everybody.”

For 36-year-old Paul, with a history of mental illness, TRJFP offers an important safety net not guaranteed by social services. “Where I stay, my cooking facilities are restricted to a microwave. Due to cut backs and lack of support services, the only help I get is coming to places like this,” he told IPS.

Nigel Stone, one of the café’s volunteer co-directors, had no doubt the idea would catch on. “It is such an unbelievably common sense solution and the best part of it is how it brings the community together, especially in times of need.”

Slowly but steadily, TRJFP is changing norms around food waste and hopes to make it socially unacceptable for anyone to waste food. First off, though, they are proving that we must stop calling it waste, it just isn’t, it’s perfectly good food that every day we decide to throw away.