CHIMALTENANGO, Guatemala, Jun 4 2012 (IPS) - “Midwives in Guatemala attend to women during pregnancy, the birth and the post-partum period. They give the women warmth and support, because they speak the same language and belong to the same culture,” said Silvia Xinico with the Network of Organisations of Indigenous Women for Reproductive Health.

Xinico, a member of the Cakchiquel indigenous community, told IPS that the midwives “are treated as part of the family; they give people advice about how to solve their difficulties.” They are also called on when there is a health problem in the community. 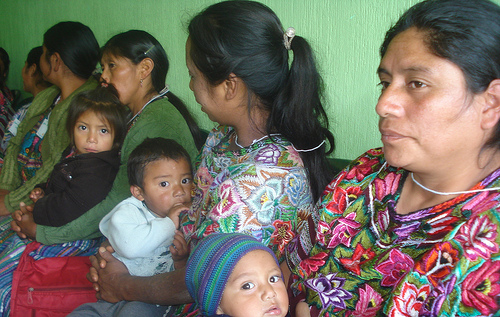 Most indigenous women in Guatemala use the services of midwives. Credit:Danilo Valladares/IPS

The important role played by local midwives is reflected in the official statistics, which show that nearly half of all births in this Central American country are attended by midwives.

The 2008-2009 National Maternal-Infant Health Survey reported that 48 percent of pregnancies in the country were attended in the homes of the expectant mother or the midwife. But in departments (provinces) where most of the population is indigenous, the proportion reached almost 80 percent.

The survey also indicated that 43 percent of births took place in public hospitals and clinics, and just under eight percent in private health facilities.

The Health Ministry reported that midwives attended 45.7 percent of the 115,997 births registered in the country from January to October 2011.

The National Survey on Living Conditions carried out last year reported that 54 percent of Guatemala’s 14 million people live in poverty and 13 percent in extreme poverty.

The worst poverty and lack of public services, healthcare and education are concentrated in indigenous provinces. (According to official statistics, 40 percent of Guatemala’s population of 14 million is indigenous, although native organisations put the proportion at over 60 percent.)

Despite the important role they play in providing healthcare, Guatemala’s traditional midwives are sometimes denigrated. “Because they are indigenous, they are discriminated against and treated with scorn by staff in the public health services” to which they turn when patients with complications must be transferred to the hospital, Xinico said.

“The doctors don’t let us go in the hospital, they only let the patient in, which makes us feel bad,” said Regina Patzán, a native midwife from San Juan Comalapa in the central department of Chimaltenango.

This happens even though many of the expectant mothers do not speak Spanish, only their native language, she told IPS.

Patzán, who has been a midwife for 16 years, says her skills are a gift from God.

“When I was just a little girl I wanted to know how babies came into the world. My great-grandmothers and my grandparents would get angry when I asked them,” she said, adding that she was even whipped a couple of times for asking about “adult things.”

But she was determined to know. “I wanted to receive the children when they were born,” she said. So she got involved in a non-governmental organisation, and was trained as a midwife, seeing her dream come true.

“When women come with complications, we immediately send them to the hospital. We are also visited by 14- or 15-year-old girls who come in with a stomach ache and we explain that it’s menstruation,” she said.

Her hunger for knowledge remains intact. “We would like to learn how to detect haemorrhaging when we are in the village and how we can help the women,” she said.

María Clara Mux, 55, another midwife from Chimaltenango, inherited her craft from her grandmother. “The first birth I attended was my daughter-in-law’s, because I had seen how my grandmother did it. Thank God everything went well. My grandson is now 13 years old,” she told IPS.

She strongly emphasises the need for family planning. “Now there are many planning methods to use. It’s not like before, when families had 16 kids. Things are difficult and we have to pay for school, clothing and food,” she said.

Mux is now receiving training at the local health centre and continues to help pregnant women and attend births, although she does so in precarious conditions.

“We need equipment – gloves, scissors and a syringe. The Health Ministry gave us some, but they eventually wear out. We also need a lantern, because some people don’t even have electricity and we can’t see a thing.”

The absence of health services in the most remote parts of the country means midwives play a key role in preventing maternal deaths.

Aracely Tórtola with the Asociación Pro Bienestar de la Familia de Guatemala – the Guatemalan association of family welfare, a local NGO – said the midwives “play a very important role in society, helping to curb maternal mortality, because many women are in areas where there are no hospitals.”

“These women also face economic and cultural hurdles to gaining access to hospitals,” the expert said.

Tórtola said midwives should receive training and education in the rights of women, family planning methods, prevention of sexually transmitted diseases, prevention of risks, and breastfeeding.

“If the midwife provides good advice and information, if she tells women that they have a right to family planning, if she takes them to the hospital when the pregnancy is at risk, she is helping bring down the maternal mortality rate,” she said.

But the ratio is three times higher among indigenous women, the Observatory on Sexual and Reproductive Health reports.

Leonor Calderón, the delegate of the United Nations Population Fund (UNFPA) in Guatemala, commented to IPS that women play a fundamental role in society because of their contribution to maternal health. She said the state should recognise their skills and knowledge.

Calderón described traditional midwives as “agents of development” because of the social role they play in attending births, reducing maternal mortality and encouraging family planning.