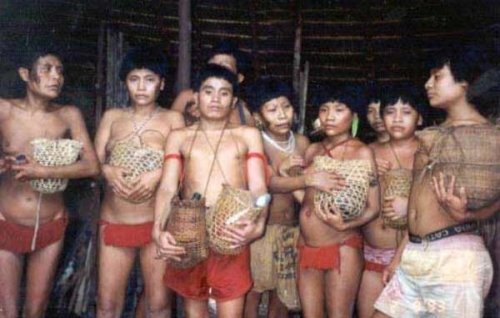 Survivors of the 1993 Haximú massacre hold urns containing the ashes of their relatives. Credit: Courtesy of C. Zacquini/Survival International

CARACAS, Sep 3 2012 (IPS) - Up to 80 Yanomami men, women and children in a remote community in the Amazon jungle in southern Venezuela were reportedly killed in early July by wildcat gold miners from Brazil, according to indigenous organisations.

“Although there are questions about the number of victims, the activity of the garimpeiros (illegal gold miners who cross the border from Brazil) in that area and their sometimes difficult relations with the Yanomami communities have been known about for years,” José Ángel Divassón, a Catholic bishop in Amazonas state, told IPS from the regional capital, Puerto Ayacucho.

That state, at the bottom tip of Venezuela, is an area of 175,750 square kilometres that is home to 15 different indigenous groups. A large part of the state is covered with virgin jungle bathed by the waters of the tributaries of the Orinoco and Amazon rivers.

An environmental protection law banned mining in the entire mineral-rich state in 1989.

But “the garimpeiros, pressured by the authorities in northern Brazil, cross into Venezuela and establish relations with the Yanomami, to get their support in exchange for some goods. But sometimes that cooperation breaks down,” said Divassón, of the Salesian order, which carries out missionary work throughout the state of Amazonas.

On Aug. 27, the Horonami Yanomami Organisation filed a request in the public prosecutor’s office in Puerto Ayacucho for an investigation of the massacre reported by three survivors from Irotatheri, the village where the killings apparently took place in early July.

The Horonami Organisation’s request was backed by four other communities in the area of the headwaters of the Ocamo river – a tributary of the Orinoco – and the Parima Sierra, which marks part of the border with Brazil.

The survivors “had gone out to hunt and heard the noise of a helicopter in which the garimpeiros arrived, and the sound of explosions and gunshot in the ‘shabono’ (round, straw-roofed communal hut), which they found burnt down. Eighty people lived there,” Horonami leader Luis Shatiwë told the prosecutors.

Members of the Hokomawe community, who later visited Irotatheri, also saw the burnt remains of the shabono, as well as charred human bodies and bones. The group informed Shatiwë, who reported it to members of army Brigade 52, which operates in the area, on Jul. 27, according to the Horonami Organisation.

Marcos de Oliveira at Brazil’s Socioenvironmental Institute told the Caracas daily El Nacional that an injured survivor from Irotatheri reached a shabono on the Brazilian side of the border, where he was given medical assistance and was taken in by relatives in another community.

Survival International, a global organisation that helps tribal peoples defend their lives and their rights and protect their lands, said in a statement updated on Sept. 3 that “Due to the community’s remote location, it took the Indians who discovered the bodies days to walk to the nearest settlement to report the tragedy.”

Thirteen native organisations from the region, representing different indigenous communities, expressed solidarity with the Horonami Organisation’s denunciation. They said in a statement that the Yanomami communities in the area of the headwaters of the Ocamo river “have been invaded and attacked by illegal miners from Brazil for more than four years.”

“Since 2009, we have been informing state bodies in Venezuela of the presence of garimpeiros in the Alto Ocamo, attacks on the Momoi and Hokomawe communities, physical violence, threats, the exploitation of women, and the contamination of water with mercury, which has left a number of Yanomami dead,” the document says.

But state bodies, according to the organisations, “have not taken effective measures to expel the garimpeiros and design a plan for surveillance and control over their regular incursions in the area.”

The indigenous groups demanded “the adoption of bilateral measures with Brazil” to address the threat “to life, integrity and health” of the Yanomami. They also noted that July’s killings occurred “nearly 20 years after the massacre of Haximú.”

In June and July 1993, garimpeiros killed 16 Yanomami in the border community of Haximú. Five of the 24 individuals implicated were convicted and sentenced to prison in Brazil. And after a 15-year legal process, the Venezuelan state agreed to the Inter-American Commission on Human Rights’ demand that it adopt measures of surveillance, control, protection and guarantees of healthcare provision in the Yanomami territories.

“It is infuriating that this happened in the midst of the revolutionary period of the construction of socialism (by the left-wing government of Hugo Chávez), after the rights of indigenous people were enshrined in the constitution for the first time in history,” Lusbi Portillo, the head of an environmental group that works with indigenous people, told IPS.

Survival International Director Stephen Corry said, “All Amazonian governments must stop the rampant illegal mining, logging and settlement in indigenous territories. It inevitably leads to massacres of Indian men, women and children. The Venezuelan authorities must now bring the killers to swift justice, and send a signal throughout the region that Indians can no longer be killed with impunity. The mining and logging must be stopped.”

The minister for indigenous peoples, Nicia Maldonado, a member of the Ye’kuana tribe from the Amazon rainforest, told state television on Saturday that a team of military officers, prosecutors and other officials flew by helicopter to the remote jungle area where the massacre was reported, and “found no evidence of any killings.”

Minister of the interior and justice Tarek El Aissami said seven of the nine Yanomami communities in that area had been contacted, and that no signs of violence were found.

The minister of defence, General Henry Rangel, said “the alleged massacre has not been confirmed, and this may have been the result of a confusion, after a first report of violence a few weeks ago, which was shown to be false.”

In its statement, Survival International said ”We do not believe the (government) investigating team has even reached the area where it happened. It is quite normal in these circumstances for there to be a long lapse before the facts can be sensibly established (if indeed they ever can).”

People familiar with the area, like the missionaries active around the headwaters of the Ocamo river, said it takes several days to walk to Irotatheri.

Groups of garimpeiros reportedly use helicopters to reach these remote jungle areas, and are mining under the protective canopy of trees, instead of clearing swathes of forest, to avoid being seen from the air.

That part of southern Venezuela and the border areas of the Brazilian states of Roraima and Amazonas are inhabited by some 20,000 Yanomami, one of the oldest native peoples in South America, hunters, fishers, and horticulturists who have thrived in the rainforest for up to 25,000 years.