ALTAMIRA, Brazil, Jun 29 2010 (IPS) - At dawn, the “captain” fired on the village leader and the shooting began. “The forest trembled,” says one survivor: the local indigenous people fled, leaving their dead behind. Only one young girl remained. But she sank her teeth into the chest of one of the assailants with such force that they slit her throat to pull her off him. 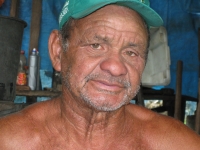 Five decades later, Benedito dos Santos remembers the killings in which he participated as a “seringueiro”, or rubber tapper, in Brazil’s Amazon jungle.

In the late 19th century, rubber tappers began encroaching on the forests of the Xingú River Basin in the northern Brazilian state of Pará, either clashing with local indigenous groups, or living and intermarrying with them.

“Bião,” as Santos is known, is now 67. He had 26 children with 14 women. Currently he works as a boatman in a family-run company that has eight boats and a dock in Altamira, the largest city on the banks of the Xingú, home to 100,000 people.

He has lived through the ups and downs of the river basin’s extractive economy since he arrived when he was nearly five, with his widowed mother and three younger siblings. They came from the Mojú River, 350 km to the east.

When asked about the transformations that will result from the Belo Monte hydroelectric plant, which will dam the Xingú River in two places, flooding islands, forests and farmland, Bião says he is “neutral.”

The decision belongs to “the powerful,” and the debate between the mega- project’s supporters and opponents doesn’t matter, he says.

He just hopes it will generate income for the local people who are unemployed, and says the role of the forest has changed, and is no longer what people rely on to survive.

“I was raised on tree milk,” he jokes, pointing out that he was very young when he learned to extract latex from the rubber tree (Hevea brasiliensis), known here as “seringueira”, in addition to helping his mother and stepfather with farming, and collecting Brazil nuts.

He became a seringueiro at 14, plunging into the jungles of the Middle Xingú with three different rubber-tapping groups. His girlfriend was already expecting his first child.

The attack on the village was in reprisal for the murders of a number of seringueiros committed by indigenous people to obtain firearms, said Bião. “In Isaac’s group alone they killed more than 40,” he said.

Killings happened on both sides. But the non-indigenous outsiders added a macabre twist: they stuffed rocks in the bodies of the victims so they would sink to the river’s depths and avoid detection by the government’s Indigenous Protection Service.

Bião grew increasingly fearful, worried also about internal conflicts. One afternoon, a shoot-out erupted amongst the seringueiros in the camp, and several were killed. He avoided the disputes and enjoyed the protection of his bosses because of his ability to bring in bush meat and fish.

The day of the attack in question, seringueiros surrounded the indigenous village after a nine-day hike. Ten of the 35 men deserted the group during the trek. The “captain” put Bião “behind an embaúba tree, so skinny that it wasn’t going to stop any bullets,” he recalls. Frightened, he spent the entire night digging a trench “using my fingernails like hoes.”

Many indigenous people were killed, but only two seringueiros were injured, and the village was burned down, Bião says.

After nine years in the rubber tree forest, he returned to the “good life” of Altamira, already a father of four. There was little future in the dangerous rubber tapping trade.

The Brazilian Amazon, where some made their fortunes in the rubber boom of the late 19th and early 20th centuries, lost its global market dominance in natural latex to Malaysia starting in 1920, where rubber tree plantations achieved higher yields.

Bião and his fellow rubber tappers benefited from strong post-World War II prices, but Brazil had already fallen to the status of secondary exporter, relying on subsidies and awaiting jumps in demand for natural latex, as occurred during WWII, when Japan blocked exports from Southeast Asia.

Hunting jaguars and other animals with prized pelts went from being occasional work to Bião’s main source of income. “That was when I earned the most money,” enough to buy two lots in the city, he says.

“One night I killed 30 jacaré caiman (a member of the crocodile family), but two friends and I couldn’t remove all their skins; it’s hard work,” he said.

Today there are few caimans left near Altamira because “people kill them for food,” but they do remain abundant in the Upper Xingú, according to Bião. Although a 1967 law was passed to ban the hunt, there is little enforcement in the rainforest.

He also participated in the haphazard construction of the Trans-Amazonian Highway, begun in 1970. He spent a year tearing down forests to open the way for the 3,000-km project, intended to unite the Brazilian Northeast and the Amazon. The road, left unpaved, has long been nearly impassable along the stretches that serve Altamira.

But the project attracted a new wave of migration to the Amazon region, fuelled by promises of jobs and the distribution of land to farm.

Aparecida Moraes is a child of that process. She was born in 1971, a year after her family migrated from the southern state of Paraná in search of land, and ultimately settled on the banks of the Xingú.

Now she is married to another migrant from Paraná and sells the bananas, papayas and grains they grow at the farmers market in downtown Altamira. The Belo Monte dam will not flood her land.

Sebastião de Castro Silva has no such luck. The 60-year-old father of eight grows cacao and grains on the 100 hectares he bought when he arrived in Altamira in 1977, coming from the central state of Goiás. “I’ll leave the Amazon if they build the dam,” he said, because it would flood 40 percent of his farm and he would be unable to keep his 32 family members together.

While the invasion of the Middle and Lower Xingú by colonists was occurring in the 1970s, Bião joined the “garimpo” boom, the informal mining of gold and precious stones. He went to Venezuela to look for diamonds, but was quickly arrested and deported with many other Brazilian “garimpeiros”.

He found gold in Ressaca, near Altamira, in a mine that some of his descendants continue to work today. He then tried several other mining sites and settled on one 1,000 km south of Altamira in the state of Mato Grosso, located in the watershed of the Tapajós River, which runs parallel to the Xingú.

“In the garimpo you can earn a lot, but you can also lose a lot, even your sense of shame, between drinking and prostitutes,” he said.

For 18 years, up to 2002, Bião mined several prospecting sites and ran a brothel, while also working for the Marajoara lumber company. Illegal logging still thrived, especially for mahogany, though the extraction of this precious wood has been restricted in Brazil since 1996.

The disputes turned violent. A mahogany forest at the top of a hill where Bião had arrived with his team and tractors awakened the greed of a rival group, whose imminent armed attack was frustrated in an ambush in which more than 20 people died.

Bião had to flee. “My head was worth five kilos of gold,” he said. He then returned to Altamira, wanting the safety of being surrounded by family.

But the life of a boatman on a Xingú River scattered with submerged islets and hidden drop-offs in the swollen river also has its risks.

Just two months ago, Bião felt the world “go dark too quickly,” when a whirlpool swallowed him and his “voadeira”, his small motorboat. He survived by swimming more than an hour and clinging to a tree for another 11 hours.

He is a survivor of a way of life that — like the Xingú itself — will be transformed by the construction of the Belo Monte hydroelectric dam over the next five years.

The megaproject will employ 18,700 people and generate another 80,000 indirect jobs, and is expected to attract some 100,000 migrants to towns that currently total fewer than 150,000 inhabitants.

In addition, the Trans-Amazonian will finally be paved, ending the relative isolation of the Middle Xingú.

A businessman from Goiania, capital of Goiás, 2,300 km to the south, recently began buying fish in Altamira, transporting shipments of 600 to 800 kilos by truck, said Gilvan de Almeida, who has been selling fish at the local farmers market for 12 years.

With the paved highway, Altamira will be integrated with the rest of the country, and it is likely that industrial fishing will establish itself in the Xingú, affecting supplies to the local markets and the fish populations in this major river and its tributaries.