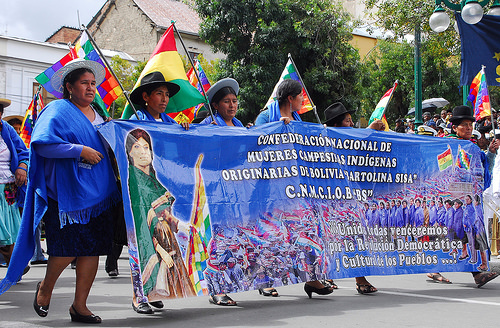 Indigenous and peasant women from every region in Bolivia at a demonstration in La Paz. Credit: Franz Chávez/IPS

LA PAZ, Feb 13 2014 (IPS) - Three years ago Bolivia passed a law to combat discrimination and racism, but no one has been convicted as a result, in spite of hundreds of legal complaints.

Rebeca Javier, a young journalist without distinguishing features, was assaulted and insulted by a man using racial slurs of the kind often used against indigenous people, while she interviewed people in the street in the southeastern city of Santa Cruz de la Sierra.

A few hours later, the man was free, in spite of the existence of filmed evidence and witnesses.

"There are no known prosecutions under the law that have led to prison sentences for these acts..." -- Verónica Sánchez, the secretary general of the Permanent Assembly for Human Rights

“I asked the prosecutor for justice, but she did not listen to me,” Javier complained to IPS.

“There has not been a single sentence” because prosecutors and judges do not classify acts of discrimination as crimes, Leoncio Gutiérrez, the head of the governmental Fight against Racism and All Forms of Discrimination, told IPS.

“If there is a law, there should be a penalty,” Griselda Sillerico, the acting ombudsperson, told IPS. She condemned “the impunity” that continues to condone discrimination in this country of 10.3 million people, the majority of whom are indigenous, and where the president since 2006 has been Evo Morales, a native Aymara.

“Those in charge of prosecutions are not forceful and convincing, and justice cannot be permissive and tolerant,” she said. In her view, the problem resides in the system of administration of justice in Bolivia, a plurinational state under its 2009 constitution.

On Dec. 31, after holding him for eight hours, the prosecutor in the Javier case freed the aggressor, Víctor Hugo Soria, in spite of proof and witnesses’ testimony that he had hit Javier, spat on her and insulted her with phrases like “colla de mierda” (roughly translated it means “bloody Indian”) which are used against Aymara women by racist sectors in the west of the country.

Javier, a Spanish-speaking journalist for one of the foremost television channels in the region, described her feelings of impotence in the face of the prosecutor’s action, and said she had lodged a second legal complaint. Now the case is being investigated by a police department special victims unit.

In October 2010 Morales promulgated the Law Against Racism and All Forms of Discrimination, which was controversial from the outset because it included sanctions against the media if they disseminated “racist and discriminatory ideas,” with the penalty of a temporary ban for up to a year.

Promotors of the law, which was welcomed among the indigenous peoples, are now working three years later on its dissemination via social agencies, through eight departmental committees, the ombudsman’s office and the Permanent Assembly for Human Rights, Gutiérrez said.

The law is intended to eliminate racist behaviour and all forms of discrimination, and to consolidate public policies for protection and prevention, according to Article 1.

Actions committed for racist motives are criminalised, as are discrimination, dissemination and incitement to racism or discrimination, participation in racist or discriminatory organisations or associations, and insults or other verbal aggression. Penalties can range from one to seven years of imprisonment.

In Sillerico’s view, the barriers to enforcing the law are related to the difficulty in dismantling a “colonial state” that is embedded in Bolivian society and is indifferent to the problem.

“It is remarkable that there are no known prosecutions under the law that have led to prison sentences for these acts, and three years later there is no progress evident in the judicial branch, which is in charge of enforcement,” Verónica Sánchez, the secretary general of the Permanent Assembly for Human Rights in La Paz (APDHLP), told IPS.

Much the same happens with cases that come to international notice, like that of 10 teenage girls who applied to enrol in a private all boys’ school in the central city of Cochabamba in 2012.

Their request unleashed protests by the school’s staff, students and parents, in spite of a law in Bolivia prohibiting sex segregation in education, Julieta Montaño, head of the Legal Office for Women, an NGO, told IPS.

“The mothers of the boy students said they would not be responsible if the girls were raped,” said Montaño, who managed to have charges laid against eight leaders, parents and teachers who opposed the girls’ entry to the school.

The girls were eventually admitted after an agreement was reached, but the criminal case is proceeding at snail’s pace. “We are not seeking the maximum penalty; we just do not want the crime to go unpunished,” in order to send a message against gender discrimination, the lawyer said.

Between January and October 2013, the Vice-Ministry of Decolonisation accepted 135 complaints about racism or discrimination, most of them based on sexual orientation and educational level, and 57 percent of them arising in public agencies.

One example quoted by the ombudsman’s office is a xenophobic statement made by Isaac Ávalos, a senator for the ruling Movimiento al Socialismo (MAS – Movement Toward Socialism), in 2012. “Out of every 10 Colombians who come to Bolivia, eight are involved in illicit activities,” he said, as a justification of public insecurity.

Later he apologised for his words.

“I would not like to see anyone sent to prison because of discrimination, that would be the worst thing that could happen to us” as a society, Jorge Medina, an Afro-Bolivian congressman and the principal promotor of the law, told IPS.

“The law is not necessarily punitive, and its spirit is not to fill the prisons with those who discriminate,” said the MAS lawmaker.

Medina is in favour of conciliation methods by means of an apology from the aggressor, but he is concerned about the lack of follow-up in cases that should be resolved in the ordinary courts.

APDHLP’s Sánchez supports education on values and respect for differences with programmes for students. “It’s an issue of mental structure” that must be changed by training and policies, she said.

The case with the greatest repercussions to date has been the opening of a lawsuit against the Fides news agency and the newspapers El Diario and Página Siete. The government is accusing them of incitement to racism for alleged distortion in their reports on a speech by Morales on Aug. 15, 2012.