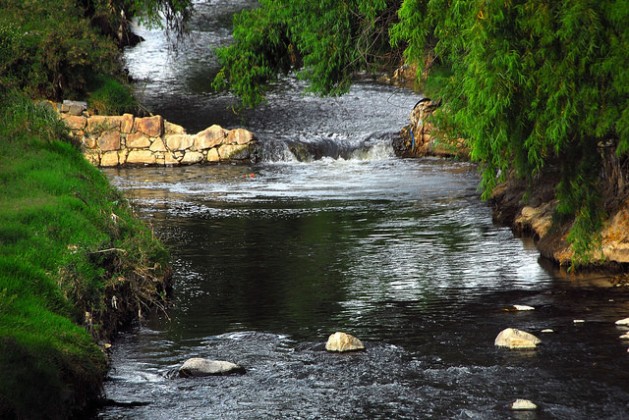 The high level of pollution in the Rocha river, which runs across the central Bolivian city of Cochabamba, is clearly visible during the dry season. Credit: Franz Chávez/IPS

LA PAZ, May 19 2014 (IPS) - The law for the defence of Mother Earth passed by Bolivia a year and a half ago has not yet moved from good intentions to concrete action.

The Framework Law on Mother Earth and Integral Development for Living Well, in effect since Oct. 15, 2012, outlines principles for making a shift from classic development models to an integral model “in harmony and balance with nature, recovering and strengthening local and ancestral knowledge and wisdom.”

The law enshrines the legal rights of nature, condemns the treatment of Mother Earth’s environmental functions as merchandise rather than gifts from nature, and requires efforts to prevent and avoid damage to the environment, biodiversity, human health and intangible cultural heritage.

Chapter four of the law establishes an institutional framework on climate change, centred around an office called the “plurinational authority for Mother Earth”.

The director of that unit, Benecio Quispe, was appointed on Feb. 18 and is still in the process of naming a team and setting up an office.

The first activity organised by Quispe’s office was the First National Workshop on Climate Change Policies targeting social, academic, public and private organisations and representatives of the different levels of government: central, departmental (provincial) and municipal.

The aim of the two-day workshop that ended Saturday May 17 was to help conceive of climate change policies with community participation and input.

The framework law could be used to create controls and monitoring systems in regions exposed to deforestation and fires in forested areas, lawmaker David Cortés of the governing Movement Towards Socialism (MAS), who is also a member of the Global Legislators Organisation (GLOBE International), told IPS.

The biggest study so far on environmental legislation, published by Globe International and the Grantham Research Institute on Climate Change and the Environment at the London School of Economics, praised the Mother Earth law as a “sweeping overhaul” of the national management of natural resources, climate and ecosystems.

But it also said the legislation failed to set out quantifiable targets that would make is possible to assess its implementation.

Application of the law is moving ahead slowly with great difficulty “because the means of production, neoliberal policies” and business community are characterised by the careless exploitation of natural resources, lawyer Víctor Quispe (no relation to the director of the Mother Earth authority), who is also an adviser to the lower house of Congress, told IPS.

Environmental awareness has grown since the law was passed, said Cortés, who cited, for example, efforts by the authorities to generate water saving habits among the population.

But while the framework law requires new legislation to enable its application and enforcement, other initiatives are seeking solutions to concrete problems, like water.

This was a central theme in Cortés’s presentation at the latest meeting of Globe International, held Feb. 27-28 in the U.S. Senate in Washington, D.C.

In Bolivia, climate change has led to the melting of glaciers, which has reduced supplies of water to cities in the dry season. At the same time, it has intensified rainfall and flooding in the months of December and January, Cortés said.

To preserve water, the government launched the “My Water Programme” in 2011, aimed at improving supplies for human consumption and irrigation while helping to guarantee food sovereignty, reduce poverty and boost agricultural productivity.

So far, the Programme benefits 2,937 projects in 98 percent of the country’s 327 municipalities, with an investment of 118 million dollars, a source with the Productive and Social Fund, which is carrying out the initiative, told IPS.

These projects respond to demand for water for consumption and irrigation, in urban areas by means of systems of distribution to households and in rural areas by harnessing sources and building mini-dams.

Pollution is another problem. For instance, the authorities are attempting to clean up the Rocha river, which runs across the central city of Cochabamba. Some 50 factories dump waste into the river.

When rainfall is abundant, the tree-lined Rocha river runs clear. But in the dry season it becomes a source of pollution, with nitrates and sulphates above the permitted levels, according to the Cochabamba city government’s Mother Earth protection office.

The director of the office, Germán Parrilla, told IPS that the authorities were implementing “an integral basin management plan that starts at the headwaters” of the river which runs through both rural and urban areas.

The efforts include the removal of solid waste dumped into the river by local residents and rubble that locals have used to fill up part of the basin to gain land, as well as fines for polluters, in line with the 44 recommendations issued by the comptroller’s office in 2011, Parrilla explained.

In the meantime, Quispe the lawyer is pushing for parliamentary approval of a bill on the reforestation of mining areas in the department of Potosí, to improve air quality in places where waste from tin, zinc and wolfram mines was abandoned.

But the congressional adviser’s main objective is the clean-up of the Pilcomayo river, which emerges in Potosí and runs north to south across the municipalities of Chuquisaca and Tarija before crossing the border into Argentina and Paraguay.

The Pilcomayo river carries mineral waste dumped by companies mining near its headwaters, which kills off fish life downstream.

“It is a question of life or death,” said the lawyer, who hopes the Economic Development Commission will pass the bill he submitted.

The initiative would bring together a number of municipalities to carry out an environmental impact study, adopt prevention measures and clean up the river with financial support from the governments of Potosí, Chuquisaca and Tarija.