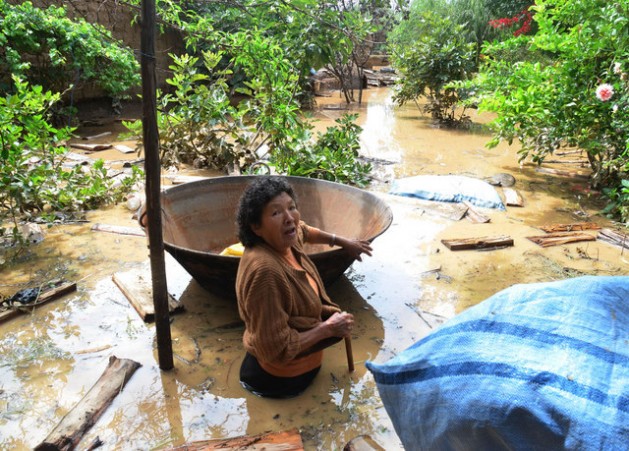 A local resident tries to save some of her belongings during the floods in Bolivia’s Amazon department of Beni. Credit: Courtesy of Diario Opinión

LA PAZ, Apr 4 2014 (IPS) - Unusually heavy rainfall, climate change, deforestation and two dams across the border in Brazil were cited by sources who spoke to IPS as the causes of the heaviest flooding in Bolivia’s Amazon region since records have been kept.

Environmental organisations are discussing the possibility of filing an international legal complaint against the Jirau and Santo Antônio hydroelectric dams built by Brazil, which they blame for the disaster that has already cost 59 lives in Bolivia and material losses of 111 million dollars this year, according to the Fundación Milenio.

Bolivian President Evo Morales himself added his voice on Wednesday Apr. 2 to the choir of those who suspect that the two dams have had to do with the flooding in the Amazon region. “An in-depth investigation is needed to assess whether the Brazilian hydropower plants are playing a role in this,” he said.

The president instructed the foreign ministry to lead the inquiry. “There is a preliminary report that has caused a great deal of concern…and must be verified in a joint effort by the two countries.”

Some 30,000 families living in one-third of Bolivia’s 327 municipalities have experienced unprecedented flooding in the country’s Amazon valleys, lowlands and plains, and the attempt to identify who is responsible has become a diplomatic and political issue.

Environmentalists argue that among those responsible are the dams built in the Brazilian state of Rondônia on the Madeira river, the biggest tributary of the Amazon river, whose watershed is shared by Brazil, Bolivia and Peru.

In Bolivia – where the Madeira (or Madera in Spanish) emerges – some 250 rivers that originate in the Andes highlands and valleys flow into it.

“It was already known that the Jirau and San Antonio [as it is known in Bolivia] dams would turn into a plug stopping up the water of the rivers that are tributaries of the Madera,” independent environmentalist Teresa Flores told IPS.

“Construction of a dam causes water levels to rise over the natural levels and as a consequence slows down the river flow,” the vice president of the Bolivian Forum on Environment and Development (FOBOMADE), Patricia Molina, told IPS.

Her assertion was based on the study “The impact of the Madera river dams in Bolivia”, published by FOBOMADE in 2008.

“The Madera dams will cause flooding; the loss of chestnut forests, native flora and fauna, and fish; the appearance and recurrence of diseases such as yellow fever, malaria, dengue; the displacement of people, increased poverty and the disappearance of entire communities,” the study says.

“Considering all of the information provided by environmental activists in Brazil and Bolivia, by late 2013 everything seemed to indicate that the elements for a major environmental disaster were in place,” Environmental Defence League (LIDEMA) researcher Marco Octavio Ribera wrote in an article published Feb. 22.

But Víctor Paranhos, the head of the Energia Sustentável do Brasil (ESBR) sustainable energy consortium, rejected the allegations.

The dams neither cause nor aggravate flooding in Bolivia “because they are run-of-the-river plants, where water flows in and out quickly, the reservoirs are small, and the dams are many kilometres from the border,” he told IPS.

Moreover, the flooding has covered a large part of the national territory in Bolivia, not only near the Madeira river dams, he pointed out.

The ESBR holds the concession for the Jirau hydropower plant, which is located 80 km from the Bolivian border. The group is headed by the French-Belgium utility GDF Suez and includes two public enterprises from Brazil as well as Mizha Energia, a subsidiary of Japan’s Mitsui.

At the Jirau and Santo Antônio plants, which are still under construction, the reservoirs have been completed and roughly 50 turbines are being installed in each dam. When they are fully operative, they will have an installed capacity of over 3,500 MW.

Claudio Maretti, the head of the World Wildlife Fund’s Living Amazon Initiative, said “there is neither evidence nor conclusive studies proving that the dams built on the Madera river are the cause of the floods in the Bolivian-Brazilian Amazon territories in the first few months of 2014 – at least not yet.”

In a statement, Maretti recommended “integrated conservation planning, monitoring of the impacts of infrastructure projects on the connectivity and flow of the rivers, on aquatic biodiversity, on fishing resources and on the capacity of ecosystems to adapt to the major alterations imposed by human beings.”

The intensity of the rainfall was recognised in a study by the Fundación Milenio which compared last year’s rains in the northern department or region of Beni – the most heavily affected – and the highlands in the south of Bolivia, and concluded that “it has rained twice as much as normal.”

Several alerts were issued, such as on Feb. 23 for communities near the Piraí river, which runs south to north across the department of Santa Cruz, just south of Beni.

At that time, an “extraordinary rise” in the water level of the river, the highest in 31 years, reached 7.5 metres, trapped a dozen people on a tiny island, and forced the urgent evacuation of the local population.

The statistics are included in a report by SEARPI (the Water Channeling and. Regularisation Service of the Piraí River) in the city of Santa Cruz, to which IPS had access.

The plentiful waters of the river run into the Beni plains and contributed to the flooding, along with the heavy rain in the country’s Andes highlands and valleys.

The highest water level in the Piraí river was 16 metres in 1983, according to SEARPI records.

Flores, the environmentalist, acknowledged that there has been “extraordinarily excessive” rainfall, which she attributed to the impact of climate change on the departments of La Paz in the northwest, Cochabamba in the centre, and the municipalities of Rurrenabaque, Reyes and San Borja, in Beni.

Molina, the vice president of FOBOMADE, cited “intensified incursions of flows of water from the tropical south Atlantic towards the south of the Amazon basin,” as an explanation for the heavy rainfall.

She and Flores both mentioned deforestation at the headwaters of the Amazon basin as the third major factor that has aggravated the flooding.

In Cochabamba, former senator Gastón Cornejo is leading a push for an international environmental audit and a lawsuit in a United Nations court, in an attempt to ward off catastrophe in Bolivia’s Amazon region.

“The state of Bolivia has been negligent and has maintained an irresponsible silence,” he told IPS.

Molina proposes taking the case to the International Court of Justice in The Hague, to denounce the environmental damage reportedly caused by the Brazilian dams.

With reporting by Mario Osava in Rio de Janeiro.