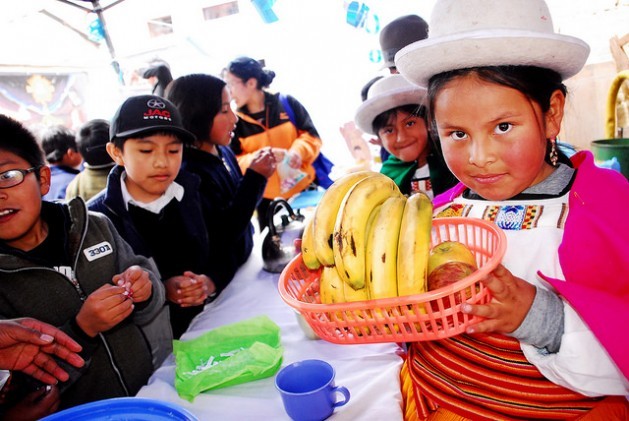 A girl in traditional festive dress from Bolivia’s highlands region displays a basket of fruit during a fair in her school in central La Paz. Fruit is the foundation of the new school meal diet adopted in the municipality, which puts a priority on natural food produced by small local farmers in the highlands. The alliance between family farming and school feeding is extending throughout Latin America thanks to laws put into motion by the Parliamentary Front Against Hunger. Credit: Franz Chávez/IPS

SANTIAGO, Nov 11 2015 (IPS) - Lawmakers in Latin America are joining forces to strengthen institutional frameworks that sustain the fight against hunger in a region that, despite being dubbed “the next global breadbasket”, still has more than 34 million undernourished people.

The members of the Parliamentary Front Against Hunger also “allot budget funds, monitor, oversee and follow up on government policies,” Rapallo told IPS at FAO regional headquarters in Santiago, Chile.

A series of successful public policies based on a broad cross-cutting accord between civil society, governments and legislatures enabled Latin America and the Caribbean to teach the world a lesson by cutting in half the proportion of hungry people in the region between 1990 and 2015.

“The Parliamentary Front Against Hunger is a key actor in the implementation of CELAC’s Food Security Plan, for the construction of public systems that recognise the right to food.”-- Raúl Benítez, regional director of FAO

But the 34.3 million people still hungry in this region of 605 million are in need of a greater effort, in order for Latin America to live up to the 2030 Agenda for Sustainable Development, which is aimed at achieving zero hunger in the world.

The Sixth Forum of the Parliamentary Front Against Hunger (PFH), to be held in Lima Nov. 15-17, will seek to forge ahead in the implementation of the “plan for food security, nutrition and hunger eradication in the Community of Latin American and Caribbean States (CELAC) by 2025.”

The plan, which sets targets for 2025, is designed to strengthen institutional legal frameworks for food and nutritional security, raising the human right to food to the highest legal status, among other measures.

“The Parliamentary Front Against Hunger is a key actor in the implementation of CELAC’s Food Security Plan, for the construction of public systems that recognise the right to food,” the regional director of FAO, Raúl Benítez, told IPS.

The PFH was created in 2009 with the participation of three countries. Six years later, “there are 15 countries that have a strong national parliamentary front recognised by the national Congress of the country, which involves parliamentarians of different political stripes, all of whom are committed to the fight against hunger,” Rapallo said.

As a result, “laws on family farming have been passed, in Argentina and Peru, and in the Dominican Republic there are draft laws set to be approved. To these is added the food labeling law in Ecuador,” the expert said, to illustrate.

In Bolivia, the School Feeding Law in the Framework of Food Security and the Plural Economy, passed in December 2014, is at the centre of the fight against poverty in an integral fashion, Fernando Ferreira, the head of the national Parliamentary Front for Food Sovereignty and Good Living, told IPS in La Paz.

This model, which draws on the successful programme that has served school breakfasts based on natural local products in La Paz since 2000, is now being implemented in the country’s 347 municipalities.

The farmer “produces natural foods, sells part to the municipal government for distribution in school breakfasts, and sells the rest in the local community,” said Ferreira, describing the cycle that combines productive activity, employment, nutrition and family income generation.

The school breakfast programme has broad support among teachers because it boosts student performance and participation in class, Germán Silvetti, the principal of the República de Cuba primary school in the centre of La Paz, told IPS.

“They didn’t used to care, but now they demand their meals,” Silvetti said. “Some kids come to school without eating breakfast, so the meal we serve is important for their nutrition.”

In the past, students didn’t like Andean grains like quinoa. But María Inés Flores, a teacher, told IPS she managed to persuade them with an interesting anecdote: “astronauts who go to the moon eat quinoa – and if we follow their example we’ll make it to space,” she said to the children, who now eat it with enthusiasm.

Appealing to the appetites of the 145,000 students served by the school breakfast programme is a daily challenge, but one that has had satisfactory results, such as the reduction of anemia from 37 to two percent in the last 15 years, Gabriela Aro, one of the creators of the programme and the head of the municipal government’s Nutrition Unit, told IPS.

Authorities in Bolivia say the government’s “Vivir Bien” or “Good Living” programme will reduce the proportion of people in extreme poverty which, according to estimates from different national and international institutions, stands at 18 percent of the country’s 11 million people. 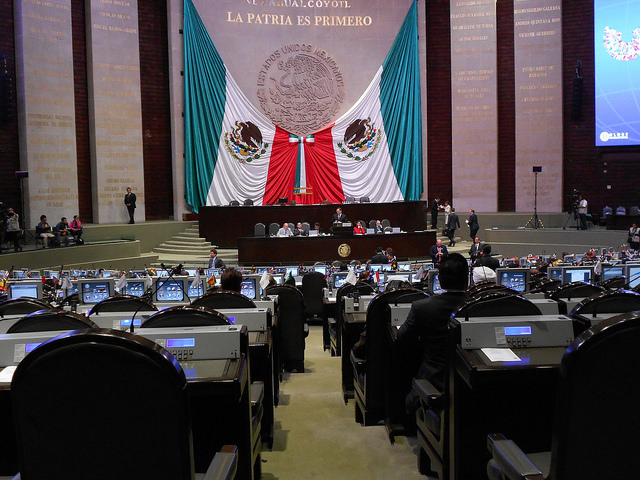 In the Mexican Congress, lawmakers with the Parliamentary Front Against Hunger are pushing through laws that boost food security and sovereignty, to guarantee “the right to sufficient nutritional, quality food” that was established in the constitution in 2011. Credit: Emilio Godoy/ IPS

In Mexico, a nation of 124 million people, meanwhile, poverty has grown in the last three years, revealing shortcomings in the strategies against hunger, which legislators are trying to influence, with limited results.

“Legislators must be more involved in following up on this, one of the most basic issues,” Senator Angélica de la Peña, coordinator of the Mexican chapter of the Parliamentary Front Against Hunger, told IPS in Mexico City. “Even if we define budgets and programmes, they continue to be resistant to making this a priority.”

There are 55.3 million people in poverty in Mexico, according to official figures from this year, and over 27 million malnourished people.

The increase in poverty reflects the weaknesses of the National Crusade Against Hunger, the flagship initiative of conservative President Enrique Peña Nieto, which targets undernourished people living in extreme poverty.

The Crusade is concentrated in 400 of Mexico’s 2,438 municipalities, involves 70 federal programmes, and hopes to reach 7.4 million hungry people – 3.7 million in urban areas and the rest in the countryside.

The Senate has not yet approved a “general law on the human right to adequate food”, which was put in motion by the Parliamentary Front and involves the implementation of a novel constitutional reform, which established in 2011 that “everyone has a right to sufficient nutritional, quality food, to be guaranteed by the state.”

But in spite of the limitations, Mexico’s social assistance programmes do make a difference, albeit small, for millions of people.

Since February, Blanca Pérez has received 62 dollars every two months, granted by the Pension Programme for the elderly (65 and older), which forms part of the National Crusade Against Hunger.

“It helps me buy medicines and cover other expenses. But it is a small amount for people our age – it would be better if it was every month,” this mother of seven told IPS. She lives in the town of Amecameca, 58 km southeast of Mexico City, where half of the 48,000 inhabitants live in poverty.

Pérez, who helps her daughter out in a small grocery store, is also covered by the Popular Insurance scheme, a federal government programme that provides free, universal healthcare. “These programmes are good, but they should give more support to people like me, who struggle so much,” she said.

Above and beyond the progress made, Rapallo said Latin America today has two urgent needs: reduce the number of hungry people in the region to zero while confronting the problem of overnutrition – another form of malnutrition.

Overweight and obesity “are a public health challenge, a hurdle to national development, and a moral requisite that we must address,” said Rapallo.

In that sense, he added, “parliamentarians are essential” to bring about public policies that contribute to good nutrition of the population and their growing demands.

“There are parliamentarians that are real leaders in their respective countries. But if all of this were not backed by a strong civil society that puts the issue firmly on the agenda, we wouldn’t be able to talk about results,” he said.

With reporting by Emilio Godoy in Mexico City and Franz Chávez in La Paz.