LIMA, Jul 9 2013 (IPS) - Long before he became president of the World Bank, South Korean physician Jim Yong Kim was on the dusty streets of the working-class Lima neighbourhood of Carabayllo, helping cure local residents of tuberculosis.

His work with the poor and the new approach he is seeking in the World Bank filled experts and officials in South America with enthusiasm during his recent visit to three countries in the region. 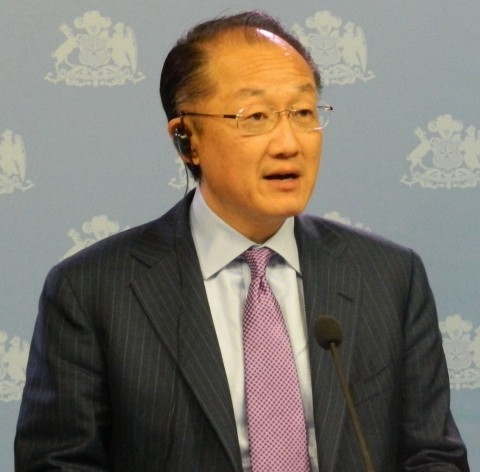 Kim, president of the World Bank since July 2012, met Saturday with Bolivian President Evo Morales after visiting Peru and Chile. During his Jun. 29-Jul. 7 tour, he also met with the presidents of these two countries, Ollanta Humala and Sebastián Piñera, respectively, putting an emphasis on the changes that the international lender has undergone.

“There was a time in the history of the World Bank, 20 years ago, when the approach looked more like prescriptions,” Kim told IPS after a Jul. 4 press conference he gave in Santiago.

Not giving blanket prescriptions to all countries is one of the biggest changes, he said, “because it doesn’t make sense to force a government into debt over things it doesn’t want,” he had said the day before during a meeting with students and academics at Peru’s Pontifical Catholic University in Lima.

“We come to countries that ask us to work on different kinds of problems,” he added.

Kim said in Santiago that “in the early-1990s when I had just graduated from college, one of the first trips that I made to Washington DC was to be part of a group called 50 Years Is Enough. I was part of a demonstration to try to close the World Bank…because we thought that the prescriptions were too prescriptive: one-size-fits- all, just do these things and everything else will fall into place.”

Kim is right to emphasise the shift seen in recent years in the World Bank, former Peruvian deputy economy minister Carlos Casas commented to IPS. “They are listening more to governments and acting according to their demands,” he said, adding that he himself saw this when he was a government official in 2010.

“His visit could be seen as a confirmation of that new approach,” said Casas, who is head of the economy department in the Universidad del Pacífico in Lima.

The World Bank has no other choice today, because countries like Peru have strong macroeconomic figures and no longer depend as they did before on aid from multilateral lenders, he said.

“Technical assistance in designing reforms of the state is perhaps the most important thing the Bank can provide at this time, because at the level of economic resources its contribution has shrunk in the region,” he added.

According to the vice president of research at the Pontifical Catholic University of Peru, Pepi Patrón, Kim’s background is important when it comes to moving the World Bank towards a kind of assistance that sees the different faces of poverty and its multidimensional nature.

She told IPS that this means a coordinated, multifaceted look at different areas: health, education, adaptation to climate change, public policies with a gender focus, and interculturalism, among other aspects.

“This new president is a doctor, not a banking and finance specialist, who has experience that helps him understand poverty, not only in monetary terms,” said Patrón, who is also a member of the Council of Eminent Persons who advise World Bank chief economist Kaushik Basu.

If only the monetary dimension is taken into account – in other words, the 284 soles (just over 100 dollars) a month that according to official figures put people in Peru over the poverty line – the poverty rate in Peru would be reduced to zero with just two percent of the public budget, Federico Arnillas, vice president of the Mesa de Concertación para la Lucha contra la Pobreza – a public-private partnership against poverty – told IPS.

When Kim lived in Peru, he worked as a doctor in the poor neighbourhood of Carabayllo, supporting the work of Gustavo Gutiérrez, the Catholic priest who wrote the first book on liberation theology, the progressive current in the Catholic Church in Latin America that attempted to respond to the question of how to be a Christian in a poor, oppressed region.

“This testimony is interesting because the challenge we are facing is how to put the option for the poor at the centre of policy-making,” Arnillas said.

Kim took advantage of his visit to Lima to meet with Gutiérrez and two dozen other representatives of civil society.

According to Patrón, who took part in the meeting, Kim said it was possible to avoid the “natural resource curse” and generate development, citing his home country, South Korea, as an example, which has progressed on the basis of technology, without mineral wealth.

Kim said there was no dichotomy between sound macroeconomic fundamentals and social development.

In Santiago, he highlighted experiences in the region that could serve as lessons, like Chile’s copper price stabilisation mechanism.

In La Paz, Kim presented a virtual map of Bolivia showing projects financed by international donors. He also launched a web site for Bolivians to offer suggestions and ideas to public institutions that implement projects or administer public services.

In addition, the World Bank signed a memorandum of understanding with the Bolivian government for the sustainable production of quinoa – a protein-rich seed from the Andean highlands – and other traditional agricultural products. The World Bank has projects worth more than 500 million dollars in Bolivia, South America’s poorest country.

* With additional reporting by Marianela Jarroud in Santiago.