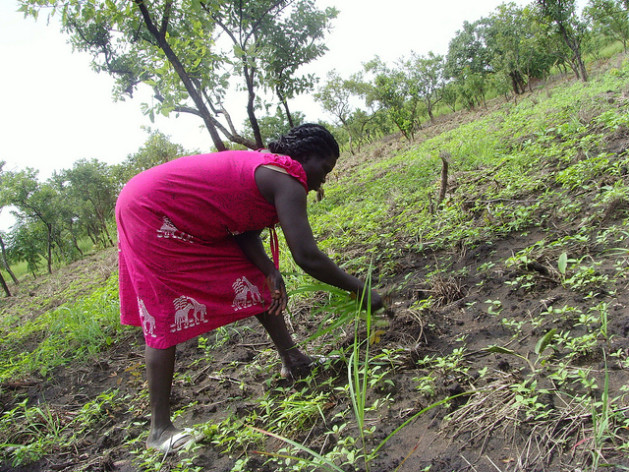 WASHINGTON, Mar 6 2013 (IPS) - The World Bank is urging African governments to retool their agriculture policies, particularly to include a far greater focus on agribusiness as a critical driver of future development.

The bank is now projecting that African agriculture could triple in economic size in coming years, topping a trillion dollars by 2030, powered by massively increasing domestic and international demand. With Africa by some counts the world’s fastest-growing economy, middle-class demand for food is set to quadruple by 2030, to more than 400 billion dollars.

“After years of neglect, agriculture is once again seizing the attention of African governments, business leaders, communities, and development donors, as a powerful driver of the continent’s relentless growth,” Makhtar Diop, the World Bank’s vice-president for Africa, wrote in the forward to the new report, released Monday by the bank’s Washington headquarters.

“[W]e cannot overstate the importance of agriculture … Africa now stands at a crossroads, from which it can take concrete steps to take on a much bigger role in both the regional and global markets or continue to lose competitiveness – missing a major opportunity for structural transformation.”

While African farmers currently contribute the single largest component to the continent’s annual economic growth, their sector has for decades been seen as failing to reach its full potential.

“A big part is because this agriculture is mostly being carried out by small-scale farmers who don’t have the cash to buy fertiliser and other inputs, even where it’s available.”

As a result of this and the continent’s relatively poor soils, Africa exports several key commodities that only grow well in the tropics, including coffee, tea and cocoa. But for most grains and many food crops, its countries are either barely self-sufficient or forced to import.

According to the World Bank, crop yields in Africa are just half the averages in Asia and Latin America. Meanwhile, the report notes, “Africa’s agricultural growth derives largely from opening new land to agriculture, with negative consequences for biodiversity, forests and soils.”

Scaling up and down

Even as agriculture is again receiving belated consideration from African governments and donors, “their attention should extend to agribusiness,” the report urges. “The attention focused on production agriculture will not achieve its developmental goals in isolation from agribusinesses, ranging from small and medium enterprises to multinational companies.”

“Agribusiness” refers to the full spectrum of the sector leading to and following agricultural production, including the processes that get raw farm food products into the hands of consumers and money back to farmers. Already, agriculture and agribusiness together make up nearly half of Africa’s gross domestic product.

“Absolutely, if the continent wants to become more self-sufficient, farmers need to be recognised as businessmen and businesswomen and entrepreneurs with innovative approaches to marketing crops and improving food security,” Danielle Nierenberg, the co-founder of Food Tank, a Washington think tank, told IPS.

But Nierenberg also warns against focusing too much attention on creating jobs and incomes through crops for export.

“Greater investment is needed to increase the production and consumption of vegetables, leguminous crops and perennial crops to increase both food security and incomes,” she says.

Indigenous crops, too, though often looked down upon by many middle-class consumers, tend to be both rich in micronutrients and resistant to disease, flooding and drought. As climate change takes a more significant hold on Africa, these crops will become increasingly important and economically valuable.

Further, Nierenberg notes that any greater state or donor attention placed on agriculture and agribusiness will need to maintain – or strengthen – a priority on small-scale farmers, particularly women.

“For Africa or any other developing country to succeed, there needs to be more focus on smallholders, family farms and woman farmers,” she says. “While agrodealers or small- and medium-sized seed and other input suppliers are growing across the continent, few of them are women.”

“For now, that’s fine,” he says. “These tiny mills are relatively efficient, low cost and there’s no reason any government should be subsidising large mills to come replace them.”

Maintaining a priority on the small scale has already proven difficult for many African countries. The continent currently has more than half of the world’s unused agricultural lands, which over the past half-decade has led to a massive increase in attention from international investors.

In recent years, the World Bank itself has come in for civil society criticism (including here and here) for the role it has reportedly played in promoting large-scale “land grabs” by foreign investors keen on purchasing swathes of African agricultural lands on which to grow monocultured crops for export.

The bank has repeatedly denied such allegations, and the new report devotes significant space to the need for strong environmental and social safeguards and land security systems.

“The challenge is to harness investors’ interest in ways that generate jobs, provide opportunities for smallholders, respect the rights of local communities, and protect the environment,” the report notes.

“Going forward, a key challenge is to curb speculative land investments or acquisitions that take advantage of weak institutions in African countries or disregard principles of responsible agricultural investment.”

In counteracting the potential for land-grabbing, IFPRI’s Minot says that one of the most important priorities is to establish secure land rights for rural families and communities.

“But that’s a very long, tedious and technical process,” he says. “Today, it’s a process that is indeed going forward, but it’s certainly not rushing forward.”