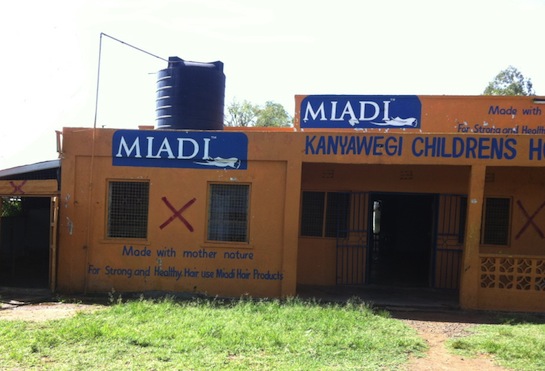 An orphanage in Kenya marked for demolition to make way for a road project funded by the World Bank. Credit: Richard Portsmouth/CC by 2.0

The bank is currently wrapping up the first of a two-year review of its environmental and social safeguards, a process that has included dozens of global consultations. Initial discussion on those developments is slated for Saturday during semi-annual meetings between the bank and the International Monetary Fund (IMF) held in Washington. A publication date for a draft of the reforms has not yet been decided.

“All activities supported by the World Bank…should be included in the review to ensure consistency with international human rights standards,” a group of independent U.N. experts stated in a release Friday. “Doing so would improve development outcomes and strengthen the protection of the world’s poorest from unintended adverse impacts of activities financed by the Bank.”

Groups around the world are advocating for a broadening of the bank’s safeguard policies to more fully take into account specific needs related to gender, disability, indigenous rights and labour. Others worry that the reforms process could actually weaken safeguards, a fear reiterated by the U.N. experts.

As a development institution and a member of the U.N. family, the bank is obligated to give “due weight to international human rights standards”, Cephas Lumina, the U.N.’s independent expert on foreign debt and human rights, noted. “States must also adhere to their international law obligations when they act through international organisations. The World Bank is no exception.”

U.N. experts are being joined in this call by the German government. In February, Germany began a unique initiative under which all of its bilateral and multilateral engagements – including at the World Bank – would be required to undergo a rigorous human rights-related assessment.

“The World Bank is increasingly turning its attention to human rights issues,” Ralf Wyrwinski, an official with the German Ministry for Economic Cooperation and Development (BMZ), told an audience at the World Bank’s Washington headquarters on Friday. “[But] we view the [safeguards] review as an opportunity for the World Bank to include a human rights aspect more comprehensively,” Wyrwinski added.

While Wyrwinski said the German programme will require two or three years before officials can judge results, he said it has already introduced a sea change in how German development programmes look at local stakeholders.

“The major value added is that we do not look at people as target groups anymore, but rather take people as rights-holders,” he explained. “You change the view and perception of the people affected by a project.”

The World Bank has never included explicit reference to human rights in its safeguard policies, introduced in the early 1980s. This is in part because the bank is not meant to function as an “adjudicating” institution, with such polarising issues long seen as better left to the U.N. and national governments.

The World Bank has never included explicit reference to human rights in its safeguard policies.

Yet bank officials emphasise that the institution’s actions – particularly through its core focuses on empowerment, access, accountability, transparency and related issues – highlight the value it places on human rights and lead directly to results on the ground.

“There’s been a lot of general counsels who have said that we have done a lot as an institution to help achieve the realisation of human rights through policies that represent a wide range of human rights principles,” Charles Di Leva, the chief counsel for environmentally and socially sustainable development at the World Bank, told IPS.

“Any time any borrower of ours would like support in implementing any of their legal obligations, if we can do that, we would support them in doing so.”

Sustained focus on human rights gained some momentum three years ago, when an initiative called the Nordic Trust Fund (NTF) began strengthening knowledge on the subject among World Bank employees. Beyond this, bank officials have pointed to a lack of data directly linking human rights and development indicators.

“When I started this job, I asked all of the econometricians and economists about the value added [by incorporating human rights], and they said that they just couldn’t establish such a connection,” NTF coordinator Anders Zeijlon told IPS. “It seems there are too many variables at stake.”

Zeijlon noted that he was “surprised” by the findings, but admitted it is difficult for the bank to prioritise human rights-related indicators without “hard-nosed data” that can explain their impact. However, related studies are underway.

“In the coming years you will see a large number of evaluations and more detailed looks at specific sectors and so on,” he said. “The challenge will be to take that information and try to aggregate it in a useful way.”

World Bank officials and member states are currently discussing a recent vision paper, spearheaded by the bank’s new president, Jim Yong Kim, that outlines an evolving focus for the institution in coming decades, including a goal of ending extreme poverty by 2030 and a renewed pledge to focus on diminishing “pockets” on extreme poverty.

Yet some suggest that as countries make strides in lifting more people out of poverty, many of those left in “extreme poverty” will likely belong to groups that have long been marginalised due to ethnicity or political views. In such situations, an inability to deal with human rights directly could seriously undermine anti-poverty efforts.

“This new focus on the most vulnerable is absolutely key to sustainable development, but missing is any mention of human rights or of the problems that discrimination, marginalisation and exclusion create, both as hurdles to getting out of poverty and as underlying causes,” Jessica Evans, a Washington-based researcher with Human Rights Watch (HRW), an advocacy group, told IPS.

“What we would like to see is for the bank to take a conscious approach to eliminating discrimination and effectively promoting substantive equality,” Evans said. “This would include examining the environment of exclusion and marginalisation at the national level whenever it is negotiating country strategies.”

On Friday, HRW and eight other organisations called on Jim Yong Kim “to make a firm commitment to respect, protect, and fulfil human rights in all [World Bank] activities”.