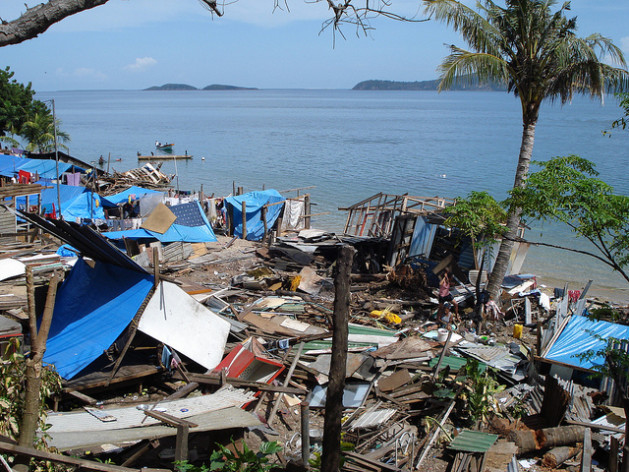 Informal settlers on prime land in Papua New Guinea’s capital, Port Moresby, are living under tarpaulins amid the debris of their homes after two attempted evictions to make way for a luxury waterfront development. Credit: Catherine Wilson/IPS

WASHINGTON, Apr 18 2013 (IPS) - Two of the world’s largest multilateral institutions have released new data linking greater urbanisation with higher levels of human development, and are announcing that they will place greater priority on issues of urbanisation in coming decades.

According the World Bank and International Monetary Fund (IMF), urban areas in the developing world look set to pull in a staggering 96 percent of the additional 1.4 billion people expected in those countries by 2030. According to some metrics, that could offer significant opportunities – if done correctly.

Unveiling a major joint annual report here on Wednesday, the two Washington-based institutions noted that more-urbanised countries have shown far higher strengthening of development indicators than have less-urbanised countries. This is particularly striking with regards to the Millennium Development Goals (MDGs), the international development-related aims agreed to in 2000 and which are to be achieved by 2015.

The GMR report, now in its 10th year, offers an annual snapshot of global progress towards the MDGs. An accompanying brief suggests that significant progress has been made in reducing extreme poverty in recent decades, with those living on 1.25 dollars a day going from half the developing world in 1981 to 21 percent in 2010 – despite the population in those countries increasing by nearly 60 percent during that period.

A notable outlier in this data is sub-Saharan Africa, however, where levels of extreme poverty have doubled over the past three decades, to around 414 million. The World Bank recently unveiled a new goal of ending extreme poverty by 2030.

“The sharp increase in the number of poor people in Africa is a sad indictment of the fact that the needs of rich countries and elites have too often been pursued at the expense of the poorest,” Emma Seery, a spokesperson with Oxfam, a humanitarian group, told IPS in an e-mail.

“Accelerating progress towards the World Bank’s goal of ending extreme poverty means taking tough choices and tackling the vested interests that stand in the way of a fairer world.”

While the new GMR offers a far sunnier view of the international macroeconomic environment than it did last year, with head IMF economists suggesting that today’s situation is far more conducive to achieving the MDGs, the MDG “scorecard” Wednesday was rather gloomier.

“There’s really no time to be complacent,” Jos Verbeek, a World Bank economist and lead author of the GMR, told reporters at the report’s launch. “Current analysis shows that without a vast acceleration of progress, the world should expect that globally hardly any additional MDG will be attained.”

Yet Verbeek suggests that fast-growing levels of urbanisation could offer governments a key opportunity. Urbanisation and higher incomes have been found to go hand in hand, he points out, and urban areas have been found to be doing far better at attaining the MDGs than rural areas, particularly in rates of extreme poverty.

“One conclusion is that we should encourage urbanisation – not hinder it or try to slow it down – while another conclusion is we should facilitate mobility, particularly in those countries that have partly urbanised,” Verbeek notes.

“How do we promote urbanisation? … Better urban planning comes first, which will allow government and city officials to be in the driver’s seat, and not be pushed around by private financiers or donors, who often emphasise their own priorities, which are not always aligned with the country or the city.”

At the same time, nearly three-quarters of the global poor continue to live in rural areas. Reflecting a broad consensus, both the bank and fund are clear that efforts need to be increased in coming years to help bridge the rural-urban divide.

“Providing high-quality health and education remains a huge challenge that is vital to reducing poverty wherever it occurs,” Oxfam’s Seery says.

“But for the rural majority of poor people, access to land and investment in smallholder agriculture are also crucial steps towards escaping the poverty trap. The World Bank’s call to end the scourge of extreme poverty is timely and requires tackling these obstacles head on.”

Further, while much of the correlation between development and urbanisation is because service provision is far more efficient when people live closely together, World Bank and IMF officials are clear that poorly planned urbanisation can also have the opposite effect – resulting in slums in which many inhabitants are deprived of both civic amenities and, at times, civil rights.

“The urban indicators for most of these targets are superior to the same indicators in the rural sector. At the same time, if you allow for completely unplanned development of the urban areas, what you’ll get is development of the slums, where there will be pockets in which the standard of living will be much worse.”

Basu warns that “unfettered urbanisation is [no] cure-all”. He also emphasises that urban planning is not an area in which market forces alone can deliver acceptable results, stating instead that this process needs “conscious effort” – clearly indicating an area in which the bank sees its technical support increasing in coming years.

Already, experts today estimate that almost a billion people live in slums, nearly two-thirds of which are thought to be in Asia – one of the world’s fastest-urbanising areas.

“To cope with urban growth, a coordinated package of essential infrastructure and services is needed,” the GMR states.

“Only by meeting essential needs related to transportation, housing, water and sanitation as well as education and healthcare can cities avoid becoming hubs of poverty and squalor.”