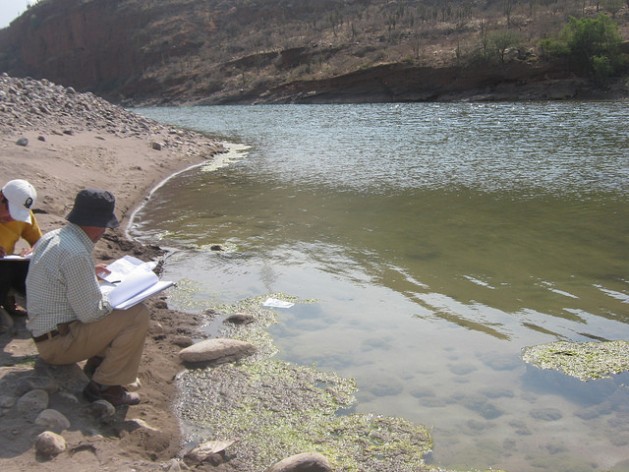 LIMA, Jun 10 2014 (IPS) - Peru urgently needs a national plan for the management of water over the next two decades, one that will take into account the effects of climate change and the social and environmental conflicts triggered by problems over water.

In his office surrounded by papers, maps and graphics, Humberto Cruz, an engineer with the national water authority, ANA, told IPS that the country desperately needs a plan to improve the unequal distribution of water and its inefficient use in this South American country.

Cruz and other technicians in ANA spent over a year drawing up a draft plan, which President Ollanta Humala said he would present in March. However, it has not yet been passed by Congress, despite the president’s emphasis of the importance of recognising that access to clean water is a basic right.

The situation involving water in Peru is not encouraging, although some efforts have been made, the ANA technicians told IPS.

“The information we have on the watersheds in the highlands and the Amazon rainforest is very generic….What I have found is data with a very high margin of error,” Cruz said.

The expert said that due to the margin of error, the estimates were up to 20 percent too high or too low, which means there is a distorted assessment of the water situation in the country – and as a result, decisions on access to water may be misguided.

There is no reliable information on the amount of water in 119 of the 159 river basins in the Andes highlands and Amazon jungle that supply household needs as well as different activities in the country, such as mining, the oil and gas industry and agriculture.

The 119 watersheds for which there is no reliable information represent 75 percent of the country’s river basins and over 95 percent of the volume of water available to the Peruvian population. And they are mainly in the areas where social conflicts have broken out over water.

“Due to the lack of reliable information, the decisions taken by the state with regard to productive activities in the interior of the country can affect communities that depend heavily on water, especially in the upper reaches of the watersheds,” environmental engineer Pavel Aquino, who saw these cases in his work in ANA and the Ministry of Energy and Mines, told IPS.

Aquino said that problems over access to water fuelled rural migration, which in turn drives up demand for water in cities along the coast, where it is especially scarce.

“There is unequal distribution of water in the national territory,” Ismael Muñoz, an economist at the Pontifical Catholic University, told IPS. “The result is that although 70 percent of the population lives along the Pacific coast, they have only 1.8 percent of the water, because of the way nature has distributed it,” he wrote in an academic paper.

Muñoz also noted that “because the water is mainly – up to 80 percent – used in agriculture, the state has prioritised coastal areas when it comes to investment in water supplies, accentuating the regional inequality with respect to the highlands and the jungle.”

The other problem, according to Aquino, is that “a high margin of error in the information on water supply in the river basins” means that if the estimate of the amount of water is too high, less money is invested in infrastructure works for water supply, such as reservoirs, dams, and water transfer or irrigation projects.

Conversely, if the estimate of the water supply is too low, more funds than are strictly necessary could be invested in such infrastructure, the engineer said.

There is only reliable data available on the main rivers along the coast. In the case of rivers in the Amazon jungle and the Andes, information has not been steadily available over the last 10 years, nor is there broad coverage, the ANA technicians said.

SENAMHI is in charge of keeping hydrological statistics and supplying them to the institutions involved, like ANA. But insufficient budget funds have made it impossible to install the necessary stations.

For that reason, ANA and the Environment Ministry are working to set up new stations in pilot basins.

According to SENAMHI technicians consulted by IPS, in the case of basins that do not have a single monitoring station, data is extrapolated from the information available on the nearest basins.

The ANA experts, meanwhile, told IPS that at least 10 years worth of solid data is needed in order for the results of the monitoring to be reliable.

The preliminary draft of the national plan on the management of water includes an assessment of the quality and quantity of water in the country’s river basins, based on this patchy data.

ANA’s press office informed IPS that the draft law is being reevaluated due to changes in the leadership of the water authority in April. The new head of the agency, Juan Carlos Sevilla, has not publicly spoken out on the plan that was already ready when he was appointed.

Josefa Rojas, the Environment Ministry’s head of climate change adaptation projects, told IPS that the preliminary evaluation of water supplies that was carried out was a step forward and that “we can’t wait until we have all of the information. It’s time to accumulate verified data in order to project what is going to happen with the water that we need in order to live.”

The Ministry has put a priority on the gathering of detailed information on 30 high-mountain basins, due to the accelerated melting of the glaciers which feed the rivers.

Although the plan is still pending, ANA managed to get the Ministry of Economy and Finance to transfer some four million dollars, of the 12.5 million dollars requested to carry out the studies needed to assess the quantity of water in 12 basins where social conflicts over water are raging.

ANA is also helping to organise the creation of water councils, to draw up new hydrological studies and improve watershed management in coordination with regional and local authorities, local residents and companies. But the challenges that lie ahead are daunting.