This story is part one of a three-part series on how social and economic inequalities impact cancer treatment. The second and third installments will take a closer look at how low- and middle-income countries in the Middle East and Latin America are coping with their cancer burdens and employing multiple strategies to stem the epidemic. 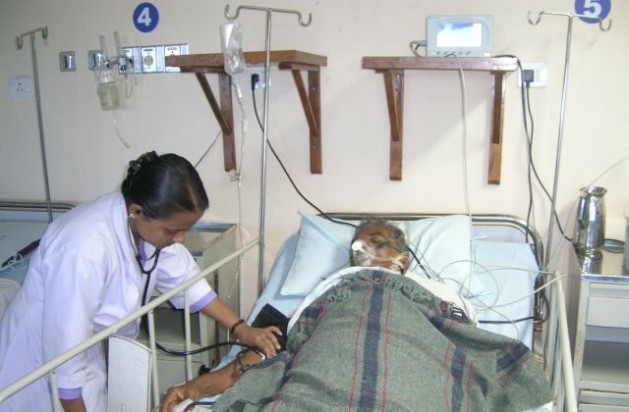 A patient being treated at the Regional Cancer Centre in Thiruvananthapuram, India. Credit: K.S. Harikrishnan/IPS

UNITED NATIONS, Apr 9 2014 (IPS) - Few people in the world can claim to be untouched by cancer. If not personally battling it in one form or another, millions are at this very moment sitting beside loved ones fighting for their lives, visiting friends recovering from chemo, or researching the latest treatments for their relatives.

The forecast by the world’s leading cancer research organisation predicts that things will only get worse. The World Cancer Report 2014 says we can expect a 70 percent increase in new cancer cases over the next 20 years, hitting 25 million by the year 2025.

Produced every five years by the International Agency for Research on Cancer (IARC), a specialised agency of the Geneva-based World Health Organisation (WHO), the 632-page report noted that new cancer cases rose from 12.7 million in 2008 to 14.1 million in 2012. The same year recorded 8.2 million cancer-related deaths globally.

A Barrier to Development

Lung cancer tops the list of the most frequently diagnosed forms of the disease, with 1.8 million cases or roughly 13 percent of the world’s total cancer burden.

Breast cancer follows a close second, with about 1.7 million cases, while cancers of the large bowel account for 9.7 percent of all cases reported worldwide.

Lung cancer remains the biggest killer, claiming 1.6 million lives annually, while cancers of the liver and stomach are responsible for 800,000 and 700,000 deaths respectively.

The massive loss of life is coupled with astronomical healthcare costs – about 1.6 trillion dollars in 2010.

Increasingly, the disease is gaining a foothold in low- and middle-income countries that have neither the experience nor the financial resources to deal with it.

Experts from around the world say that, when it comes to cancer, developing countries are caught between the devil and the deep blue sea.

On the one hand, they continue to experience high rates of infection-related cancers like cervical, stomach and liver cancer, all of which are associated with poverty: lack of access to vaccines, an absence of screening facilities, and inadequate treatment options.

On the other hand, cancer associated with a wealthier lifestyle – such as cancers of the lung, breast and large bowel, which are linked to increased consumption of alcohol, tobacco and processed foods – are also on the rise in the ranks of these countries’ burgeoning middle classes.

For instance, the American Cancer Society reported just a few months ago that Africa is witnessing an “alarming rise” in tobacco use, with the number of adult smokers expected to skyrocket “from 77 million to 572 million by 2100 if new policies are not implemented and enforced.”

Evan Blecher, director of the international tobacco control research programme at the American Cancer Society and author of the report ‘Tobacco Use in Africa’, attributes the rise to multiple factors, economic growth being a primary one.

“African economies are growing faster and more consistently now than any time in the last 50 years,” Blecher told IPS from his native Cape Town. “Economic growth and development increases tobacco use because of higher disposable incomes.

“Some of the countries where we have seen the biggest increases include Angola, the Democratic Republic of the Congo, Ethiopia, Madagascar, Mozambique, Senegal, and Nigeria – these countries are amongst the most rapidly growing countries in Africa and the world,” he added.

This ‘double burden’ – of cancers associated with both growth and poverty – threatens to cripple healthcare systems already stretched too thin.

The International Atomic Energy Agency found that low- and middle-income countries account for 85 percent of the world’s population but possess just 4,400 megavoltage machines, less than 35 percent of global radiotherapy capacity.

Keeping in mind that roughly 50 to 65 percent of all cancer patients eventually require some type of radiotherapy, the huge dearth spells bad news for developing countries. According to the IAEA, some 23 countries – most of them in Africa – with populations of over one million people do not have a single radiotherapy machine.

R. Sankaranarayanan, special advisor on cancer control at the IARC, told IPS that the cancer divide does not only separate nations at various levels of development, but also affects different populations within countries.

“The wide disparities in survival outcomes from breast and large bowel cancer between rural and urban areas in countries such as China, India, Thailand, etc. and… breast cancer survival disparities between the black and white populations in the United States… are good examples,” he said.

The latter has been widely reported in the U.S., with researchers and medical professionals lamenting the 8.8 percent gap between breast cancer-related mortality rates for black and white women.

Given that obesity is a huge problem in African American communities, affecting roughly 50 percent of all adults compared to 35 percent of white adults, it is unsurprising that African Americans experience a higher incidence of colorectal cancer, which is associated with overconsumption of unhealthy, processed foods.

In India, where over a million new cancer cases were reported in 2012 and nearly a million people died from some form of the disease, a huge diversity of lifestyles seems to account for the gaping cancer divide.

For instance, the highest incidence of cancer was recorded in the northeastern state of Mizoram, one of the fastest growing economies in India, while the lowest incidence was reported in Barshi, a rural registry in the western state of Maharashtra, where much of the population is engaged in agricultural activity.

“This has a lot to do with better pap smear screening programmes in North America that have been in existence for a long time and are of a much higher quality than in Central America, where healthcare systems are much more fragmented,” she said.