HAVANA, Mar 16 2012 (IPS) - The days of doctors, needles and uncertainty seem far-off to Elián Acosta, a Cuban boy who was diagnosed with leukaemia in 2006 and is in remission. Now the challenge is for him to be reintegrated into the community without being seen as “different.” 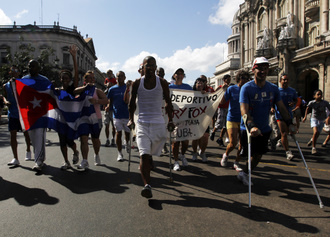 “Some people are very indiscreet and they remind him of his illness in inappropriate ways. Sometimes they even do it in front of me,” his mother, Marbelys Barrios, told IPS. Barrios, a homemaker, and her 12-year-old son live in the town of Quivicán, 21 kilometres from the Cuban capital.

The reincorporation into society of children who have had illnesses such as cancer requires a comprehensive approach. Among the Cuban population as a whole, malignant tumours were the second leading cause of death in 2010, according to the National Office of Statistics and Information.

Dr. Magda Alonso, a paediatrician who specialises in oncology, told IPS that “there is a high rate of this disease among children, especially those over four years of age.”

Contrary to what most people think, this has a significant influence on this age group’s mortality rate, said Alonso, who works at the William Soler Children’s Hospital in Havana.

Being hospitalised or requiring special care at home has an effect on childhood. “Because they had and have limitations on their physical activities with other children, they begin to isolate themselves spontaneously,” explained Prof. Alina Alerm, of Havana’s University of Medical Sciences.

Alerm was a participant in the 3rd Workshop on Quality of Life, Pain, Childhood Pain and Rehabilitation, which was held in Havana Mar. 8-9.

Elián Acosta finished his treatment four years ago, and every day he feels more like he is on a par with his friends. He is mischievous, running and jumping around outside and enjoying the Cuban countryside.

“I talk to him a lot about his illness, the consequences and the precautions that he still has to take, such as avoiding the flu, for example,” Barrios said.

The first stage of his illness was very hard for the family, when they had to make an effort to reconcile Elián’s health needs with him having contact with his friends. Different initiatives exist in the country’s hospitals to comfort children with cancer, but little is done in the community.

“Measures are urgently needed for improving social reinsertion and using other therapies, so that these children have a certain level of well-being and happiness,” Alerm commented. For that reason, workshop participants decided to look to the neighbourhoods and take a comprehensive approach towards managing childhood pain.

Proposals include group readings and concerts in the local communities, promoted by health, educational and cultural institutions and socio-cultural programmes and nongovernmental organisations. Centres such as the Rubén Martínez Villena Public Library in the capital are ideal venues for these projects.

The workshop organising committee, of the Quality of Life, Health and Happiness Department of Havana’s University of Medical Sciences, hopes to turn that particular library into a reference point for these types of activities, which foster support for childhood health and pain, said Alerm, who is also an immunologist.

Thanks to early detection and his body’s positive response, Acosta never felt pain from his illness, and he never reached the terminal stage. However, his mother remembers the suffering of her six-year-old when he had to undergo treatment and diagnostic methods. “It was inevitable,” she said.

According to Alonso, “the pain is also associated with diagnostic methods and invasive procedures to detect or treat the illness, such as lumbar punctures (when a needle is inserted into the spine to extract tissue samples or inject medicine).” But alternatives can be used to minimise the pain, she said.

In that sense, specialists from different areas associated with the workshop, such as paediatricians at the William Soler hospital, say that some myths need to be shattered among medical personnel regarding the use of drugs, anaesthetics and analgesics for children’s pain relief.

The specialists said that not suffering from pain is a human right.

However, prejudices and erroneous ideas about this problem also persist in Cuban society as a whole. “People who undergo medical procedures assume they will always have pain,” said anaesthesiologist Aymée María Menéndez. However, pharmaceuticals are available to avoid this, and to reduce pain to a tolerable level, she added.

“That is a deeply-ingrained idea. The family and society pass it on to children,” another reason why pain is “somewhat hidden and little-treated” in health services, she said. Physical distress prevents the enjoyment of normal life in society, which is necessary to keep children like Elián Acosta from feeling “different.”