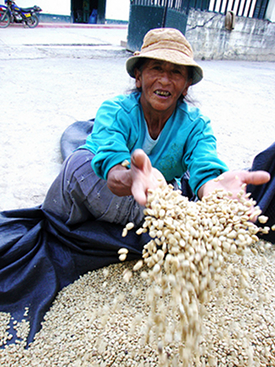 UNITED NATIONS, Nov 22 2011 (IPS) - The 925 million people who went hungry in 2010 are just one facet of an ever-worsening food security crisis. Both food producers and consumers face the consequences of price volatility and unsustainable agricultural practices – challenges that leave leaders on local and global levels alike seeking sustainable models for agriculture.

One such example is that of the agricultural cooperative, also known as a farmers’ cooperative. Farmers themselves own and control these cooperatives, which provide services, marketing or resources to their members.

Belonging to cooperatives offers “an opportunity for farmers to access markets and services that might not be available otherwise”, Brent Hueth, director of the Centre for Cooperatives at the University of Wisconsin, told IPS.

Farmers are not the only ones to benefit from agricultural co-ops. The bargaining power and resource sharing they derive from belonging to co-ops can help reduce poverty and heighten food security for millions, said the U.N. Food and Agriculture Organisation (FAO) in October.

Indeed, the United Nations threw its weight behind the idea of cooperatives as a stable business model for enterprises in many sectors, including health and finance. The international body declared 2012 the International Year of Cooperatives and launched the themed year at the end of October.

Cooperatives can be small, local businesses or multi-million-dollar entities, but they always operate based on the same seven principles, which adhere to the aim of being democratically owned and operated, with each member receiving one vote.

Eight hundred million people around the world are members of cooperatives, which employ 100 million globally. Financial cooperatives, such as credit unions, have been hailed by experts for their resilience in weathering the financial crisis.

“The new generation of food cooperatives look to create direct links with their local communities,” Luis Sierra, assistant director at the California Centre for Cooperative Development, told IPS. By shoring up individual efforts, cooperatives are ensuring that “commitments and connections to their own community are a driving force”.

In the past several years, cooperatives have helped to make supporting locally produced and marketed foods into a priority for more consumers, strengthening food supply chains and partnerships between producers, distributors and buyers, Sierra explained.

By strengthening these systems and connections, agricultural cooperatives can help with food insecurity by giving producers the opportunity to more fully “control and be able to effectively market their locally grown products”, said Sierra.

FAO, the International Fund for Agricultural Development (IFAD) and the World Food Programme (WFP) have all stressed that by being part of a larger organisation such as a cooperative, farmers are able to negotiate better terms or lower prices for necessities such as seeds or equipment.

With land degradation from both climate change and unsustainable agricultural practices, and phenomena such as land grabbing highlighting the growing need for stable agricultural models, cooperatives – where they exist – seem a feasible alternative to address such challenges.

Still, co-ops have their limits. In particular, they cannot always accumulate enough capital to develop infrastructure to, for example, take wheat and turn it into pasta or bread, said Sierra.

“The scale required to make (those processes) economical requires a tremendous amount of investment,” Sierra explained. “Sometimes there’s just not enough members, not enough capital, to make that happen.”

Hueth agreed. “Agricultural cooperatives are often at a disadvantage when it comes to raising capital for cooperative business start-up or expansion,” he said.

The same qualities for which cooperatives can often attract praise – being financed by their members, organised to operate in a way that benefits those same members rather than generates a return on investment – can also hinder those organisations.

Expanding can present obstacles for cooperatives for another reason as well, Hueth noted. “Another challenge that all cooperatives face, as they grow and become more complex, is to maintain a strong board governance structure.”

“Different economic interests among members can sometimes undermine the unity of purpose needed to run a large business successfully,” he added, and business and law schools often have “limited expertise” to help cooperatives successfully manage their businesses.