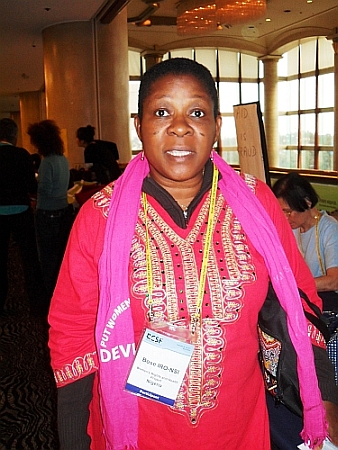 BUSAN, South Korea, Dec 1 2011 (IPS) - Gender champions have lauded the Fourth High Level Forum on Aid Effectiveness for providing gender equality and the empowerment of women a special session, but there is dissatisfaction with Thursday’s Busan outcome document.

Although the document alluded to gender equality, experts feel that the scope is narrow and does not really touch the core issues that can be catalytic to the empowerment of women.

“There has been progress since the Paris Declaration, which had no mention of gender equality. In the Accra declaration, gender equality achieved some recognition in relation to development. Today, we have moved slightly beyond Accra,” said Kate Lappin, regional coordinator of the Asia Pacific Forum on Women, Law and Development. But, she is emphatic that economic development is not a comprehensive indicator of human development.

Lappin said “women’s human rights were not integrated throughout the Busan outcome document.” Perhaps this explains why although the Busan conference coincided with two important global events on human rights, particularly in relation to gender, women’s rights did not form part of the Busan agenda.

Women account for more than half of the HIV/AIDS disease burden globally as also the burden of care, but the Busan Forum had nothing to say about how aid effectiveness can also mean life saving drugs reaching poor women.

United Nations statistics show that across the world, one in every three women has suffered some form of abuse, be it physical, emotional or sexual.

Campaigns for a world where women can be free and enjoy their rights without fear and intimidation are funds driven. It costs money to integrate Gender-Based Violence (GBV) awareness and sensitisation programmes in the health sector.

“Currently, Nigeria is still coming to terms with the brutal murder of Titi Omozojie, a young woman who is alleged to have been mutilated by her husband in a domestic quarrel,” said Iro-nsi Bose, executive director of Women’s Rights and Health Projects in Lagos, Nigeria.

“Civil society took to the streets and ensured that she was not hurriedly buried to impede proper investigation. This led to her husband being charged and is awaiting trial for murder,” Bose explained.

Prioritising the wellbeing of women is an important component of development, Bose said. “We cannot talk about real development when our women, young and old alike are butchered to death.”

Although a Joint Busan Action Plan on Gender Equality and Development is one of the outcomes of the conference, it is considered to be limited.

“The three E’s (education, employment, entrepreneurship) approach of the U.S. government was a very limited vision and disappointing – not a step forward,” said Lappin.

“It is nonetheless limited in the sense that it only looks into two outcomes: increasing the number of women in the labour force as well as improving their chances to access microfinance.

“There is no mention of, for instance, women’s labour rights. If we are to get more women into the workforce, then there are some practical needs to be put in place,” Lappin said.

Indeed, women are often at a crossroads between human production and economic production and when these two roles conflict, then they have to give up the economic venture to be able to look after the human resource.

It was expected that Busan will show a real commitment to women’s human rights as part of development effectiveness.

Bose said that “Omozojie’s untimely death is just the tip of the iceberg.

“There is still a great degree and extent of GBV across Africa. Yet, Busan offered no real commitment to champion women’s human rights as a development agenda. Instead, there was a strong focus to ensure that effective aid transforms poor countries into middle income nations.”