UNITED NATIONS, Oct 26 2011 (IPS) - When Adnan Nevic was born in Bosnia-Herzegovina back in October 1999, he was hailed as the world’s six billionth person, triggering a visit to Sarajevo by then Secretary- General Kofi Annan. 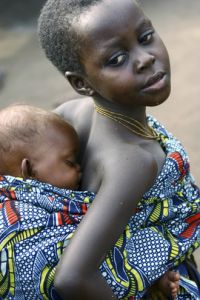 Come Oct. 31, the United Nations is predicting the world will usher in its seven billionth person in a seemingly over-crowded planet bursting at its seams.

Judging by growing population trends, the seven billionth boy or girl may well be born somewhere in Africa or possibly in Asia.

But the United Nations is not willing to stick its neck out to predict the continent in which he or she would be born – or even to identify the individual child as was done with Nevic.

Asked to be more specific about the world’s seven billionth person, U.N. spokesman Martin Nesirky told reporters Wednesday the event is much more about seven billion people as a whole, and how the world can sustain a population of that size and allow them to live in dignity.

While the rise in population is measured primarily in terms of its impact on food security, resources, reproductive health, international migration, growing unemployment and environmental sustainability, the Executive Director of the U.N. Population Fund (UNFPA) Dr. Babatunde Osotimehin looks at the growing numbers from a more positive angle.

“We are seven billion people with seven billion possibilities,” he said Wednesday during the launch of the UNFPA’s annual “State of World Population” report for 2011.

So, instead of asking questions like, “Are we too many?, we should be asking: “What can I do to make our world better?”

“What can we do to transform our growing cities into forces for sustainability?” he asked.

The UNFPA report points out that the seven billion milestone is marked by achievements, setbacks and paradoxes.

While women are on average having fewer children than they were in the 1960s, the numbers continue to rise.

And globally, says the report, pointing to another paradox, people are younger – and older – than ever before.

Secretary-General Ban Ki-moon picked up the same theme when he said last week that the seven billionth citizen will be born into a world of contradictions.

“These are all the challenges that we can and must overcome,” he said. “If we invest in people, we will reap the best dividends.”

But is the international community making the right investments, including in education and reproductive health?

Tragically, no, says Barbara Crossette, the lead reporter of the UNFPA study, and a former U.N. bureau chief for the New York Times.

“If you take the UNFPA report together with the U.N. Population Division’s 2010 upward revisions published in the spring, the question isn’t so much whether the world with its seven billion is heading to an unsustainable population level – as if this happens all by itself – but why it is that more than 17 years after the 1994 International Conference on Population and Development (in Egypt), the promises of Cairo have not benefited women in some of the poorest places, where most of this century’s people will be born?” she told IPS.

These women – who know well how high fertility affects them personally, makes it hard to educate and feed their children, strains food and water supplies and denies to national development the skills and productivity of women – simply do not have the choices women in richer nations enjoy, she said.

“More than 215 million women are estimated to want family planning, so that they can have more control of their reproductive lives and general health – hundreds of thousands die of pregnancy related causes that are largely preventable – but they have no access to contraception for numerous reasons,” said Crossette who did all of the reporting for the UNFPA study, travelling to China, India, Egypt, Ethiopia, Nigeria, Mexico, Macedonia (FYROM) and Finland.

If current fertility rates continue at expected levels, the world’s population is projected to surge past nine billion before 2050 and then reach 10.1 billion by the end of the century, according to U.N. figures.

“During my lifetime,” said Dr. Osotimehin, a former minister of health in Nigeria, “I have seen world population nearly triple. And 13 years from now, I will see another billion added to our numbers. In my grandchildren’s lifetimes, there could be as many 10 billion people in our world.”

To create a sustainable and peaceful world, he said, “We must invest wisely.”

“By investing in health and education and moving to a green economy, we can improve the well-being of people and our planet. As lives improve, population growth tends to stabilise,” he added.

Asked if the United Nations is on the right track, Crossette told IPS, “Institutionally, the U.N. and its relevant agencies have been good in their analyses and recommendations.”

But member nations and governments have not always turned these ideas into action, she added.

“It seems to me that the interaction of population and development in its broadest sense and its many facets is what needs to be considered urgently, with special focus on women and their place in every aspect of society,” said Crossette, who had done two global reporting trips for UNFPA over the last two years.

In traveling around the world this year, she said, “I met women who still want larger families, or are persuaded to have more children by partners, culture or family pressures, and that should be their choice.

“But I also met many more who say that two, three or sometimes four children would be ideal – when they may already have five or six or more, and mourn that their daughters’ lives will be no different from their daily hardship.”

Give a generation of women everywhere the attention they were promised at the Cairo conference, and the tools they need to exercise their choices and rights, and they would bring fertility down for reasons of their own, not because of national targets or population policies, which the world abandoned once and for all decades ago, she stressed.

Crossette said even China is actively rethinking its one-child policy, seeing that when women have comprehensive reproductive health care with strong family planning programmes, educational opportunities and time to engage in economic activity beneficial to their families and communities as a whole, fertility rates come down as fast and without the coercion of population control.

And Taiwan, just across the straits, achieved a lower fertility rate than China without coercion – and sooner – as did numerous other Asian nations with successful, friendly family planning programmes.

Crossette said economic growth follows as well as precedes these changes. Listening to women, and helping them, should be a high priority in years to come, starting now. They are the key to stabilising global population growth in their own self-interest, she added.