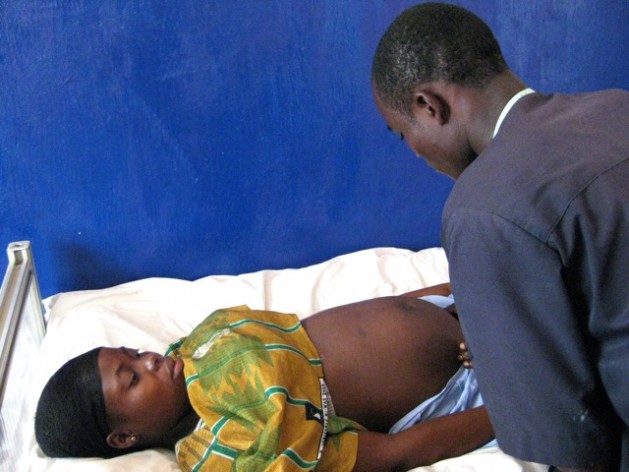 An estimated 162,000 women and girls will be buried in Africa by the end of this year. They could easily be saved if they received essential maternity services. Credit: Bonnie Allen/IPS

NAIROBI, May 25 2012 (IPS) - Three years ago, the African Union began a continent-wide campaign to reduce the number of women who die when pregnant or giving birth.

Called the Campaign for Accelerated Reduction of Maternal Mortality in Africa, its slogan is “Africa cares: no woman should die while giving life.” This was widely welcomed as many African societies give motherhood special status.

The sad truth, though, is that giving life is a leading cause of death of women and girls in Africa. And in the last 20 years, few African countries, especially those in sub-Saharan Africa, have made enough progress in bringing down the number of maternal deaths.

Data released on May 16 by the United Nations show that the number of women worldwide dying of pregnancy and childbirth-related complications has almost halved in the last 20 years. The report, Trends in Maternal Mortality: 1990 to 2010, shows that the annual number of maternal deaths dropped from more than 543,000 to 287,000, a 47 percent decline globally.

Although there was a 41 percent reduction in sub-Saharan Africa, the progress is slow and uneven. Moreover, the region accounted for more than half, 56 percent, of the world’s maternal deaths in 2010. One in 39 women in sub- Saharan Africa dies during childbirth, compared to one in 3,800 in the developed world, and one in 290 in Asia.

In the last three years, I have interviewed hundreds of women and girls in Kenya, South Africa, and South Sudan about pregnancy and childbirth. Their experiences are at the heart of why Africa is lagging far behind.

Their stories were largely similar. They told me that they had a poor knowledge of sexuality and little information and few services with regard to family planning, and that they lacked the money or transportation they needed to get help when in labour.

Their stories were about poorly staffed and ill-equipped health facilities with no capacity to handle obstetric complications, no ambulances to move women to facilities where they could be helped and no money to hire private transport.

They talked about the high cost of giving birth in a health facility, particularly when one needed specialised care. And they complained about abuse and negligence by the very health professionals who were supposed to care for them, and lack of information about mechanisms to challenge any of the barriers to quality care.

These women’s stories also reveal gross social inequalities based on economic status, ethnicity, geographic location, education, age, and immigration status, to name a few factors. These inequalities put reproductive and maternity care far out of the reach of many women, and explain why poor, illiterate, or rural women and girls are at a higher risk of dying in childbirth than more privileged women and girls.

Greater effort is urgently needed to save pregnant women. African governments need to invest in strong healthcare systems and to ensure that there are enough healthcare facilities that can provide emergency obstetric care, equitably dispense suitable drugs and supplies, and employ a sufficient number of adequately trained health professionals, including those with midwifery skills.

To avoid maternal deaths, it is also important to prevent unplanned and early pregnancies. Governments should prioritise comprehensive sexuality education so that girls and boys have accurate reproductive health knowledge to make informed choices about sex and reproduction. Governments should expand family planning information and services, including offering a wide range of contraceptive methods and access to safe abortions.

Addressing underlying social and economic inequalities that contribute to the problem is just as important. The issues include women’s low status, the lack of education for girls, early marriage, malnutrition, poverty, and harmful traditional practices such as female genital mutilation.

Although many governments explain high maternal mortality as a resource issue, it is clear that many of them could do much more with the resources they have. A simple step would be to focus on health system accountability so that the healthcare delivery failures that lead to poor maternal health outcomes could be identified and remedied through oversight and monitoring systems.

Effective accountability actually promotes financial responsibility and can ensure the most effective use of resources through constant monitoring and review of how well health services are doing their job.

As the continent celebrates Africa Day on Friday, May 25, governments should give some thought to the estimated 162,000 women and girls who will be buried by the end of this year. They could easily be saved if they received essential maternity services. If Africa truly cared about its women, it would do more to save their lives.

*Agnes Odhiambo is the researcher for women in Africa at Human Rights Watch.