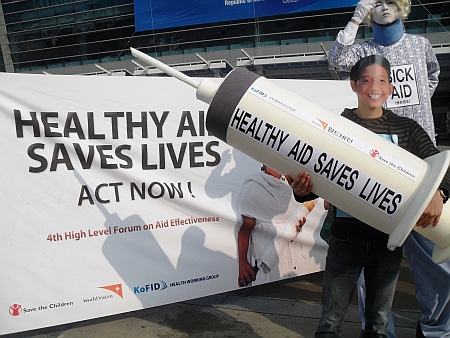 BUSAN, South Korea, Nov 29 2011 (IPS) - Although there has been considerable progress towards reducing maternal and infant mortality, millions of women and children in Africa are still in need of better health services, food and sanitation.

Some 250,000 mothers are estimated to die in Africa every year, leaving behind infants with reduced chances of making it beyond five years of age.

Statistics by Save the Children, an international non-government organisation, reveal that African countries claim nine out of ten bottom places in a worldwide maternal health ranking that involves 164 countries.

Ben Philips of Save the Children says, “These reductions are not at the rate envisaged when the Millennium Development Goals (MDGs) were launched in 2000. Eleven years later, many countries are still a long way behind the set targets.”

As a consequence of the outcry provoked by high maternal and infant deaths, the 2000 United Nations summit bound every member state to achieve the MDGs – eight development targets.

Towards this end, MDGs 4 and 5 are geared towards reducing infant mortality and improving maternal health, respectively. Consequently, these countries were mandated to reduce by two-thirds the mortality rate among children under five and reduce by three-quarters the maternal mortality ratio.

This has not happened. In fact, Philips says, “African governments need to prioritise women’s and children’s health. They also need to speed up by four times the rate at which these deaths are declining in order to achieve MDGs 4 and 5 by 2015.”

As the Fourth High Level Forum on Aid Effectiveness (HLF 4) takes shape in Busan, one question is if women and children in Africa can expect any tangible results from the conference in this South Korean port city.

According to Philips, there is little for them. “Unfortunately, the Busan Outcome document, which basically summarises the Forum’s platform for action beyond the conference, isn’t ambitious enough to improve aid effectiveness. For instance, there is no strong commitment to untie aid.”

Experts on aid in Busan say that if donors had shown a strong commitment to untie aid as an outcome of the ongoing conference, this would have increased aid by 15 to 30 percent, consequently increasing the value of aid.

And this is not the only way in which donors are letting African women and children down. Although the G-8 countries, comprising the world’s richest nations, committed to ensuring that 0.7 percent of their budget goes to aid. None of them has actualised this commitment.

Britain has, however, promised to meet this commitment by 2013.

“There’s a clear aid deficit that makes it difficult for poor countries to channel money into sector budgets towards improving health services by employing qualified nurses and even having more health facilities in areas where the poor can easily access them,” said Dan Badoo, a policy researcher.

But donors are not the only ones letting women down. Eleven years since the Abuja declaration, where African heads of states committed themselves to allocate at least 15 percent of their national budgets to lighten the disease burden that women carry, there is little to show on the ground.

According to Save the Children, only six out of 53 African Union member states have so far met this commitment. They are: Rwanda, Botswana, Niger, Malawi, Zambia and Burkina Faso.

Despite the devastating impact that genocide had on the Rwandans, the country has become a model example of prioritising the health of women and children.

Philips says, “Malawi is one of the pioneer countries devoting 15 percent of its budget to health, saving an estimated 13,000 lives.”

Say Badoo: “Against this background, the connection between aid and saving lives is clear. Aid effectiveness is about delivering social services that enable people to live decent lives and exploit their potential.”

Mothers dying while giving birth in a shanty in Old Fadama or the Jamestown slums in Accra, Ghana or Kibera slums in Kenya or Kyalisha in South Africa is a reflection that African heads of state are not taking the health of women and children seriously.

“When we say that this is the HLF 4, it all sounds so technical and elitist, but what the ordinary, poor persons really need is to experience how healthy aid can improve their lives, can give them better quality livelihoods and save dying mothers and infants,” Philips said.