UNITED NATIONS, Sep 12 2011 (IPS) - Cell phones and computer applications can help save the lives of thousands of mothers and children worldwide. 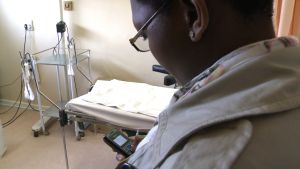 Tembli, a patient at Nolungile clinic in Khayelitsha, South Africa, receives an SMS on her mobile phone. Credit: Courtesy of United Nations Foundation

This is one of the main conclusions of “Innovating for Every Woman, Every Child”, a report by U.N. Secretary-General Ban Ki-moon’s Innovation Working Group (IWG) published Monday.

The report points to changes in health care delivery in some developing countries like India, Tanzania and Zambia. They are rooted less in development aid than in home-grown and self-sustaining solutions, including the use of communicative devices or the supply chains of large companies.

“Many of the ideas have come up from local entrepreneurs,” Dr. Tore Godal, special advisor to the Norwegian prime minister and co- author of the report, told IPS. “A large number of innovations are based on public and private sector cooperation, creating a potential for reducing maternal and child mortality.”

An example for an initiative highlighted by the report is the South African project Cell-Life. In this programme, short messages are used to remind HIV-positive mothers to keep appointments and bring infants for HIV testing or treatment.

Eight out of 10 of South Africans have access to mobile phones. Forty percent of the deaths of children under five in South Africa are due to AIDS-related illnesses – many because mothers are not able to bring their infants for treatment or drop out of programmes.

“It has made a very big difference,” she says.

A difference that can also be felt by young women like Tembli, one of Pumla’s patients. “It’s like there is a friend, someone who is there for you, who is taking care of you, who is understanding what you are going through,” Tembli says.

Another project that uses communication technology to improve health care is D-Tree. Interactive software has been installed on the mobile phones of Tanzanian front-line health workers to correctly treat malnourished children. About six percent of children in the country are malnourished and as many as 30 percent die.

Guidelines for treating acute malnutrition are complex and may need to be highly individualised. The software-equipped phones help health workers calculate correct weights and treatment and communicate these with mothers. The phones, which cost about 120 dollars a month for each health worker and 1.33 dollars for each child, provide a low- cost way to treat malnutrition.

“Mobile technology is already delivering lifesaving health information to families in remote villages where access to health workers is limited,” says Kathy Calvin, CEO of the United Nations Foundation. “It has the potential to dramatically reduce maternal and child deaths in some of the most remote places with the greatest need.”

Besides the problem of delivering health information, one of the major problems in developing countries is the distribution of treatments. About 20 percent of children die of easily treated diseases, such as diarrhea, before the age of five, even though inexpensive and effective treatments are generally available, but not accessible in rural areas.

That’s why Simon Berry, former chief executive of rural regeneration charity Rural Net UK, started the ColaLife project. The idea is simple: As the popular drink seems to be available even in the smallest towns and most isolated areas, ColaLife uses the Coca-Cola supply chain to distribute anti-diarrheal kits to these places.

“I see a great potential for international companies to scale up local projects in neighbouring countries and even on other continents,” Godal said. “Other examples are Johnson & Johnson, working with the mobile health projects both in Africa and India, and mobile phone companies.”

Even though developing countries can benefit from this type of cooperation, the risk of an unwanted influence by the private sector is still a concern. “The responsibilities for regulation of the private sector rest with the government, often facilitated by international agencies,” Godal added.

But the cooperation with existing companies or the use of modern technology is not the only innovative idea highlighted by the report. In India, the founding of a hospital named LifeSpring that allows women to give birth for less than 100 dollars can deeply affect the rates of maternal and infant mortality.

The first pilot hospital opened in 2005. Within a year, LifeSpring grew to six hospitals. It now has nine and will open another six by the end of 2011. Each hospital aims to be profitable after 18 months. LifeSpring’s staff has delivered more than 10,000 babies to date.

“We are feeling very good about this hospital,” says Saroja, the mother of Lifespring patient Swathi, who delivered a child in a hospital in Chilkalguda, Secunderabad, Andhra Pradesh, India, in an interview.

“The doctors regularly advised my daughter about the progress of the pregnancy. Also, during the delivery, the doctors took good care of my daughter. The newborn child is being regularly visited by the paediatrician. The hospital is good and neat – much better than other hospitals.”

There are two main reasons why LifeSpring can provide good medical treatment about for about one-third to one-half of the fees charged at other hospitals, Godal said: “One, because they have adopted a singular focus, and two, they have really looked into how to cut costs everywhere without losing quality.”

“Simple and cheap methods can save many lives because they can be applied to reach the poorest people that are at the highest risk of dying,” he concluded.