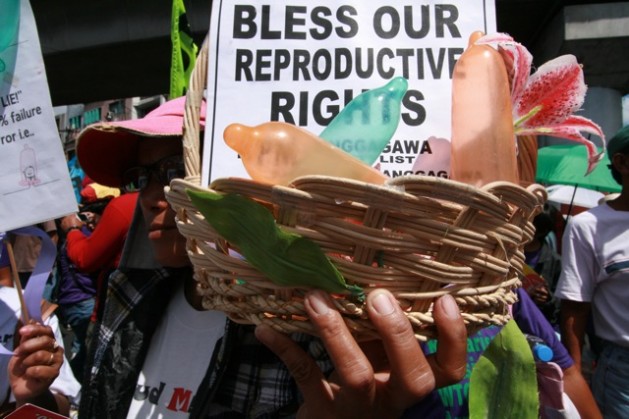 A basket of condoms passed around during International Women’s Day in Manila. Credit: Kara Santos/IPS

ISTANBUL, May 25 2012 (IPS) - While much of the world is facing a global financial crisis, made worse by government cuts in social spending, members of parliament meeting here Wednesday agreed the economic crunch is no reason for governments to relax their commitment to women’s reproductive rights and health, made 18 years ago.

Speaking at the opening session of the fifth International Parliamentarians Conference on Population and Development (ICPD), Babatunde Osotimehin, executive director of the United Nations Population Fund (UNFPA) said 250 million women around the world do not have access to much-needed family planning services.

“It is not acceptable because every life is worth more than the money that we talk about,” he told conference participants earlier this week.

“We cannot accept that, everyday, 1000 women die during child birth because we know what we have to do and we have the resources to do it.”

All that is needed is the courage to make those resources available to prevent unwanted deaths on such a massive scale, he added.

“We have what it takes to make a difference,” Osotimehin said, referring to the advances in global communications and medical science since 1994, when the world adopted the ICPD Programme of Action to empower women to claim their reproductive rights.

The conference in Turkey, which brought together nearly 300 members of parliament from 110 countries, aims at building on past commitments made in the first ICPD conference held in Cairo, Egypt in 1994.

The Programme of Action adopted nearly two decades ago set a target of reducing maternal mortality by 75 percent by 2015, complementing one of the most urgent targets of the Millennium Development Goals (MDGs).

The Parliamentarians’ conference has taken place regularly during the last ten years, bringing together MPs who are committed to population and development issues, the last one being in Addis Ababa in 2009.

According to Osotimehin, the good news is that maternal mortality has been reduced by 47 percent since 1990; still, governments are not doing enough to make reproductive health services widely available to women and young girls.

“Our work is not done,” he said, “until we are able to reach out to that little girl out there drawing water five miles away from her house, who, when she has her regular menstrual period, is sent out of the house because it is unacceptable in (her) culture to be the house.”

Thousands of girls around the world continue to be married off, at the very sight of their first menstrual cycle, to men who are old enough to be their grandfathers. Such girls are denied the opportunity to realise their full potential, Osotimehin told IPS.

Safiye Cagar, director of information and external relations at the UNFPA, said governments are not paying adequate attention to reproductive health services, which are considered “soft issues” and therefore tend to be the first on the budgetary chopping blocks, unlike roads and schools.

But as she pointed out, building infrastructure will have little impact unless it is done in tandem with building a healthy population.

“Even though funding is short, the objectives of the ICPD cannot be allowed to fall (prey) to budgetary cuts,” Cagar stressed.

“Full implementation of the Programme is not optional, it is essential, not just because of human rights but because so many other aspects of economic development hinge on its success,” she told IPS.

Therefore, one of the outcomes of this meeting will be a call for governments to allocate 10 percent of their national budgets to ICPD programmes.

However, Gita Sen, adjunct professor of global health and population at the Harvard School of Public Health, pointed out that the ICPD Programme is itself an unfinished agenda, suffering from fragmentation.

But she said family planning is still not integrated into issues like maternal mortality, and youth-specific sexual health needs are not being adequately addressed.

The best example of this fragmentation is the global HIV epidemic, which in most places is a “vertical silo sitting by itself” or, at best, running parallel to the rest of the health system.

In reality, however, HIV is as big a part of reproductive rights as anything else. If a woman contracts HIV, she could simultaneously be suffering from domestic violence, she may well have a maternity problem and, most likely, her children will be in dire need of support, according to Sen.

“So gender needs to be integrated around the woman, who (probably) has neither the time nor the capacity to go to different places to receive treatment,” Sen said.

All the different sexual and reproductive health services need to be integrated as one package, which should give priority to family planning.

As far as youth are concerned, the ICPD agenda has failed to deliver.

Despite all the talk about young people, the work being done on the ground to protect and preserve their rights is “next to nothing”, Sen said.

According to a preliminary draft Istanbul Declaration issued by conference participants, the world’s parliamentarians are determined to play their role in mobilising the necessary resources for the ICPD agenda, as well as strengthening parliamentary oversight in ensuring its implementation.

In the draft Declaration, to be finalised and adopted Friday, parliamentarians committed to looking ahead to ensure that future priorities are included in the goals and targets being developed through the Post 2015 development agenda processes.