ACCRA, Oct 26 2011 (IPS) - Mary Mingle thought she had a boil on her breast, so she bought some medication and tried to treat it at home. Two months later, bothered by persistent pain, she went to the doctor. 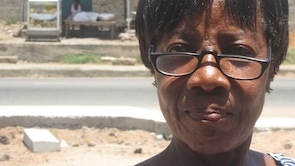 Mary Mingle has kept her double mastectomy secret for 20 years, due to fear of stigma. Credit: Paul Carlucci/IPS

There were eleven lumps in her breasts. She had first stage cancer, and her breasts, along with her uterus, would have to be removed.

“The doctor encouraged me,” she says. “The earlier I got them removed, the better. Otherwise, I would lose my life.”

Now, years after her surgery, only five people in her personal life know about her double mastectomy: her three children, her sister, and her husband. She’s been carrying her secret for about 20 years, hiding it from her extended family with a padded bra because she is afraid she will be stigmatised. She also hides it from her church, for the same reason.

“I don’t want them to be aware,” she says, her voice a tiny whisper.

Historically, breast cancer has received scant attention in this West African country. International donors and institutions have been focused on communicable diseases like malaria and HIV/AIDS. Despite the fact that, according to Ghana Health Services (GHS), non-communicable diseases are the leading causes of death.

“It’s only now that attention is being drawn to it,” says Dr. Kofi Nyarko, head of the GHS cancer control programme.

There aren’t any solid statistics yet. In the capital of Accra, the Korle Bu Teaching Hospital, one of two full service cancer facilities in the country, is building an in-hospital registry of cases. In Kumasi, the country’s second biggest city in Ashanti Region, Komfo Anokye Teaching Hospital is also working on a database.

According to Dr. Verne Vanderpuye, a clinical oncologist at Korle Bu, the hospital gets about 3,000 breast cancer referrals a year.

“The main problem is that people don’t come early,” she says. “In an untreated case, when it’s moved beyond the breast, the average lifespan is one-and-a-half to two years. It will move from the breast, to the lymphs, to the lungs, to the liver, to the bones, and to the brain.”

Nyarko says the hospitals have gathered enough information for officials to know that breast cancer is becoming more prevalent, and its victims are younger and younger.

“It’s no longer a disease for the old,” he adds.

About three years ago, a focus on non-communicable disease began to take shape. In 2008, in collaboration with the World Health Organization (WHO), the Ministry of Health set up a national Cancer Steering Committee. The following year, Nyarko became the government’s cancer chief.

Working with WHO, GHS has identified cost effective treatment and detection strategies. Radiology equipment is scarce in Ghana – there are 10 mammogram machines in the whole country, six of which are in private institutions – so there will be a focus on clinical examinations, with mammograms for follow ups. It is a strategy that will require training.

“You need human resources,” Nyarko says. “You need infrastructure. You need certain equipment in place. You need all these things and money for training. The fact that you are a doctor or you are a nurse does not mean you can examine someone and say, ‘You are free (of cancer).’ You need to be trained.”

Nyarko expects a comprehensive national strategy will be launched by the end of the year. In addition to increased clinical examinations, the government would also like to build a full service hospital in Tamale, the biggest city in Ghana’s relatively undeveloped Northern Region.

There is also a big emphasis on prevention and awareness, with a series of posters and leaflets produced in partnership with the Geneva-based Union for International Cancer Control. Aside from promoting exercise and fresh food diets, the campaign is also meant to chip away at Ghana’s cultural oppression of breast cancer victims.

“People think that cancer is a call to death, but we are telling them that cancer can be cured,” Nyarko says. “We are aware that awareness is very low, even amongst the social elite. So we are working on that.”

It is not uncommon for victims to be shunned by their husbands or families. And in a country where women do a good deal of work, both around the house and in markets, husbands are reluctant to lose their wives to months of treatment.

Furthermore, chemotherapy is not covered by health insurance and can cost almost 2,000 dollars in just two weeks.

According to the World Bank, Ghana’s 24 million people live on an average of 1,283 dollars a year. The Jubilee oil find in the country’s Western Region is expected to help push GDP growth to 13.4 per cent in 2011, but there is no guarantee that will influence the average annual income.

“There’s also the fact that you could lose your breast,” says Vanderpuye. “We have a polygamous society, whether we like it or not. They might say you are not a whole woman.”

Like many African countries, Ghana is hugely religious. Many pastors tell their flocks that cancer is a spiritual illness, and that the answer is prayer, not surgery. As a result, some women do not go to the hospital until the tumours have spread. And then they die.

“They say the surgery kills, but they wait so long that the cancer spreads, so it appears surgery kills,” says Gladys Boateng, a breast cancer survivor and the founder of Reach for Recovery.

Civil society groups like Reach for Recovery also play a role in spreading awareness. Formed after Boateng survived her own bout with breast cancer, the group has reached 3,000 sufferers in the past eight years. Survivors give back to the group, visiting women in hospitals and helping with screening missions in remote or rural areas.

But even advocates keep secrets. Boateng will not discuss her husband’s reaction to her ordeal. She just offers a tight smile and declines comment. Nyarko, who has been watching international dollars lean heavily toward infectious diseases, is predicting a continued sea change in donor awareness. He is ready – all he needs are resources.