GARISSA, Kenya, Dec 19 2011 (IPS) - The Garissa Maternal Shelter in North Eastern Province, Kenya is the only such facility in an area with the country’s highest maternal mortality rate. At 1,000 deaths per 100,000 live births, it is almost double the country’s average. 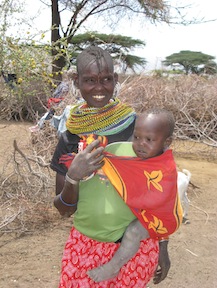 But despite this, there are only seven women here in a facility that can accommodate 24.

“The low attendance is largely due to poor awareness of the facility’s presence, ignorance, and lack of transport to the facility,” said Dr. Amal Alshabibi, the Deputy Medical Superintendent at the Garissa Provincial General Hospital, which hosts the maternal shelter.

The shelter is the only one in the province as the government is still assessing its sustainability.

According to the 2009 Kenya Demographic Health Survey, maternal mortality countrywide stands at 448 deaths per 100,000 live births. But the rate in North Eastern Province is double this.

“This rate is highly unacceptable. And the main reason is because women have little or no access to healthcare facilities due to the long distances (needed to travel), some cannot afford to pay for healthcare services and, sometimes, just because of ignorance,” said Alshabibi.

The region is also semi-arid and in some parts, arid. Many of the communities here survive only because of the food aid they receive. And many here, like Habiba Issak who has had four miscarriages, still rely on traditional birth attendants. For her four previous pregnancies, 37-year-old Issak miscarried in the care of traditional birth attendants in Mandera, some 500 kilometres from Garissa.

But when she was three months along with her fifth pregnancy, she was determined that her baby would live.

So Issak walked 50 kilometres from her village to a clinic in Mandera Township. Health experts there immediately referred her to the Garissa maternal shelter after learning her case history.

“Here we admit women who have a history of complications during pregnancy and delivery, or whose pregnancies have been described by health experts as potentially high risk, yet they cannot access a health facility near their homes,” said Alshabibi.

The shelter also admits women who have had teenage pregnancies, miscarriages, two previous Caesarean sections, a low-lying placenta, mild preeclampsia or high blood pressure, among many others.

Though this maternal shelter is unique. Unlike others in the country, it allows mothers to stay here with their children.

“These are not hospital wards. It is a home for expectant mothers who are likely to develop complications during pregnancies, or at the time of delivery,” explained Alshabibi.

“Being the only maternal shelter in the region, it serves women from hundreds of kilometres away. Yet it can only be fair if they come along with their young children because some of them have to be monitored at the facility for several months before their due date,” said Dr. Stephen Wanyee, the assistant country representative at the United Nations Populations Fund (UNFPA).

Though this facility was founded in 2007 and is supported by the Kenyan government, the U.N. agency has adopted it.

“We are taking it on as a pilot project because we have never tried it in such a community with numerous challenges. If it succeeds, then we might consider duplicating it within the region as a strategy to reduce the alarming maternal mortality rate here,” said Wanyee. Hawa Ali is one of the women living at the shelter with her children. Sitting with her four youngest children, the mother of 11 patiently waits for her turn to be examined. She is here because she is expecting triplets.

“Since this facility was established, we have never lost a client or an infant,” Hamadi Muhumed, the deputy nursing officer at Garissa Hospital, said reassuringly.

“Through close monitoring by fellow health experts, all women who have passed through here have always gone back home smiling with their babies,” he said. He remembers a woman who was admitted to the shelter a year ago after she had 12 miscarriages because of cervical complications.

“But when she came to the facility, she was monitored until she gave birth to a baby boy, whom she named after Gullet Yusuf, the medical doctor who supervised her before and during delivery,” Muhumed said.

Sadia Abdirahaman has had three miscarriages but described it as a “dream come true” when she delivered a healthy baby girl here.

“Though this region is sparsely populated, there is definitely a need for maternal shelters in other areas like Awjir and Mandera so that people do not have to travel several kilometres in order to access this particular one,” said Muhumed.