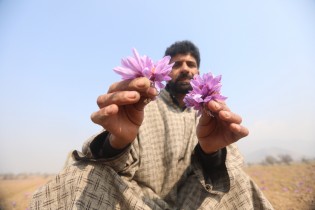 By Peerzada Ummer
Walking in the middle of fields of delicately-scented purple saffron crocus flowers, 36-year-old Mubeen Yasin, a saffron farmer from the southern region of Indian Kashmir, is not optimistic that in a few years time the scenery will remain as beautiful as it is today.

By Athar Parvaiz
Leaning on her daughter’s arm in the post-operative ward of a hospital in Srinagar, capital of the northern Indian state of Jammu and Kashmir, Raja Begam views the anti-infection pill she is being offered with a large dose of suspicion.

By Athar Parvaiz
Bashir Ahmad Malik was flabbergasted when a helicopter carrying an Indian official from Kashmir’s summer capital of Srinagar landed in his resident Drang village, just 17 miles away from its point of departure.