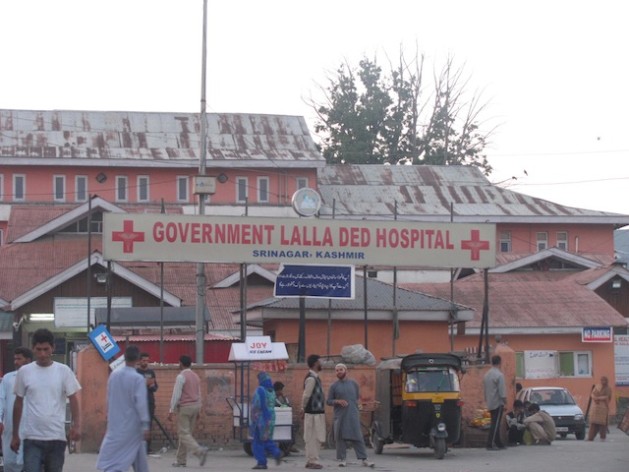 Government hospitals in Kashmir are mostly visited by the poor. Credit: Athar Parvaiz/IPS

SRINAGAR, India, Jun 5 2013 (IPS) - Leaning on her daughter’s arm in the post-operative ward of a hospital in Srinagar, capital of the northern Indian state of Jammu and Kashmir, Raja Begam views the anti-infection pill she is being offered with a large dose of suspicion.

“How can I be sure it will relieve my suffering?” the 49-year-old asked. Begam has just had her gall bladder removed and is giving her attendants a tough time, insisting, “Everyone says we are being fed fake drugs in Kashmir.”

She is referring to the fake drugs scandal in the state, which erupted this April after samples of the antibiotic Maximizine-625, subjected to a random quality check by the state drug controller, were found to be spurious.

Tested samples of the drug, which is supposed to contain 500 mg of amoxicillin trihydrate and 125 mg of clavulanic acid, turned out to be completely devoid of the former. Yet 200,000 of these tablets were in circulation in numerous government hospitals.

While the media hype during the early days of the scandal quickly died down, the long-lasting effects of such a scam can still be seen in hospitals across the state, where patients like Begam have become cautious to the point of paranoia.

“Every time she needs to take her medicines, we have to cajole her to do so,” Begam’s daughter, sitting beside her mother’s hospital bed, told IPS.

It is not as though scandals are anything new to Jammu and Kashmir, which has waged a long battle with militancy and oppression by Indian armed forces. More than 800 cases of corruption against politicians and bureaucrats are registered with the State Vigilance Commission and the crime branch of the Jammu and Kashmir police department.

Civil society, however, is infuriated over the current drug scandal because it involves human lives. “This is not about amassing wealth through corrupt means but about playing with human lives for making money,” Shakeel Qalandar, who organised a protest against the scandal early in May, told IPS.

Symptoms of a disorder within the health system here have been apparent for a while.

The state’s only childcare facility, the G.B. Pant Hospital in Srinagar, recorded 3,800 deaths between 2008 and mid-2012. Early this year, reports surfaced that 636 infants died in the hospital in the first half of 2012. The shortage of ventilators and other basic equipment mandatory for a childcare hospital was offered as a possible reason.

Another recent report by the Comptroller and Auditor General of India observed that between 2007 and 2012, there were as many as 12,860 deaths in Srinagar’s lone tertiary-care hospital, the Sher-e-Kashmir Institute of Medical Sciences (SKIMS). Of these, 7,875 people had died within 48 hours of their admission to the hospital, the report added.

Even as recently as May 29, ampicillin injections as well as emergency medicines supplied to patients at the Chest Diseases Hospital in Srinagar came under the scanner when, instead of showing signs of recovery, patients began developing various side-effects after the drugs were administered.

However, no one had connected the dots so far, till the scam blew up in their faces.

The annual consumption of drugs in Jammu and Kashmir is worth 75 million dollars, according to the Jammu-based Drug and Food Control Organisation. A good percentage of these drugs have routinely turned out to be suspect in random samplings by the laboratories of the drug control department. These findings have, however, never been made public.

Of the 2,000-odd samples collected in this latest round of inspection, at least 51 were found to be substandard. An official of the department admitted as much to IPS, but only after an assurance that he would not be named.

The Jammu-based Life Line Pharmaco Surgicals supplied the drug, on the strength of an authorisation certificate allegedly from Medley Pharmaceuticals Ltd, a Mumbai-based manufacturer of bulk drugs, which has been approved by the Jammu and Kashmir government to supply drugs to its hospitals.

It later transpired that Affy Parenterals, an outfit based in the state of Himachal Pradesh with which Jammu and Kashmir shares its border in the south, had actually manufactured the drug.

Once in Jammu and Kashmir, the suspect drugs entered the state hospitals through a complex network of wholesale dealers and retailers. It is another sad commentary on the system that of the 4,100 drug stores in Kashmir, over 1,200 operate without licences, the official in the drug control department told IPS.

“And most of those who do have licences have got them after paying bribes,” he added.

As early as 2008, a report by the Associated Chambers of Commerce and Industry of India (ASSOCHAM), the country’s apex trade body, had stated that while most of the fake and substandard drug establishments worked out of the northern Indian states of Punjab, Haryana and Uttar Pradesh, the fake drug supply was fed particularly to Jammu and Kashmir, a state located in the country’s northern extremity.

So perturbed are the state’s people that even two months down the line, protests continue.

Members of civil society have staged demonstrations, while the Doctors Association of Kashmir (DAK) demanded that the former health minister of the state, Sham Lal, believed to be close to Life Line Pharmaco’s owner Ashok Kumar, be arrested.

He and the present director of the drug control department, activists say, are directly involved in the scam. They are alleged to have facilitated the entry of fake drugs by ignoring standard norms.

Given the scale of the public anger and the repeated call for strikes, the state government was forced to hand over the investigation to the crime branch. Jammu and Kashmir Chief Minister Omar Abdullah said that he had asked the State Vigilance Commission to probe the scandal as well.

But DAK has also filed a petition in the state high court, which directed the crime branch to carry out an objective investigation and issued summons to the former health minister and the other accused. No arrests have been made so far, although warrants have been issued against 15 people of the suspect companies.

Civil society is far from pacified by the promises of official inquiries. They are adamant on an independent probe.

“The investigation should be carried out by some reputed international agency, like Amnesty International, because the scandal amounts to attempted genocide,” Hameeda Nayeem, chairperson of the Kashmir Centre for Social and Development Studies (KCSDS), told IPS.

“What the government is doing is an eye-wash,” said DAK president Dr Nissar-ul-Hassan. “We demand that all the drugs being used in Kashmir be subjected to a quality check,” he told IPS.

The drug scandal comes as another blow to the already dismal healthcare scenario in the state. Lack of space, infrastructure and equipment are crippling, while low staff strength leans even heavier on the system.

The affluent class in Kashmir can afford to seek treatment outside the state. The poor, however, have no recourse but to rely on the public healthcare system in the state. Prayers appear to be the only palliative now that the system itself has taken ill.