SRINAGAR, Feb 7 2012 (IPS) - Maheen was nine years old when she witnessed the death of her elder brother. At the age of 10 she saw the dead body of her neighbour, killed in the crossfire between Kashmiri rebels and Indian security forces, his guts spilled out on the road. 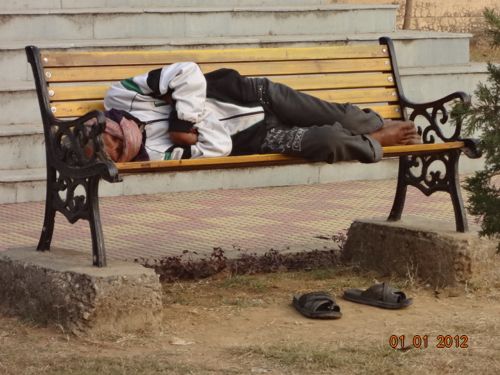 The incidents left Maheen restless, irritable and insomniac, for which she was prescribed five miligrammes of Valium by a local physician. But even in her sleep she was haunted by the horror she had witnessed.

Just two months later, Maheen witnessed a bomb blast that killed five people before her eyes. Her situation worsened when she lost her father to cardiac arrest and witnessed the death of a cousin, who was also caught in the crossfire between the warring sides.

Maheen started experiencing serious panic attacks, would sometimes become unconscious and often relive the events that had led to her distress.

Soon, doctors at the Psychiatric Diseases Hospital of Srinagar had diagnosed Maheen for severe post- traumatic stress disorder (PTSD) at the age of 15.

Though Maheen, now 26, is still under medication, her doctor says she often feels sad and breaks down into tears unexpectedly. He concludes that the events in her childhood and early adulthood are deeply etched into her mind.

Maheen is not alone in her plight. Twenty-three years of conflict have led to the unprecedented growth of psychiatric disorders in the region, particularly anxiety disorder, panic disorder, sleep disorder, depression, obsessive-compulsive disorder (OCD) and, most commonly, PTSD, which has impacted thousands of people in the region.

In October 2011, a study conducted at Sher-e-Kashmir Institute of Medical Sciences (SKIMS) revealed that 55 percent of Kashmir’s population suffers from various kinds of mental disorders.

Based on his patient population study, psychiatrist Mushtaq Margoob says that 58 percent of the population has been through some kind of mental trauma, leaving more than 800,000 Valley-dwellers suffering from PTSD.

The number of patients attending Kashmir’s sole mental health hospital has increased from 1200 in 1989 to 100,000 in 2011. The Out Patients Department of Psychiatry at Shri Maharaja Hari Singh hospital in Srinagar, which was founded in 2008, receives an average of 150-200 patients a day, most of them young boys and girls.

Although no comprehensive study on children’s mental health has been conducted in Kashmir, Hussain believes, “The conflict has undoubtedly given rise to (an unprecedented rate of) psychiatric disorders among children in Kashmir,” with PTSD being most prevalent.

Hussain described a four-year-old girl who went “completely numb for months after witnessing a gun battle between troops and militants in her own house.”

“The effect of witnessing a bomb blast or seeing a dead body is much more (taxing) on children than on adults,” he continued. “Adults have (the capacity) to reason it out – children don’t.”

The problem is particularly grave amongst children living in orphanages, which, doctors say, are breeding grounds for psychiatric disorders.

A research report on the prevalence of disorders among children in Kashmir’s orphanages, undertaken by a host of local medical practitioners, found that 40.62 percent of all orphans between 5- 12 years suffer from PTSD, followed by major depressive disorder (MDD), which has been diagnosed in 25 percent of all orphans.

Conversion disorder is present in 12.5 percent of orphaned children, panic disorder in 9.38 percent, attention deficit hyperkinetic disorder (ADHD) in 6.25 percent and seizure disorder in 6.2 percent. Margoob, who collaborated on the study, explained that orphanages only provide children with their basic physical needs like food, clothing and shelter, while neglecting their psychological and emotional health.

“If a particular child is good at painting or sports, their talent remains unexplored, thereby negatively affecting the child’s mental and intellectual development,” Margoob added.

Like children, the female population has been severely affected by violence and bloodshed in the region.

Records from the Psychiatric Diseases Hospital reveal that 15 percent of women are suffering from prolonged trauma and stress manifesting in symptoms such as frequent palpitations, lack of interest or motivation, sleep disorders and appetite loss.

A full 70-80 percent of all cases of acute depression are women, 16 percent of whom have PTSD. Many of these women are either widows or the wives of disappeared husbands – referred to in the region as ‘half widows’ – who are commonly diagnosed with anxiety, stress, irrational fear, depression, PTSD and various phobias.

Despite the growing incidence of mental disorders, Kashmir has only one official institution dedicated to psychiatric care, located in Srinagar. Two local general hospitals are equipped with an ‘out patients department’ for psychiatry. No facilities are available at district level. People from far flung areas are forced to travel to Srinagar for treatment.

Not a single department capable of tackling the issue of child psychiatry exists in the region.

Sociologist point out that conflict has cast a dark shroud over Kashmir under which scores of people suffer from severe depression, tension, suicidal tendencies and, often, extreme isolation and loneliness.

Mental disorders have also taken their toll on society as a whole, straining everything from familial relationships to student-teacher dynamics, said B. A. Dabla, a sociologist at the University of Kashmir.

Besides a lack of facilities, he told IPS, social taboos restrict people from seeking treatment for their conditions.