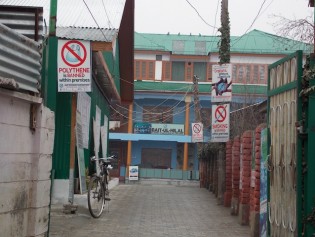 By Sana Altaf
Rashid was 12 years old when he picked up a gun and received armed training in Pakistan. He was caught by the Indian forces in 1992 and sentenced to two years’ imprisonment. Five years later when he wished to return to a normal life, everyone turned away from him.

By Sana Altaf
Four years after three middle-aged men were murdered in cold blood in central Kashmir, their case lies forgotten, collecting dust in the court’s record room, while culprits roam free. Meanwhile, a young woman named Afroza recently lost a two-year battle to get her rapist punished, when her neighbour gave false evidence in court, thus facilitating the acquittal of the accused.

By Sana Altaf
While the Jammu and Kashmir Cricket Association is hogging headlines over the alleged embezzlement of sports funds, Kashmiri youth are gearing up to write history in Kashmir’s cricket record.

By Sana Altaf
On Feb. 6, a young girl committed suicide by swallowing poison at her home in Kashmir. A few weeks later a teenaged girl from Srinagar hung herself at her residence.

By Sana Altaf
On Feb. 6, a young girl committed suicide by swallowing poison at her home in Kashmir. A few weeks later a teenaged girl from Srinagar hung herself at her residence.

By Sana Altaf
Drug abuse, known to be widespread among youth in India’s northern Kashmir state, is now showing a new trend whereby teenage girls and women are increasingly turning into substance abusers and addicts.

Maheen was nine years old when she witnessed the death of her elder brother. At the age of 10 she saw the dead body of her neighbour, killed in the crossfire between Kashmiri rebels and Indian security forces, his guts spilled out on the road.

INDIA: ‘Rape’ Stands in the Way of Love

By Sana Altaf
A few days after his wedding in 2008, Imran* was thrown behind bars in Srinagar’s central jail for the alleged abduction and rape of his wife Shafeen. Shafeen denied the charge against her newlywed husband. It was her parents, furious that the couple married against their wishes, who ensured that the young bridegroom languished in prison for two years, until he was bailed out in 2010.

By Sana Altaf
Increased education and employment opportunities for women in Kashmir might have brought monetary independence and a degree of empowerment but it also has women ensnared in a vicious trap of domestic violence.

KASHMIR: Saffron and Silk Wither in the Valley

By Sana Altaf
The saffron and silk industries in Kashmir have been dying a silent death over the last decade, with production rates for both commodities witnessing up to 50 percent declines in some areas of the Kashmir Valley.

By Sana Altaf
Fourteen-year-old Shafat Ahmad works as a domestic helper in the house of a Srinagar-based government employee in Kashmir. His younger sister embroiders shawls in an unregistered textile venture in her native village of Beeru.

By Sana Altaf
"Is Afzal Guru really the person that so many Indians supposedly want dead? Or are they taking out their frustrations on an easy target?" asked Human Rights Watch, referring to the death sentence handed down to the Kashmiri man who was convicted of conspiracy in the 2001 suicide attack on the Indian Parliament.

INDIA: Kashmir Gets a Grip on AIDS

By Sana Altaf
When the sole Community Care Centre in Jammu and Kashmir providing medical and psychosocial services to people living with HIV/AIDS (PLWHA) closed down for lack of patients it was a sure sign that the north Indian state had beaten back dire forecasts.

RIGHTS-INDIA: ‘Juveniles Get No Justice in Kashmir’

By Sana Altaf
Kashmir’s juvenile justice system is sorely deficient for a state ridden with a long, and often violent, separatist conflict that attracts youth, say lawyers and rights activists.

By Sana Altaf
If films are the voice of society, then Indian Kashmir is mute, with a virtually non-existent film industry and the subsequent inability to nurture local talent.

INDIA: With No IT Sector, Kashmir Lags Behind

By Sana Altaf
At a time when information technology has revolutionised life across the globe, Kashmir in north India lags behind the rest of the country, and the world, because it has no IT industry to speak of.

By Sana Altaf
Thousands of people have died in 20 years of turmoil in Kashmir in northern India, but the conflict seems to have spared the animal population, particularly the severely endangered Kashmir stag or "hangul" whose population has grown in recent years.
ADVERTISEMENT ADVERTISEMENT