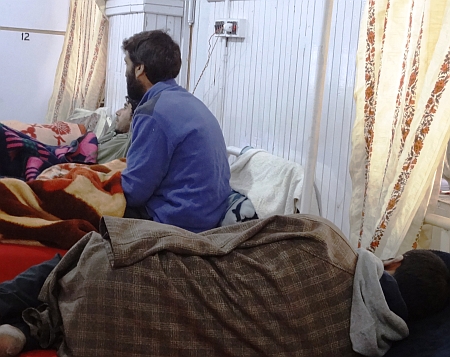 At the police de-addiction centre in Srinagar. Credit: Sana Altaf/IPS

That young women and college-going girls are abusing substances, especially toluene, a common thinner, is testified to by officials at the de-addiction centre run by the police control room in Srinagar.

“The abuse of toluene is getting very common in Kashmir because it is easily available,” says Dr. Areeb Malik at the police de-addiction centre here.

“Getting other drugs is a bit more difficult for girls than buying ink remover or polish,” said Malik, adding that females as young as 13 years have been found involved.

Female addicts may seek consultation at the centre, but are then left to their own devices. “We prescribe medicines to female addicts but they are never kept under complete supervision which is most important for de-addiction,” said Malik.

Typically, female drug addicts do not come back after the first consultation. “The doctors are always uncertain if they are following prescriptions or whether they have given up drugs,” says Malik.

Besides lack of facilities, social stigma restricts women from seeking rehabilitation or treatment.

“Keeping in view the social stigma which female drug addicts face, it is important to set up a de-addiction centre for them,” said Sameena (name changed), a 22-year-old college student and former drug addict.

Sameena said she began with glue sniffing “for fun” during her school days and then moved on to opiates. Fear of social stigma and lack of facilities forced her parents to take her outside Kashmir for treatment. Sameena has been under medication for 11 months now.

Mohsin Ali, an official at the stress management cell of the police de-addiction centre, set up in February 2011, said 298 calls were received from drug addicts until November 2011, including 11 from females.

“We once received a call from a teenage girl who said she, along with 18 of her female friends, wanted to quit drugs. But, we never heard from them after that,” Ali told IPS.

Yasir Ahmad, a social worker at the centre, said there was a need for de-addiction centres devoted to treating both males and females. “There was a time when Kashmir had one addict from each district but now there are more than one in a single family.”

The state health department does not gather or maintain data on the status of drug addiction in Kashmir, adding to the worries.

“The direct impact of addiction is social disintegration. It splits families, friends’ circles and subsequently society. It is commonly known that addicts live in isolation,” said A.G. Madhosh, psychologist and former professor at the University of Kashmir.

Madhosh said youth on drugs may physically live in the same house with their families, but live alone emotionally. “They do not care about what happens to their near ones and these insensitivities extend towards society.”

“Additionally, their poor performance in education or at work is burdensome to society. We can easily imagine the fate of a society with a large number of addicts,” Madhosh said.

The problem of drug abuse in Kashmir was highlighted by the United Nations International Drug Control Programme survey in 2008 which showed that there were more than 70,000 drug addicts in Kashmir, 4,000 of them women.

That survey also revealed that 65 to 70 percent of the student community in Kashmir was into drugs and that 26 percent of female students were involved in drug abuse. More than 70 percent of addicts fall in the 18-35 age-group.

Leading psychiatrist Dr. Mushtaq Margoob in his study, ‘The Menace of Drug Abuse in Kashmir’, conducted in 2008, found that more than 200,000 people in the Kashmir valley which has a population of four million people were on opiates.

Margoob’s study, made public in 2009, is currently the only authentic report available regarding drug abuse in Kashmir. No survey has since been undertaken in the state.