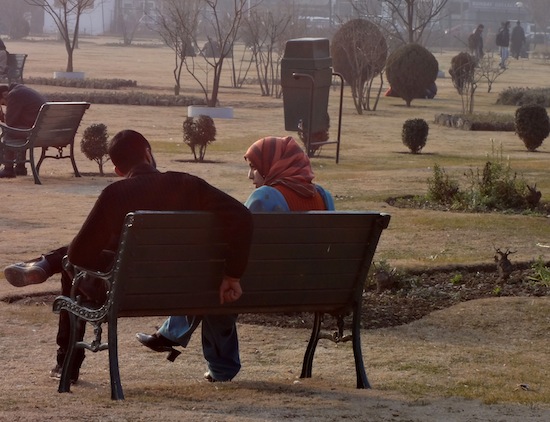 Suicide rates, particularly among teenagers, have soared in Kashmir since the insurrection began in 1989. Credit: Sana Altaf/IPS

SRINAGAR, Mar 2 2012 (IPS) - On Feb. 6, a young girl committed suicide by swallowing poison at her home in Kashmir. A few weeks later a teenaged girl from Srinagar hung herself at her residence.

On Feb. 24, two girls from the Budgam district committed suicide by consuming poisonous substances. A few days later, on Feb. 28, a youth ended his life by jumping into the Jhelum River in the Sopore district of North Kashmir on the same day that a 40-year-old man killed himself.

Feb. 29 saw the death, by poison, of another teenaged girl in the same area.

In the month of February alone, over 10 suicide attempts were reported in the Valley, giving just a glimpse of the roughly 17,000 suicides that have been reported in the past 21 years, experts say.

Research on suicides conducted by B.A. Dabla, a sociologist at the University of Kashmir, indicates that an average of 227 suicides have been reported in 27 months in Kashmir, based on medical reports.

The study, which is yet to be made public, says that 62 percent of all suicide cases involve females. Youth in the age group of 17-26 are found most likely to take their own lives, though teenagers as young as 13 years old have also committed suicide over the last two decades.

Suicide rates in Kashmir were negligible before insurgency hit in 1989. The past 21 years of conflict have seen a sudden surge in suicides, with researchers at Kashmir’s sole Psychiatric Disease Hospital indicating an increase from 0.5 deaths per 100,000 people in 1989 to 20 deaths per 100,000 in 2007.

The National Crime Bureau Records (NCBR) of India states that Kashmir has a higher suicide rate than the Indian states of Uttar Pradesh and Bihar, since one person in the Valley commits suicide every day.

In 2011, over 1000 suicides cases were registered with SKIMS and the Shri Maharaja Hari Singh (SMHS) hospital of Srinagar.

However, experts believe these numbers are conservative estimates, since media reports and police and hospital records do not present the real scenario of just how rampant suicide has become in Kashmir.

“The actual rate is higher than what is being reported. Because of the social stigma (and shame attached to the act), people do not report suicide attempts or death,” psychiatrist Mushtaq Margoob told IPS.

“It is an unfortunate fact that the suicide rate is higher than what we know and (steadily) mounting,” Margoob said.

Along with the increase has come more “efficient” ways of committing suicide.

Earlier, Dabla said, people would threaten their families with suicide, without actually doing themselves any harm. They would jump out of first floor windows or slash their hands – adopting measures that, though harmful, still left them alive.

“But now, the most deadly substances are being used for suicides.”

In urban areas, hanging, jumping into rivers and consuming poison are some of the most common methods. In villages pesticides are often used. Women commonly set themselves ablaze during suicide attempts.

There are many reasons for this surging rate; besides conflict, the level of life-or-death desperation in the Valley has been linked to the drastic rise of psychiatric disorders, which currently affects roughly 800,000 people across Kashmir.

“Impulse control disorders, psychiatric disorders, materialist lifestyles, psycho-social and socio- economic problems are some of the major causes for the increase,” said Mushtaq.

Depression, panic disorder and anxiety are all linked to suicides as well.

Independent psychologist A.G. Madhosh categorises the causes of suicides in Kashmir into social, psychological and anticipatory.

“When students commit suicide after appearing for an examination, it is an ‘anticipatory’ cause,” she explained.

Amongst teenagers, poor impulse control, examination stress, love affairs and parental pressures are found to be prominent reasons for suicides. Experts suggest adoption of a practical system of education, counseling and religious education for preventing suicides.

The study shows that 38.56 percent of Indian forces are schizophrenic, 14.17 percent suffer from alcoholism and 9.8 per cent are struggling with depression.

Tremendous psychological stress, loneliness, short leaves and hostile conditions are stated to be major reasons for the rise in suicides amongst troops.