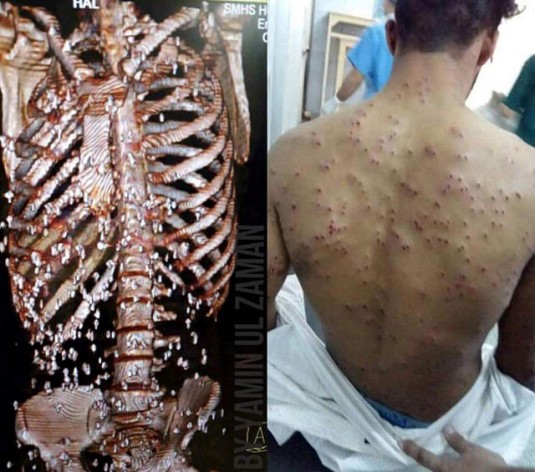 X-ray of a pellet victim injured during the current protests in Kashmir. Credit: Umar Shah/IPS

Sixteen-year-old Kaisar Ahmad Mir has been in hospital since July 9. As X-ray films dangle near his bed, Kaisar stares with haggard eyes at each passerby. Doctors had to amputate three fingers on his right hand after pellets were fired at him from close range during one of the demonstrations.

“After the autopsy was done, there were 360 pellets found in [my brother's] body.” -- Shakeel Ahmad

“I felt some electric current when the pellets hit my right hand. Then the blood started oozing out, followed by intense pain,” Mir told IPS.

Deadly clashes between protestors and government forces engulfed this Himalayan region –  India’s only Muslim majority state – on July 8, a day when the army gunned down militant leader Burhan Wani during a three-hour gun battle in the remote south Kashmir region of the state.

The government quickly instituted a curfew across the Kashmir valley, severing internet and phone service. But people defied government restrictions and came out in hordes to protest in cities, towns and remote hamlets of the state. Since July 8, 52 protesters have been killed and more than 2,500 injured, around 600 of them due to pellets. Many of the victims are children. 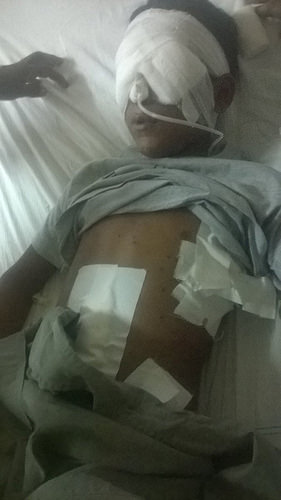 Eleven-year-old Umar Nazir received more than 12 pellets in his face that damaged his both eyes. He was shot during anti-government protests in the Indian state of Kashmir. Credit: Umar Shah/IPS

The pellets are loaded with lead and once fired they disperse widely and in huge numbers. Pellets penetrate the skin and soft tissues, with eyes especially vulnerable to severe, irreversible damage.

Pellets were introduced in Kashmir as a “non-lethal” alternative to bullets after security forces killed nearly 200 people during demonstrations against Indian rule from 2008 to 2010.The state government’s reasoning was that when fired from a distance, shotgun pellets disperse and inflict only minor injuries.

During this summer’s protests, pellets were extensively used against the protesters, injuring hundreds. According to figures issued by Kashmir’s SHMS hospital, out of 164 cases of severe pellet injuries, 106 surgeries were performed in which five people lost one eye completely.

Among those who lost their eyesight due to pellets is 11-year-old Umar Nazir. Umar received more than 12 pellets in his face that damaged both eyes. As he lost vision in his right eye, doctors attending him have told his family that Umar’s left eye is also deteriorating due to a severe injury to the optic nerve.

Human rights groups criticize the heavy-handed approach to dealing with the protest demonstrations, and contest the government’s claims that pellet guns are “non-lethal”.

Riyaz Ahmad Shah, 21, was killed on Aug. 2 after being hit by pellets.  An ATM security guard, Shah was returning home when, according to his family, state forces fired pellets at him from close range, killing him on the spot.

“After the autopsy was done, there were 360 pellets found in his body,” said Shakeel Ahmad, Riyaz Shah’s brother.

According to Al Jazeera, at least nine people have been killed in the region since pellet guns were introduced in 2010.

“Pellets are not being used against rioters in other parts of the country, but here in Kashmir they are being used quite openly without any remorse from the government,” said human rights activist Khurram Parvez, who is also a program coordinator of the Jammu and Kashmir Coalition of Civil Society.

To protest against the use of pellets, the coalition has created posters with text written in braille to make the world aware of the suffering in Kashmir. “When you don’t see eye to eye with the brutal occupation in Kashmir, this is how they make you see their point,” reads a campaign poster.

Sajad Ahmad, a doctor treating pellet victims in Kashmir, said he had never seen such a “brutal use of force upon people in the past.” He added that while pellets may not kill most victims, they can still be left disabled for life.

“We have done hundreds of surgeries since July 8 and there are children who were crippled and can no longer work or earn,” Ahmad said. 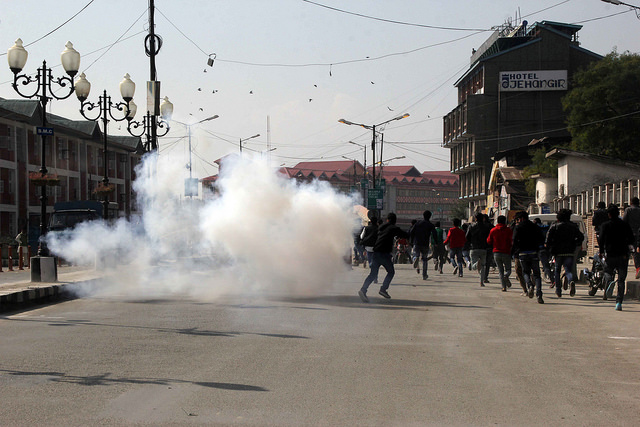 Since July 8, 2016, 52 protesters have been killed in Kashmir and more than 2,500 injured, around 600 of them due to pellets fired by security forces. Many of the victims are children. Credit: Umar Shah/IPS

“Pellet guns are inherently inaccurate and indiscriminate, and have no place in law enforcement,” Zahoor Wani, a senior campaigner with Amnesty International India, said in a statement issued in New Delhi.

“Amnesty International India calls on the Jammu and Kashmir government to immediately stop the use of pellet guns in policing protests. They cannot ensure well-targeted shots and risk causing serious injury, including to bystanders or other protesters not engaging in violence. These risks are almost impossible to control.”

Kashmir’s High Court has issued notices to the state government and the national government of India seeking a response over litigation demanding a ban on pellet guns used by security personnel to deal with protests in Kashmir.

The state government says it is working to find alternatives to the pellet guns to quell the violent protests.

“We disapprove of it… but we will have to persist with this necessary evil till we find a non-lethal alternative,” J&K government spokesperson Nayeem Akhtar said.

Many people in Kashmir want an end to Indian rule and either full independence or a merger with Pakistan, which also claims the territory.

At least 50,000 have died in an insurgency that began in 1987. Over the years, anti-government rallies have occurred frequently, raising tensions between security forces and civilians, which have led to accusations of police heavy-handedness in trying to impose order.