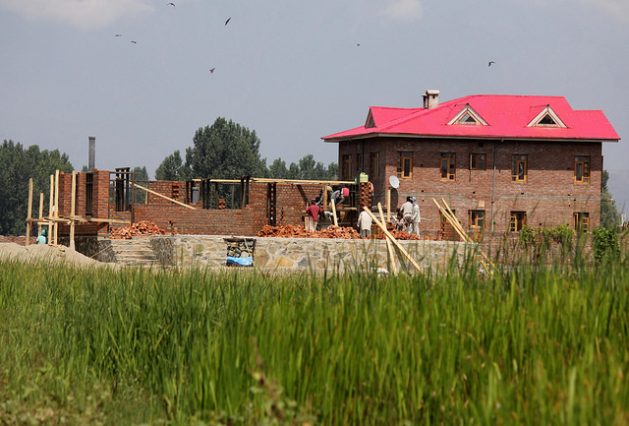 New construction goes on unabated in central Kashmir’s Shalteng area where people have given up farming and are selling their lands for development. Credit: Umer Asif/IPS

SRINAGAR, India, Oct 29 2017 (IPS) - In central Kashmir’s Ganderbal district, 40-year-old Javaid Ahmad Hurra remembers vividly how his small hamlet used to be lush and green when he was a child. It is now subtly turning into a concrete jungle, with cement structures dominating the scenery.

Walking past new houses under construction, Javaid says the entire place was once filled with vast paddy fields. “Now, residential colonies have been built and no one is sowing crops anymore,” he told IPS.

"The easiest way to earn money for the farming community in Kashmir is to sell land or convert it into a concrete commercial structure.” --Ghulam Nabi Dar

Javaid is not alone in witnessing ruthless urbanisation in places that used to be the agricultural hubs of India’s northern state, Jammu and Kashmir. According to the state policy document on land use, due to rapid urbanisation and unplanned land use, the landlocked Kashmir Valley is losing a majority of its cultivable lands.

The December 2016 report says that every year, the Kashmir Valley is losing an average of 1,375 hectares of agricultural land due to rapid construction of commercial infrastructure, brick kilns, residential colonies and shopping complexes.

Kashmir is a hilly state and its net area (in the Indian part) is 101,387 sq kms. Its population per the 2011 census is 12.5 million. The forest cover of the state is 20 percent of its total geographical area and the density is 124 people per sq km.

Agriculture plays a prominent role in the economy of this Himalayan region, with around 70 percent of its total population living in rural areas, and who are directly or indirectly dependent on agriculture for their livelihoods.

According to Mir Yasir Ahmad, a researcher at the University of Kashmir, the shrinking of agricultural land can be attributed to rapid urbanisation and the unplanned emergence of residential colonies in paddy fields.

“The government isn’t taking any serious measures to preserve the agricultural lands here, due to which the concrete structures are coming up places that used to be vast paddy fields some 10 or 20 years ago,” Ahmad told IPS.

According to the state’s 2016 economic survey, the local production of food grains has not keep pace with demand, and yields of principal crops like rice, maize, and wheat have not grown over the years.

“Moreover, the scope for increasing net area sown is very limited and landholding is shrinking due to a continuous breakdown of the joint family system, growing urbanization and population explosion,” it says.

It concludes by warning that the state is facing a deficit in agricultural production and food grains are being imported from other regions of India. 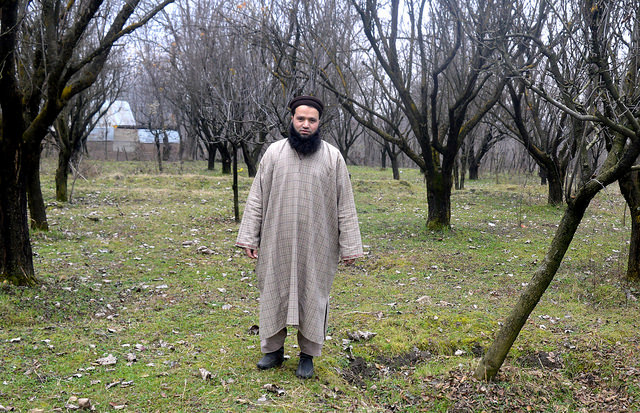 Yasir Ahmad says the situation on the ground is even worse than the government reports describe. He says independent surveys have revealed that the net area sown in Kashmir at present is a mere 7 percent, and the cultivable land in the state has shrunk to 30 percent.

Ghulam Nabi Dar, a farmer from North Kashmir’s Baramulla, told IPS that the basic reason for the shrinking of the agricultural lands in the valley is the desperation of farmers.

“There is no market for the rice crops in Kashmir and the government isn’t providing the irrigation facilities as it should to the farmers. The easiest way to earn money for the farming community in Kashmir is to sell land or convert it into a concrete commercial structure,” Dar said.

According to a recent survey conducted this year by the University of Agricultural Sciences, urbanisation and rapid construction on paddy fields has hit the region’s agriculture sector hard.

The contribution of agriculture to region’s Gross Domestic Product (GDP) has declined 11 percent in 12 years. The survey reveals that during the fiscal year 2004-5, agriculture contributed 28 percent to Kashmir’s GDP. Now its contribution has dipped to a mere 17 percent.

According to the survey, the conversion of agricultural lands into residential colonies and commercial complexes has resulted in a sharp decline in jobs. The workforce employed in the agriculture sector of Kashmir has declined from 85 percent in 1961 to 28 percent at present.

Javaid Ahmad Hurra, a fruit grower from central Kashmir, says climate change in Kashmir has also had a major impact. He says unseasonable rainfall and belated snowfall has been hitting the sector hard and the people associated with the business have incurred losses every year.

Javaid has a small orchard of two hectares where he grows apples and sells the fruit to dealers. He used to work paddy land, but shifted from agriculture to horticulture in hopes of turning a profit. However, according to Javaid, his earnings have been low over the past five years and he too is planning to sell land to start some other business.

Last year, the Kashmir Valley witnessed a prolonged dry spell during the peak winter months. The level of rivers fell, causing scarcity of water and hydroelectricity in the region.

According to the advocacy group Action Aid’s 2007 report on climate change in Kashmir, average temperatures in the region have shown a rise of 1.45 C., while in the Jammu region, the rise is 2.32 C.

Javaid says this March, unseasonal snowfall caused heavy losses to the farming community of Kashmir, which was already reeling under the crises due to five month long violent protests of 2016 and devastating floods of 2014.

“The farmers are now seeing an easy way to earn money. They sell a hectare of land every year and live a life of comfort. Why would we want to incur losses and gain nothing?” said Javaid.

The Food and Agriculture Organisation of the United Nations (FAO) is actively pursuing its vision for sustainable agriculture production systems across the globe and focuses on ways to ensure the transition to sustainable practices. The FAO focuses on managing ecological, social and economic risks associated with agricultural sector production systems, including pests, diseases and climate change.

It is also working on identifying and enhancing the role of ecosystem services, particularly in terms of their effects on resource use efficiency and response to risks, as well as their contribution to environmental conservation; and facilitating access to needed information and technologies.

For Ghulam Nabi Dar, a farmer from central Kashmir’s Budgam, still holds out hope the sector can be revived.

“We need a proper market for agriculture and also we need to have a proper irrigation system in place, which at present is missing. If an international agency would come forward and introduce the latest technologies and strategies, the sector would get a new life,” Dar told IPS.