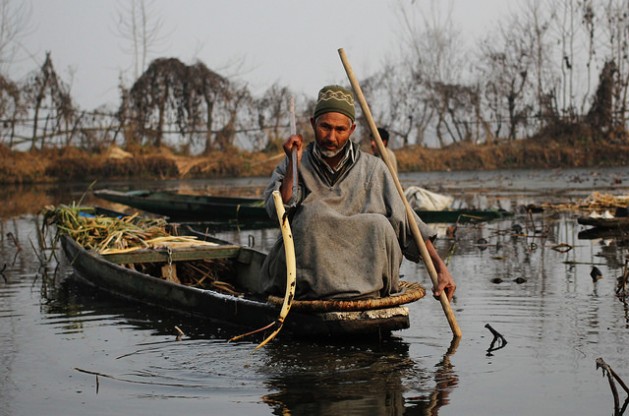 SRINAGAR, Feb 22 2017 (IPS) - Mudasir Ahmad says that two decades ago, his father made a prophecy that the lake would vanish after the fish in its waters started dying. Three years ago, he found dead fish floating on the surface, making him worried about its fate.

Like his father, Ahmad, 27, is a boatman on Kashmir’s famed Nigeen Lake, located north of Kashmir’s capital, Srinagar. He says the lake has provided a livelihood to his family for generations, but now things are taking an “ugly turn”.

“The floods of September 2014 wreaked havoc and caused heavy loss to property and human lives. That was the first signal of how vulnerable have we become to natural disasters due to environmental degradation." --Researcher Aabid Ahmad

The gradual algae bloom in the lake, otherwise known for its pristine beauty, led to oxygen depletion. Fish began to die. Environmentalists termed the development the first visible signs of environmental stress in the lake.

But no one was more worried than Mudasir himself. “We have been rowing boats on the lake for centuries. My grandfather and my father have been fed by this lake. I also have grown up here and my livelihood is directly dependent on the lake,” Ahmad told IPS.

He believes the emergence of rust-coloured waters is the sign of the lake dying a silent death, and he holds everyone responsible. “We have built houses in an unprecedented way around its banks. The drainage from the households directly drifts into the lake, making it more polluted than ever,” Ahmad said.

Blessed with over 1,000 small and large water bodies, the landlocked Kashmir Valley, located northern India, is known as the land of lakes and mountains. However, due to large scale urbanization and unprecedented deforestation, most of the water bodies in the region have disappeared.

A recent study by Kashmir’s renowned environmentalists Gowher Naseem and  Humayun Rashid found that 50 percent of lakes and wetlands in the region’s capital have been lost to other land use/land cover categories. During the last century, deforestation led to excessive siltation and subsequent human activity brought about sustained land use changes in these assets of high ecological value.

The study concludes that the loss of water bodies in Kashmir can be attributed to heavy population pressures.

Research fellow at Kashmir University, Aijaz Hassan, says the Kashmir Valley was always prone to floods but several water bodies in the region used to save the local population from getting marooned.

“All the valley’s lakes and the vast associated swamps played an important role in maintaining the uniformity of flows in the rivers. In the past, during the peak summers, whenever the rivers would flow high, these lakes and swamps used to act as places for storage of excessive water and thereby prevented large areas of the valley from floods,” Hassan said. 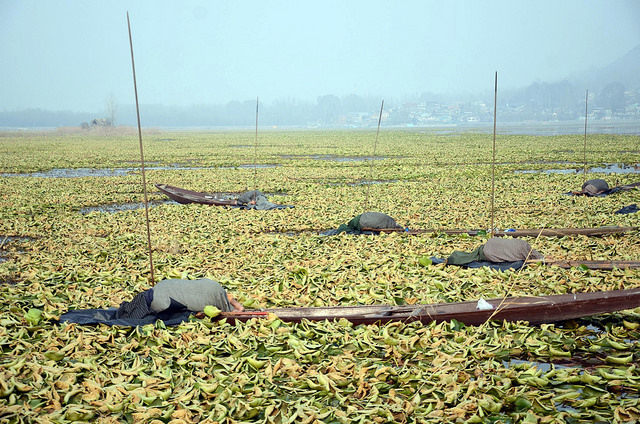 Fishermen cover their heads and part of their boats with blankets and straw as they wait to catch fish Kashmir’s Dal Lake. Credit: Umer Asif/IPS

India’s largest freshwater lake, Wullar Lake, is located in North Kashmir’s Bandipora area. It too is witnessing severe degradation due to large-scale human intervention. Wullar Lake, which claimed an area of 217.8 sq. km in 1911, has been reduced to about 80 sq. km today, with only 24 sq. km of open water remaining.

Environmentalist Majid Farooq says large areas of the lake have been converted for rice cultivation and tree plantations. According to him, pollution from fertilizers and animal waste, hunting pressure on waterfowl and migratory birds, and weed infestation are other factors contributing to the loss of Wullar Lake’s natural beauty. The fish population in the lake has witnessed a sharp decline due to depletion of oxygen and ingress of pollutants.

Another famed lake known as Dal Lake has shrunk by 24.49 per cent in the past 155 years and its waters are becoming increasingly polluted.

The lake, according to research by the University of Kashmir’s Earth Science Department, is witnessing “multiple pressures” from unplanned urbanisation, high population growth and nutrient load from intensive agriculture and tourism.

Analysis of the demographic data indicated that the human population within the lake areas had shown “more than double the national growth rate.”

Shakil Ahmad Ramshoo, head of Department of Earth Sciences at University of Kashmir, told IPS that the water quality of the lake is deteriorating and no more than 20 percent of the lake’s water is potable.

“As the population increased, all the household sewage, storm runoff goes into the Dal Lake without any treatment — or even if there is treatment done, it is very insufficient. This has increased the pollutant load of the Dal Lake,” he said.

According to Ramshoo, when the study compared the past water quality of the lake with the present, it found ingress of the pollutants has increased and the lake water quality has deteriorated significantly.

According to the region’s tourism department, over one million tourists visit Dal Lake annually and around 300,000 people are directly and indirectly dependent on the lake for their livelihood. The multimillion-dollar handicrafts industry of Kashmir, which gives employment to over 200,000 people, is also heavily dependent upon the arrival of tourists in the region.

A study on the Impact of Tourism Industry on Economic Development of Jammu and Kashmir says that almost 50-60 percent of the total population of Jammu and Kashmir is directly or indirectly engaged in tourism related activities. The industry contributes 15 percent to the state’s GDP.

However, Mudasir Ahmad, whose livelihood is directly dependent on the lake, says every time he takes tourists to explore the lake in his Shikara (a boat), he is asked about the murkier water quality.

“My grandfather and even my father used to drink from this lake. The present situation is worrisome and if this goes unabated, tourists would cease to come. Who would spend money to see cesspools?” Ahmad said.

Fayaz Ahmad Khanday, a fisherman living on Wullar Lake, says the fish production has fallen drastically in the last three years, affecting both him and hundreds of other fishermen.

“Fish used to be present in abundance in the lake but now the scarcity of the species is taking toll. Every day we see dead fish floating on the lake’s waters. We really are concerned about our livelihood and the fate of the lake as well,” Khanday lamented.

The fisherman holds unplanned construction around the lake responsible for its pollution. Aabid Ahmad, a research scholar in Environmental Studies, says Kashmir has become vulnerable to natural disasters as region’s most of the water bodies have either disappeared or are shrinking.

“The floods of September 2014 wreaked havoc and caused heavy loss to property and human lives. That was the first signal of how vulnerable have we become to natural disasters due to environmental degradation,” Ahmad told IPS.

But, for Shakeel Ramshoo, it is still possible to restore the lakes and water bodies of Kashmir.

“Hutments in the water bodies should be densified with STPs (Sewage Treatment Plants) installed in every household. Land mass can be removed and the area of the water bodies would increase. Also, the sewage treatment mechanism should be better so that the ingress of pollutants is ceased,” Ramshoo said.