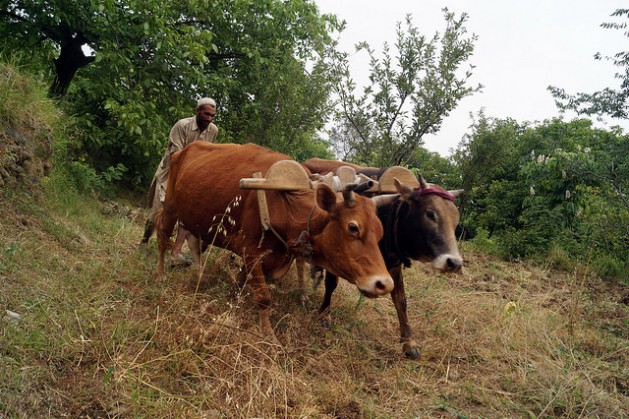 Mukhtar Ahmad ploughs his farm in Kashmir Valley. Prolonged drought due to warming temperatures has cast a shadow over agriculture in the region. Credit: Umar Shah/IPS

SRINAGAR, India, May 10 2016 (IPS) - Trudging barefoot on his two-acre piece of land, 57-year-old Mukhtar Ahmad has little hope of growing any crops this year due to the sudden dry spell that has struck Kashmir’s winter.

Floods in 2014 had already wreaked havoc upon the region’s agricultural production, destroying Mukhtar’s small farm as well.  He was hoping for a better harvest this year, but the changing climate is casting a shadow over this crop too.

Kashmir has been witnessing unusually dry weather conditions for the past few months. Even during the core winter period, precipitation remained extremely low. There was no snowfall in the upper reaches of the valley this year, with even the harshest period of winter in Kashmir, locally known as Chilla-i-Kalaan, passing with barely a flake.

According to the advocacy group ActionAid’s 2007 report on climate change in Kashmir, average temperatures in the region have shown a rise of 1.45 C., while in the Jammu region, the rise is 2.32 C.

Tourist resorts that used to record at least four to five feet of snowfall have received just a few inches this year.

Drought and rising temperatures have serious implications for the entire region, with impacts on millions of people in Pakistan who rely on Kashmir for water. According to the executive director of the Global Change Impacts Studies Centre in Pakistan, Dr Irshad Muhammad Khan, 75 to 80 percent of water flows to Pakistan as melt from the Himalayan glaciers.

As rivers dry up, transboundary water sharing between India and Pakistan will come under severe strain, experts warn – a situation likely to occur in other parts of the world as well.

Meanwhile, the sprouting of plants and blooming of some flower varieties—signs of spring in Kashmir—started at least one month ahead of the natural process due to the early warm temperatures. If there is a frost now, the crop could be ruined.

According to environmental experts, continued dry spells bode ill for agriculture in Kashmir.

Dr. Shakil Ahmad Romshoo, former head of the Earth Sciences department at the University of Kashmir in Srinagar, India, has conducted several studies on the impact of climate change in the state of Jammu and Kashmir.

Professor Romshoo noted that more 70 percent of the valley’s reservoirs rely on snowmelt.

“Proper snowfall is necessary for the suitable growth of crops and fruits, which could be affected due to less precipitation,” he told IPS.

For farmers like Mukhtar Ahmad, things are going from bad to worse this year.

“There has never been such a dry spell witnessed – ever,” Mukhtar said.

He is not alone in his concerns. For Kashmir’s horticulture industry, which provides livelihoods to some 30 percent of the state’s population, the freakish weather conditions will likely bring further losses. Fruit growers expect a decline in growth and size of fruit and also damage to the trees.

The changing weather patterns have also resulted in falling water levels in Kashmir’s rivers, which will cause a decline in the state’s hydroelectricity generation. It is currently around 2,457.96 MW, comprising 758 MW in the state sector, 1,680 MW in the central sector and 17.5 MW in the private sector.

“The present weather conditions will have an adverse impact upon power generation this year as the water level in the rivers has already started receding,” N. A. Kakroo, general manager of the State’s Power Development Corporation, told IPS.

The dry spell has also made a severe dent in Kashmir’s tourism industry, with winter sports remaining shut this year.

Kashmir’s famous tourist resort Gulmarg used to attract skiers from around the world. But with the lack of snowfall, the resort is now deserted.

Ayaz Rashid, a ski instructor at Gulmarg, says that such an extreme dry spell has never been seen in Kashmir. Tourist resorts that used to record at least four to five feet of snowfall have received just a few inches this year.

“Such amount of snow is no match to the usual amount and ski lifts get operational only after two feet of snow. We haven’t received that much snowfall this year,” says Rashid.

Insha Nabi, a researcher at Kashmir University, notes that degradation of the natural resource base and increasing pollution, deforestation, soil erosion, and land degradation are also hindering economic development in rural areas.

She says the effects of the global warming effects are being felt in Kashmir, and its impacts could be even harsher during the summers.

“Climate change has posed a major threat to the pace of development, firstly due to increased frequency and intensity of hydro metrological hazards such as floods, droughts, heat waves, cyclones, storms,” Insha said.