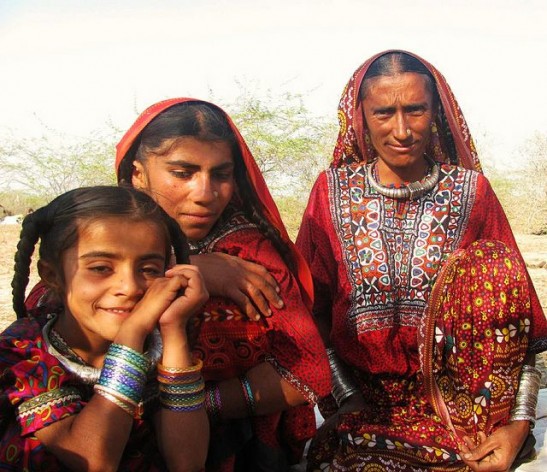 Suma Bhen, a camel breeder in the western Indian state of Gujarat, and her two daughters. Credit Athar Parvaiz/IPS

KUTCH, India, Jun 18 2014 (IPS) - When Sangan Bhai, a humble man in the Kutch region of India’s western state of Gujarat, was offered a position as an executive member of the local camel breeder’s association, he made a decision that surprised his community: instead of accepting the prestigious post he offered his wife’s name instead.

His reason, he told IPS, was a simple one; unlike him, his wife can read and write, and has as much experience rearing camels as anyone in the community.

“Sometimes we don’t have much to eat, but we can live with this – what we can’t live without is water.” -- Suma Bhen, head of a family of camel breeders
Meera Bhen, the only woman in the area to have attended school – albeit only up to the fourth grade – was more than willing to step up to the challenge.

“My father was very keen to educate me, but he died when I was very young so I had to drop out of school,” she told IPS. “But I kept practicing reading and writing as I grew up.”

Her perseverance has paid off; she is now one of the few people in the vast arid area known as Lakhpat who can read, write and do basic arithmetic, crucial skills in this community of herders and breeders who have scant formal education, though their knowledge of cattle is unmatched.

Now, Meera Bhen is making history, not just locally but nationally, as her brainchild for the 350-member breeder’s association, known as the Kutch Unt Uchherak Maldhari Sangathan (KUUMS), begins to bear fruit.

“She was the first to suggest that we market the camels’ milk,” KUMMS President Bhikha Bhai Rabari, told IPS. “So we approached a dairy company with the idea, and as soon as the project takes off we will receive double the price for our product.”

A litre of camel milk currently sells for 17-20 Indian rupees (less than 0.30 dollars), making it nearly impossible for this semi-nomadic tribal community – who are thought to have migrated to the Kutch region from Pakistan’s southwestern Balochistan province over a thousand years ago – to support itself financially.

Some 37 percent of the nearly 300 breeders in the region manage herds of 31-60 camels, but with few formal markets for the milk, they are forced to rely on government food rations.

The breeders, known locally as maldharis, have long expressed a desire for supplementary income. Decades ago, they made a decent living by offering up their camels for transport, or by selling the males for a high price. With the advent of modern transportation systems and the penetration of road networks into rural India, however, they have been increasingly marginalised.

It was these very problem that Meera Bhen hoped to address when she first brought her idea to the association.

If the marketing initiative succeeds, it will represent the first-ever commercial camel milk enterprise in the country. The original scheme, submitted to the state government by the Kutch District Milk Union in 2012, proposed the setting up of a processing unit with a capacity of 2,000-2,5000 litres.

According to officials, the purpose of such an undertaking was two-fold: to provide an alternative livelihood for the maldharis and to promote increased consumption of the highly nutritious milk, which is lower in fat than cow’s milk, and contains more nutrients per single serving.

Given that Gujarat is the birthplace of the massive Amul dairy cooperative, which agreed in 2012 to brand and sell the camel milk, the scheme seemed almost foolproof.

Last year, however, it ran into a legal hurdle: according to current laws governing dairy production, ‘milk’ is only defined as that which comes from cows, buffalos, sheep and goats.

NGOs and legal experts are working to amend the law to include camels, but until they do, the project is at a standstill.

Few people are aware that a humble woman was behind the proposal that has made national headlines. But here among the breeders, Meera Bhen is just one of many women who enjoy a far greater degree of autonomy and respect than their counterparts in this country of 1.2 billion people.

A buffalo for a baby girl

While many families across India lament the birth of daughters, breeders in the Banni area of the Kutch region do the opposite: they allocate a buffalo to every single girl child born to a member of their community. 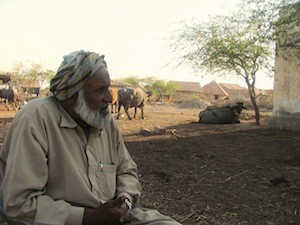 Razia Saleem is one of these girls. A student in the eighth grade, her inheritance already amounts to roughly 3,400 dollars – all in the form of a herd of buffalos.

“This all belongs to her,” the girl’s father, Saleem Nodae, told IPS, gesturing at the grazing beasts. His three other daughters each ‘own’ their respective share of his herd of roughly 80 animals.

Until they are old enough to tend to the creatures themselves, the girls receive part of the monthly income generated from sales of the buffalos’ milk, so they can “buy the things they want,” Saleem added. The rest goes to feeding and caring for the animals.

For their own part, the girls use their allowances wisely. Razia recently spent three years’ worth of her savings to buy a desktop computer. “This is the age of technology,” she told IPS. “I want to benefit from it.”

Right now she mainly uses the machine to practice her typing, and for digital art. “I will start using the Internet only when I really need it,” she added.

According to Saleem, allotting a buffalo to a girl at the time of her birth is an investment worth making.

“By the time she is married, she will have five or seven animals to her name. She can take these creatures to her in-laws with pride,” he said, which will allow her a degree of independence.

Some 10,000 breeders live in Banni, tending to over 168,000 buffalos. The maldharis here are more economically independent than their camel-rearing counterparts, largely owing to consistent demand and formal markets for buffalo milk.

Even so the nomadic breeders live simple lives, moving with their herds over the grasslands for most of the year and residing in modest dwellings during the monsoon season.

Life for women breeders is far from easy. While they are allowed a degree of independence and respect, they shoulder a disproportionate level of the community’s burdens, such as finding water in the dry landscape.

Suma Bhen, who heads a family of camel breeders, says her closest source of water is a dam located roughly eight kilometres away. The journey through the scorching heat is made on foot, leading a camel whose energy must be conserved for the long trip back.

“The camel carries 70 litres of water, which we use for two days,” Eisa Taj, Suma Bhen’s husband, told IPS. “But this is barely enough for all our needs.”

Suma Bhen makes sure her family conserves every drop, using dry soil to scour out their plates and cooking utensils after every meal so as not to waste any of the precious water.

“Sometimes we don’t have much to eat,” Suma told IPS. “But we can live with this – what we can’t live without is water.”

Their son, Saleh Alma, who had hidden himself inside the family’s humble home during the interview, eventually emerged with a scrap of paper on which he had scribbled the message: “It is very difficult for us without water. We want the government to help us.”